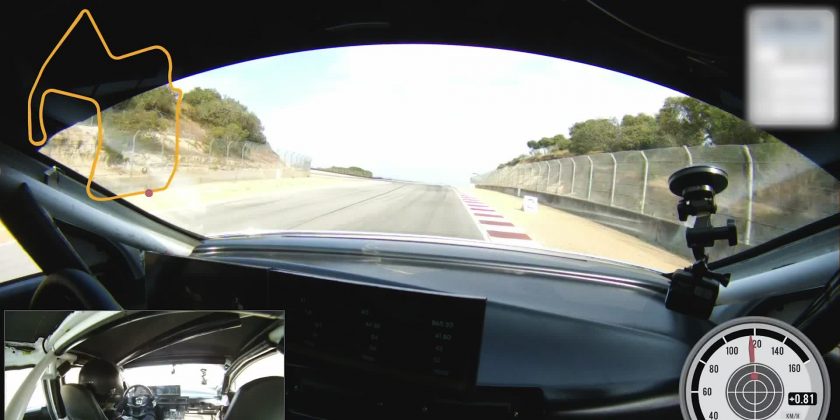 The Lucid Air luxury electric sedan lowered its own lap record at Weathertech Raceway Laguna Seca by a whopping 10 seconds when it clocked a 1:31.3 during chassis testing.

A month before, professional driver Randy Pobst had lapped Laguna in 1:35. So that would mean the Lucid Air was faster. At least at that moment. These things change rapidly, because just six days ago a Tesla Model S Plaid laid down a 1:30.3. So for this moment, Tesla still leads, as far as we can tell. Here’s a video of the Tesla Model S Plaid lap, driven by a YouTuber who calls himself Sebastian Vittel (not the F1 driver). The only mods on the Tesla were said to be a custom set of Michelin Sport Cup 2 tires and a driver’s racing bucket seat.

The Lucid Air that did the lappin’ was equipped with a “development version” of the company’s tri-motor powertrain configuration. Lucid said the lap was set, “right out of the box,” whatever that means.

Two years ago the Lucid team set a mark of 1:41, though it’s not stated what that powertrain configuration was, whether it was one, two, or three motors. The Lucid lap was set by John Culliton, a senior mechanical engineer at Lucid Motors, “and not a professional driver from outside the company,” Lucid pointed out, perhaps referring to Pobst. It’s also not clear which wheels and tires were on the car. Lucid said, “The development car, while riding on wider-than-stock wheels and tires, nonetheless used street tires and production brakes.”

“We will continue to ‘show our work’ as the company does the important work of tuning the platform and vehicle systems heading into production for the Lucid Air, which starts in spring of 2021,” Lucid said in a statement. “Meanwhile, work on the tri-motor car will continue in parallel as a development project, and we look forward to sharing more of its achievements in the future.”

This version of the Lucid Air won’t be available at launch, however. At launch the car available in Lucid showrooms will be the Dream Edition, which will cost a whopping $161,500. And instead of the 130-kWh battery that was initially said to go 517 miles, the Dream Edition will get a 113-kWh battery pack that’ll go 503 miles (still plenty far).

Other Dream Edition specs include: 1,080 hp from front and rear motors; 0-60 in 2.5 seconds; standing quarter mile in 9.9 seconds; fast charging that’ll get you 300 miles range in 20 minutes; coefficient of drag of 0.21. The claim that is still on the Lucid consumer website that the car will go “over 200 MPH” was missing from the press release distributed at the car’s launch. The highest speed of any model listed there was 168 mph for the Dream Edition.

“We managed to surprisingly beat the Teslas Plaid Model S lap record (at the time) with our comparably underpowered Model 3,” said Ben Schaffer of Unplugged Performance. “Since then these 1000+hp electric monsters are just crushing records out there. Lucid put down a crazy lap…Tesla put down an even crazier lap of 1:30. The competition is fun to watch indeed and will result in better cars for us all to play with! I can’t wait for us to get our hands on Tesla’s newer battery tech and tri-motor power. More lap records will fall and ICE car lap records will soon become a thing of the past.”

Horsepower wars for the 21st century. What do you think about the perfomance battles taking place on the EV front? Sign up below to leave comments and let us know. We want to hear your opinion!