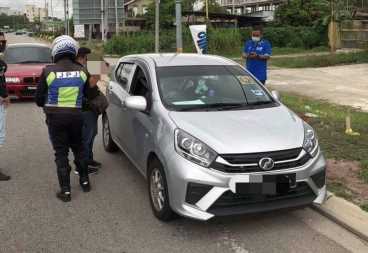 Times are tough, and so earning income when and where you can is a good thing, but it really shouldn’t be an excuse to indulge in subterfuge while going about it. Such is the case with some ride-hailing drivers in Seberang Perai, who were nabbed by the Penang road transport department (JPJ) for attempting to deceive passengers as well as their service providers.

The department recently carried out operations to crack down on ride-hailing drivers for charging higher fares than shown on the app, Bernama reports. It was acting on complaints by the public that some drivers were overcharging people when transporting them from the Covid-19 quarantine and treatment center at Mara Excellence Centre (MEC) in Jawi, where they had finished their quarantine, to the bus stop at the police district headquarters (IPD) nearby.

The distance isn’t very far, just a couple of km away, effectively making it a five minute trip. What the JPJ found was that a good number of ride-hailing drivers weren’t really using the app and, in some cases, were charging well above normal for the short trip, making them no better than teksi sapu. A total of 14 vehicles were stopped by the department, and 11 drivers were caught out for not doing things above board. “During the operation, drivers of 11 vehicles were found to be using the app price guide but not pressing the ‘accept’ button after passengers had agreed to the fare. This would mean they would not have to pay the 20% commission to the app company,” said state JPJ director Adenan Md Isa.

He said the drivers would prey on patients coming out of quarantine at the MEC and those waiting outside the IPD. “Some deliberately raise the price by up to RM20, although it’s different on the app,” he said. He added that the 11 drivers will be investigated under Section 12(5)(d) of the Land Public Transport Act 2010.

The department said that such operations will be held continuously, and action will be taken against ride-hailing drivers who flout the rules and laws that have been set for public interest.