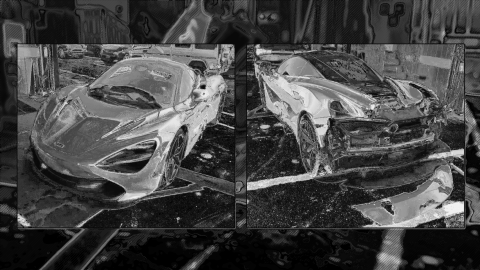 It’s sad to see our favorite exotic cars get crashed by their careless, well-to-do owners, but it’s even worse when they’re left to rot at unsuspecting junkyards across the country—much like this McLaren 720S that’s sitting, waiting for someone to restore it to its former world-beating glory. Supposedly tarnished by floodwaters after its relatively short life in Texas, the Macca is now in sore shape with unspecified damage to the body and underpinnings. Is it still worth the minimum take-home bid of $125K? Maybe, but it depends on your level of skill, and sanity.

From the factory, this was a 710-horsepower piece of British art that could best Ferrari 488 GTBs on-track while clobbering Dodge Challenger Hellcats in a straight line. With a twin-turbo, 4.0-liter V8 and lightning-quick dual-clutch automatic, it features the most potent powertrain in McLaren’s lineup short of the Senna track weapon. The 720S also rocks a $297K base price, making it far more expensive than your typical scrapyard flip.

The Copart listing doesn’t nail down exactly how the 720S was flooded, but we do know one thing—it wasn’t linked to that viral McLaren Houston photo that was snapped back in September. Despite the image showing what looks like a row of supercars underwater, the dealership confirmed no customer cars or for-sale units were harmed as a result of the 43 inches of rain which hit the area after Tropical Storm Imelda.

Still yet, the cyclone could’ve played a factor in parking this machine. If you just so happen to be a McLaren mechanic—or have one on retainer—then you might get your money’s worth as the salvage auction’s reserve price sits at under half the cost of a new model. It might never amount to more than a rebuilt title, but it has the potential to be a budget-ish build for someone looking to land in one of the automaker’s greatest cars to date.

So long as you can get past the rear-end damage, there might be a case to scoop up this burgundy Brit. It allegedly runs and drives, and the odometer reads just 791 miles although the listing says that might not representative of the actual figure.

It’s sitting at a Los Angeles-area lot right now with a current highest bid of $109,000. Hurry quick, though, as this sale ends today.