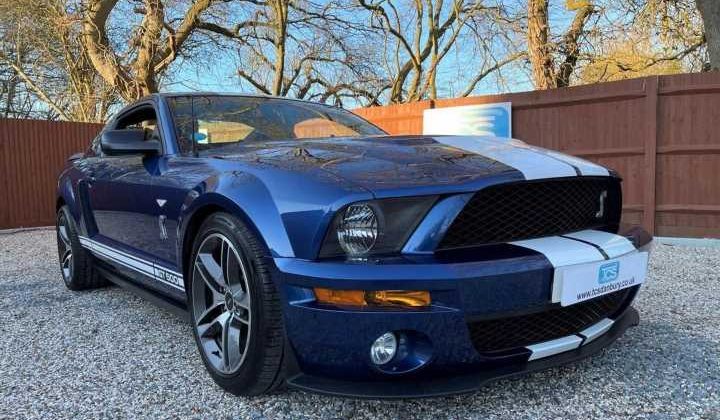 Who is brave enough to sally forth in this 600hp Mustang?

The Ford Mustang might not be the world’s most respected sports car dynasty, but it is unarguably the most successful. There have been plenty of misses during 56 years and six generations – the 1974 Mustang II’s emissions-strangled 130hp 5.0-litre V8 stands out as a low point – but in terms of volumes, it’s the daddy. With total production past ten million Ford has shifted twice as many Mustangs as Chevrolet has sold Camaros, and it has outsold both the Porsche 911 and Mazda MX-5 by more than ten to one.

The vast majority of Mustangs never leave the U.S., and any which reached Blighty prior to the arrival of the first officially imported right-hookers in 2015 are already much rarer and exotic than they would be in their homeland. But given the combination of simple underpinnings and comprehensive parts support – even with the occasional need for air freight – very few of these can be considered truly daring. Which is why you haven’t seen one as a Brave Pill.

Clarkson voice on: until now. Because this is a Mustang that makes the grade on cost, complication and crashability, a tuned version of one of the fastest factory cars. A 600hp supercharged Shelby GT500 is courageous however you look at it. Regular Mustangs tend to have all the spice and bite of America’s bland mustard, their mouth-to-trousers ratio skewed heavily leftwards. But the Shelby versions are closer to automotive jalapenos.

Myth and legend has long since been blended when it comes to the story of Carroll Shelby’s long career. But there is no doubting his ability as a racer and his nous as a performance car constructor. This is the man who combined a lightweight AC Ace chassis and a Ford V8 to create the widow-making cobra, and his involvement in the creation of the GT40 is entertainingly fictionalized in Ford v. Ferrari.

But it was the smash-hit arrival of the Ford Mustang that gave Shelby the chance to build a car capable of selling in volume. The Ford-sanctioned Shelby GT350 was launched in 1965 and proved an immediate hit, but the brawnier GT500 that arrived in 1967 was the daddy, mighty enough to kick sand in the faces of lesser muscle cars and steal their lunch money, with a 7.0-litre V8 that made 360hp in its gentlest guise and considerably more when tuned.

The original collaboration didn’t last beyond the ‘sixties, but when Ford launched the S-197 fifth-generation Mustang in 2005 Shelby’s then company started work on a tuned version using a supercharged V6, and then a 4.6-litre V8. These weren’t official models, but Ford did use Shelby branding for a slightly retuned Mustang GT, and also signed a deal to bring back the Shelby GT500 name for a range-topping performance version to be developed by Ford’s Special Vehicles Team.

The new GT500 duly arrived in 2006, powered by a supercharged version of Ford’s 5.4-litre 32-valve V8. This was related to the engine of the Ford GT, although it used a cast iron block instead of the supercar’s all-aluminium motor. The Mustang also lacked dry sump lubrication and had a less advanced Roots-type compressor. But it was hard to argue against the effectiveness of the end result. With 500hp the GT500 had just 50hp less than the GT.

Performance was correspondingly bristly – one U.S. magazine extracted a 4.5-second 0-60mph run and a 12.6 second quarter mile in the new GT500. But technical sophistication was considerably more limited. This generation of Mustang still used the combination of MacPherson struts at the front and a live axle at the rear. The extra mass of the supercharger, intercooler and heavier duty engine block added about 70kg of front-end weight compared to the not exactly svelte Mustang GT. The result was a car that was hugely fast in straight lines, but less keen on changing direction, with contemporary reviewers reporting a marked tendency to understeer under enthusiastic use. I never drove this generation of GT500, but I remember the even more potent alloy-block 662hp version that came in 2013 having a live-and-let-die traction control system which didn’t seem to intervene until the car was practically pointing backwards.

None of the S-197 Mustang family were officially brought into to the UK, but the car’s early years corresponded to a very favourable dollar-to-pound exchange rate – this fell as low as 2:1 in late 2007 – which led to a substantial number of parallel imports. Most of these were the cheaper versions that still look like bargains once shipping costs and duties were paid, it was possible to get a base Mustang for about the same as an entry-level Golf. But it also also gave those with bigger budgets a chance to get cheap muscle from the other end of the line-up.

According to the Essex dealer selling it, our Pill was first registered in Los Angeles in May 2007 and was imported to the UK just five months later. It has been here ever since, with the advert detailing an impressive rigorous service regime which seems to have been carried out on time rather than mileage: it has never gone more than 6,000 miles between oil changes, and frequently less than 2,000. A sneaked peek at the MOT history backs up the mileage and attention to detail, the only advisories being for worn front tyres and the single fail for a poorly aimed headlamp.

Having been engineered to meet Ford’s durability standards, the GT500’s powertrain left a fair amount on the table and it didn’t take long for buyers to realise the supercharged engine could be persuaded to up its game. The vendor of our Pill reports it is now running 600hp, and although there are no details about how this increase has been achieved the obvious presence of a K&N filter in the under bonnet shot will be responsible for some of it. Regardless, it seems like a reasonably modest upgrade in keeping with the love that has clearly been lavished on the rest of the car.

Given the favourable exchange rate it was imported under – and an original base price of just $42,000 in the ‘States – it seems likely that the current £39,995 represents most if not more-than-all of what this GT500 cost its first British owner. Yet the price doesn’t look outrageous considering the performance, the condition and the Shelby backstory. Just be very respectful on a damp or slippery road – or when enthusiastically leaving the Cars and Coffee events that seems to lead to the majority of Mustang bloopers on YouTube. This is a ‘Stang with a sting.