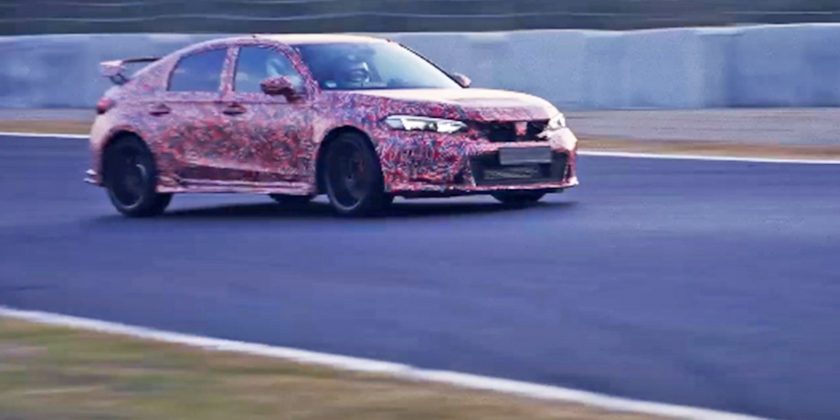 Honda is milking the Civic Type R teasers for all their worth because a month after it released still images of the camouflaged, upcoming hot hatch testing at Suzuka, it’s now marking the still-camo’d prototype’s public debut with a video of it doing the exact same thing, very likely shot on the same day as the already-released pictures.

Attendees of this weekend’s Tokyo Auto Salon will be able to see this car up close, in the metal. But for those who can’t make it to Japan, here are 80 seconds of the new Civic Type R both tearing it up and getting torn down at Honda’s home race track. Based on some of the audible engine noises that sound pretty similar to the existing Type R’s, it’s reasonable to predict that this version will continue to be powered by a 2.0-liter turbo-four.

Beyond that, we know as much about the Type R as we did a month ago. It’ll be based on the new and very good Civic hatch and, like its predecessor, will rock a big spoiler, Brembo brakes, three exhaust tips, and is being developed by a gang of very serious-looking, Sparco shoe-wearing, Japanese engineers. Freeze-framing the video, the red bucket seats look rounder in shape this time around; other than that, though, it’s all hearsay. Some say it could eventually get an electric rear-axle and a total of 395 horsepower but Honda has yet to give any hints as to whether those rumblings hold any water.

In any case, it looks like Honda is benchmarking the previous-gen CTR when testing this new one—a bit of a flex, if we’re honest, but not one I can necessarily argue with given how good that car still is. When The Drive deputy editor Kristen Lee drove the swansong Limited Edition last year, she called it “very nearly perfect,” pointing to it as a very big pair of shoes that this new one will need to fill. When I had the privilege of driving it a year before that, I essentially said it was the last car you’d ever be compelled to buy. Let’s hope this potentially hybrid-powered follow-up will prove me wrong.

Got a tip or question for the author about the new Type R? You can reach them here: [email protected]