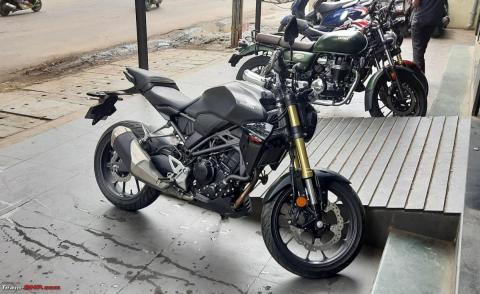 After 36 days of waiting, the parts arrived broken and now I’m forced to wait another 2 weeks.

BHPian mrgawde recently shared this with other enthusiasts.

I bought my first motorcycle, a brand new red CB300R from Honda Big Wing (Worli Showroom, Mumbai). Words cannot describe how excited I was! If only I knew that this was the start of a long painful journey dealing with Honda Big Wing and their representatives. Within the first 20 mins of riding the bike on the very first day the engine cool light had come on, I was a bit surprised as there was no traffic on the streets and it wasn’t a particularly hot day. I decided to let some time pass and see if the issue persisted. Since this is my first bike, I never knew what a radiator should sound like so I assumed the bike was functioning normally, since it was a brand new bike.

In the next 4 days, I took the motorcycle on quick 5 minute rides across town, the cool engine light would switch on and off occasionally.

4th of August – The Incident

5 days after my purchase of the bike I was travelling on the highway in heavy traffic. I noticed that the engine light was on and for the first time I felt the heat of the engine on my legs. A taxi driver who was passing told me coolant was leaking from my bike. In a state of shock and disbelief, I had to swerve through traffic to get my bike to the side of the road and immediately smoke started billowing from the engine. At this point I was panicking and wasn’t sure what to do, the dealer did not even provide me with an RSA number. So my first priority was to shut off the engine and walk the bike to a secure area. In the midst of this, a nearby samaritan told me sometimes the coolant for a new bike is topped up extra and that I shouldn’t worry. In the next 30 minutes of my efforts to get my motorcycle back safely, I had to run it fast through cool air and take regular stops when that wasn’t an option. I am very thankful to the taxi driver who pointed out that the coolant was leaking. Being a new driver, being in such a startling situation could have led to a much worse accident, thankfully I am alright.

The next day, I took my bike to the Worli service centre. Upon investigation, they found that the fan in my bike wasn’t spinning and looking deeper found a piece of cardboard jammed inside the fan.

A BRAND NEW MOTORCYCLE CAME FROM HONDA BIG WING WITH CARDBOARD STUCK INSIDE THE RADIATOR.

I was in a state of disbelief. The level of negligence was just too high, and that too for a premium motorcycle. I shudder to think of what could have happened due to their negligence, thankfully I am alright despite Honda Big Wing’s best efforts. After coming to terms with the fact that they sold a motorcycle with a piece of cardboard stuck in the radiator I asked on what the process would be to repair their own error. They told me the part isn’t available in stock and will need to be ordered and that it could take about 2 weeks. I left the bike at the service centre and went home.

I would be in constant touch with the service head of Honda Big Wing for Mumbai (Frank) and the sales lead of Honda Big Wing Mumbai (Vijay), unfortunately, there were no updates. At one point the service head sent me an invoice for the parts that needed replacement. I was a bit taken aback as the fan had broken due to cardboard that they had forgotten to remove inside the radiator on a 5-day-old bike! Deliver a faulty bike and make the customer pay for its repairs?

I maintained contact with the team in hopes that my bike would come back to me. On the 23rd of August (2 Weeks after the bike was left at the service centre), I was told the parts were still in the pending state which means that they have not even shipped the order from Delhi. I was told that the order would take another 10 days. Throughout this painful process, the service lead was quite rude and never bothered keeping tabs on my particular case, in fact, I had to call him and remind him each time. This is definitely not the service I expected from a premium 2-wheeler brand.

The service lead began to stop answering my calls. I was not incessantly, but it seemed that they had not procured the part yet. Finally, once they answered, I was told the order was in a ‘pending’ state. It had now taken 24 days to get a fan from Delhi. They refused to escalate the matter or offer any timeline for the repair.

10th of September – The parts finally arrive! Or have they? (36 days at the service centre)

36 days after I dropped off my bike at the service centre I get a call from the service lead. He informs me that the fan they ordered has arrived broken. I was now beyond annoyed, I asked them what they could do to fix it, and they said they’d order a new fan which would take another 2 weeks!!! The service lead even had the gall to suggest ‘glueing’ the old fan as an option if I am impatient. What a joke! It seems that Honda Big Wing doesn’t care about their customers after a sale. How can a premium line of motorcycles have such terrible support? I didn’t have the motorcycle for more than a week and now I am waiting for it for more than a month. If I had known about the terrible attitude that Honda Big Wing would carry and that I would have to wait for a month for my new motorcycle, just for it to feel like a patched-up second-hand one, I would have rather gone for a KTM Duke 390.

Here’s what BHPian neil.jericho had to say on the matter:

It’s unfortunate that you have had to suffer at the hands of a callous and indifferent Honda dealership. You certainly have the patience of a saint.

Do you have pictures of the bike, the damaged fan and the piece of cardboard that was stuck in it? If you do, please post them.

First things first, go to the Honda Big Wing website, and pull up the email ID or Contact Us box for the page. Explain your predicament. Put a link to this thread. I’m sure that this thread is getting widely circulated in the motorcycling community, both within Bombay and outside it. The last time I used this approach (though I’m not a Honda customer), the local Honda Big Wing dealership contacted me within 30 minutes and things began to move very quickly. It’s no surprise that they don’t want to escalate the matter internally. How are they going to explain to the company and the higher-ups at the dealership, that they didn’t properly do the PDI on your motorcycle?

Secondly, ask the local dealership to source the part from another Big Wing dealership, if it’s going to take another 2 weeks. It’s surprising to hear your local Honda dealership take such a laid-back approach to your problem.

Thirdly, if you are on social media, leverage it to your advantage.

Also, have you asked for a loaner bike? You should.

In this case, there is no reason for you to pay for the fan and/or any other associated parts.

I hope the staff at the Honda dealership finally see some sense and bring this to a speedy conclusion.

Here’s what BHPian swiftnfurious had to say on the matter:

Well – a very sad way to start the ownership. Having problems in a vehicle is ok – how the issues are resolved is what brings trust to that brand! After having a not-so-good experience with the service centre or parts availability for my CBR 250, I stopped recommending Honda vehicles to my friend circle.

The product may be super good, but the problem starts when something goes wrong! What good is a product if the parts are not available when it breaks?

From what I read on the groups, someone has to be extremely lucky for the Honda guys to even provide any support and that’s exactly why the dealerships act high-handed.

I honestly don’t have much good advice for you, maybe sending the link to this thread to Honda’s social media might work. Else, the time & effort-consuming Customer court proceedings are the only way!