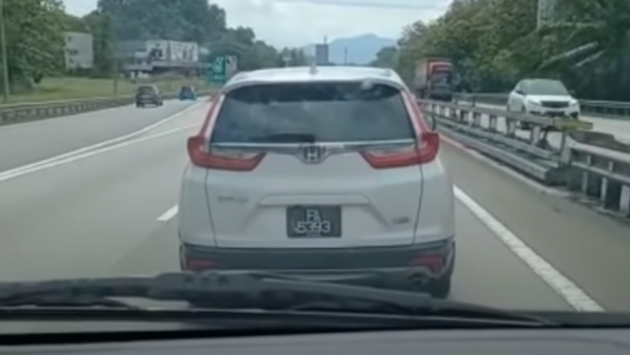 The Royal Malaysia Police (PDRM) has arrested the driver of a Honda CR-V for blocking an ambulance in Kampar, Perak. According to police investigations, the incident took place on May 15 at KM 292 (northbound) along the PLUS highway.

In a video that went viral recently, the white CR-V was seen driving along the rightmost lane and didn’t give way to the ambulance (horns and siren blaring!), even after being trailed for more than half a minute. The ambulance eventually overtook the SUV by using the left lane.

The incident caught the attention of health director-general Dr Noor Hisham Abdullah, who shared the video on his social media channels and described the driver as selfish.

Investigations found that the CR-V driver – a 62-year-old male – was suffering from tinnitus, or ringing in the ears caused by acoustic neuroma. He has been diagnosed with the condition since three years ago and is undergoing treatment at Universiti Malaya.

Regardless, Kampar police chief superintendent Mohamad Nazri bin Daud said appropriate action will be taken against the driver. Nazri also thanked the public for the video recording, which proved instrumental in its investigations. He added that the PDRM will continue enforcing the law to make sure the roads are safe for public use at all times.