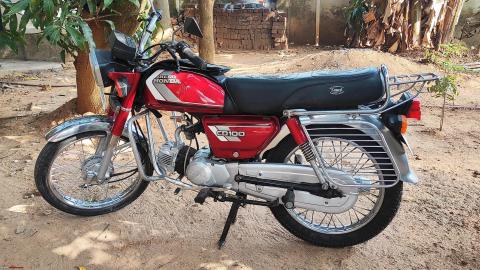 It truly was a fill it, shut it, forget it bike. Gave consistently above 70kmpl. I have always been a sedate rider and driver.

BHPian 9216 recently shared this with other enthusiasts.

Got my 1987 model Hero Honda CD100 re-registered for the 5th time. Done more than 3,20,000 km so far. It still sports the original carb, tank and silencer. Should be good for a few more years.

Here’s the story as much as I can recall. No log was maintained as my bike was more of a necessity. My work was nearly 30km from my home in a relatively remote place.

When I bought it, there were no service centres nearby. I have always been a DIY person, right from my childhood days. I wrote to Hero Honda for a copy of the workshop manual. Though they refused initially, I pestered them repeatedly (by postal letters : good old days ) and they finally budged and sent me a copy. Since then most of ordinary maintenance work was done by myself. Workshop service was done only when some serious work was needed. Always changed oil at 1500-1800km ( I think this is the only important maintenance needed). Never waited for anything to fail, changing parts with original spares well ahead of time.

It truly was a fill it, shut it, forget it bike. Gave consistently above 70kmpl. I have always been a sedate rider and driver. In its glory days, never once did it get me stranded on the way, except due to punctures. During the last few months I had two incidents. First was due to failed cdi unit. The second, kicker pedal started slipping due to its grooves getting worn out. I was stranded 1 km away from home. Could have started with a push from somebody, but chose to walk back home, get some tools and temporarily fix it.

Major repairs I can recall : Factory clutch disks changed at 115k, cylinder rebored and piston replaced at around 160k(done by me at home by getting reboring done at a lathe shop), crank replacement at about 185k, first full repaint at last registration in 2018, cam chain and sprockets were changed 3 times and valve seals twice. Had replaced the generator coil (ignition) once.

Several years back, while the bike was not used for a few months at a time, rats messed up the entire wiring. As luck would have it, local Hero Honda dealer had an original Japan made wiring harness lying in their stores. This was located because the sales person, who had served there for a very long time, remembered having seen it somewhere. They could not even bill it in their computer system, because it was not in the inventory. They wrote a receipt by hand instead. Unfortunately rats did their job again and had to replace the harness once more.

Every rear tyre lasted about 30-32k (irrespective of brands, MRF, Dunlop and Ceat) and front tyres about 55-60k. Presently using a 3.00″ tyre in the rear instead of 2.75″ due to local availability issues.

Presently, there is some slight growling noise from the clutch, possibly due to worn grooves in clutch outer. It is still original, though it was machined once. Also it is time to change disks.

One serious difficulty now is unavailability of spares, leave alone original spares. And rubber parts are not available at all. For over an year there was a slight leakage of petrol from the top of the carburettor bowl due to a hard and elongated o-ring and I could not get it anywhere online/offline. Fortunately I found that o-ring for Honda Activa is suitable. That problem solved.The rubber piece ( I don’t know what it is called) that connects the air filter with carburetor has become very hard and inflexible. I have a horror of breaking it while taking the carburetor out for cleaning. It may very well end the functional life of the bike.

One con for the bike is that the rear footrest is mounted on the swing arm and not on the frame, making the passenger feel every gutters on the road. This irritates me even today as it did 35 years back. This was, however, corrected in the later avatars of the bike, like CD100SS.