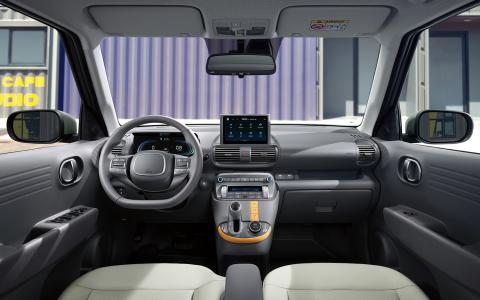 The Hyundai Casper would have taken on the Tata Punch in the Indian market.

The Hyundai Casper is the brand’s latest entry-level crossover offering, positioned below the Venue in their global SUV line-up. The Casper comes with compact dimensions measuring just 3,595 mm in length and a wheelbase of just a little over 2,400 mm.

However, even with the compact dimensions, the Casper offers an uncluttered cabin with sufficient space and plenty of features and equipment.

The dashboard consists of a fully digital LCD instrument cluster, a two-spoke steering wheel, a large floating infotainment unit and the HVAC and gear selector on the centre console. The Casper is also expected to come with ventilated and heated front seats, automatic climate control, cruise control, heated ORVMs, mood lighting and many other equipment.

However, the most significant feature of the Casper is the flat-folding front seats, which double up as a picnic table. The Casper also features recline function for the rear seats as well, offering a flexible cabin space for all passengers.

The Hyundai Casper will be offered with a choice of two engine options. This includes a 75 BHP 1.0-litre NA petrol unit and a slightly more powerful 1.0-litre turbo-petrol engine churning out 100 BHP. The crossover will further be offered with both manual and automatic transmission options.

The Hyundai Casper was initially expected to make its way to the Indian market as well. However, recent reports suggest that the Casper has been specifically designed for the South Korean market and may not make it to Indian shores anytime soon.