More than five years old it may be, but there’s still enough to enjoy about the raffish two-door Jag 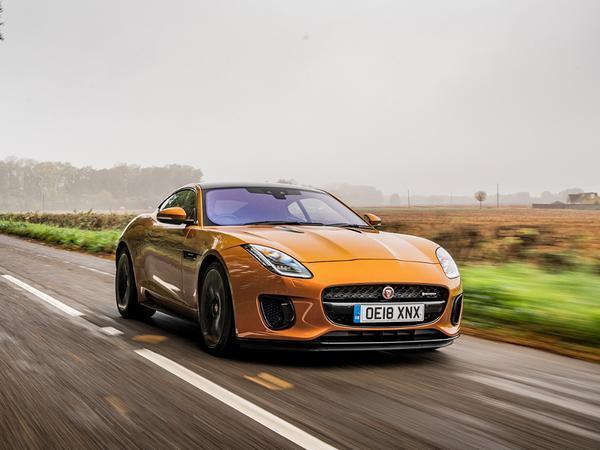 Were you aware of the Model Year 2019 updates to the Jaguar F-Type? Chances are probably not, unless you’re a frequenter of the F-Type forums. It’s hardly a radical overhaul – those expecting a stripped-out, rear-drive V6 must continue to wait – instead a modest refresh to keep it in the minds of buyers eyeing up a £50k (or more) sports car. With renewed competition from Germany, France and, er, Germany, plus the looming threat of a new Toyota Supra, the Jag will need to be on top form to stave off its adversaries.

Fundamentally it’s still the same car, with the range now re-profiled in line with current Land Rover nomenclature: 2.0-litre four-cylinder is now P300 (for horsepower), and the V6 models P340 and P380. (The V8 R and SVR continued unchanged, even if P550 does sound quite cool.) The 340hp V6 now gets the four-cylinder’s Torque Vectoring by Braking tech, the 380hp version has adaptive dampers as standard (and keeps its conventional locking diff, fear not), while all variants receive Jaguar’s latest 10-inch InControl Touch Pro infotainment screen. Finally, there are 18 new paint options available, including the very fetching Madagascar Orange seen here – £3,500 for metallic, or £6k (!) for a matt finish… 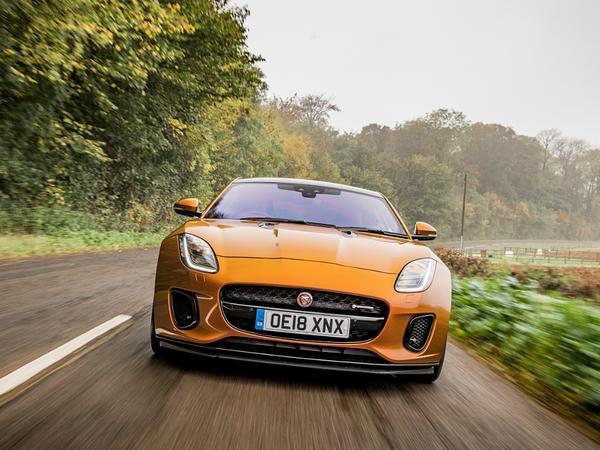 Embellishment rather than enhancement you might reasonably argue, then, and that bears out in our first few miles in a V6 S Roadster. There’s no hiding the fact the F remains a large, heavy car, an impression exacerbated by its awkward visibility. So attempting to thread it down sinewy B-roads is an exercise in restraint, burly dimensions as inhibiting to your pace as the occasional structural wobble – best evidenced by the new frameless rear mirror giving a hazy reflection.

Still that’s never been the F-Type’s forte, so criticism seems a little churlish; much better to explore its talents on a larger, wider road, where the Jaguar charm offensive remains as effective as it’s been over the past half a decade. The supercharged V6 has good response, more than enough performance and that rich, soundtrack. The ZF auto is a perfect match and you’re ensconced as a driver in a lavish, evocative interior, one that still feels special after all this time. There’s a sense of theatre, occasion and luxury that still hasn’t quite been matched. And, let’s face it, in the fairly ordinary journeys most of us must undertake in a car, that counts for quite a lot. 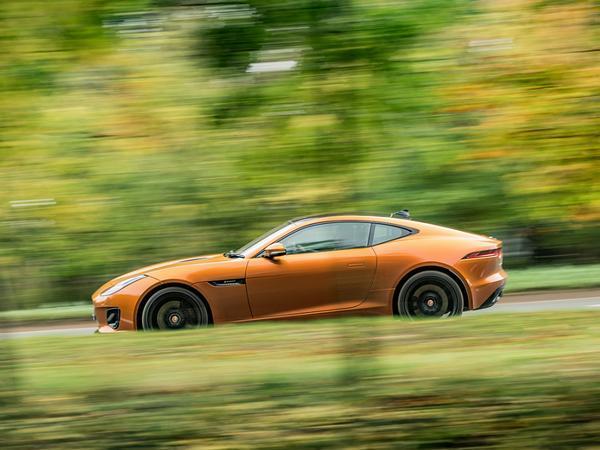 As a GT-cum-sports-car there’s still plenty to like, also – the damping is largely assured (if a little abrupt in Dynamic mode), the steering lucid and nicely weighted, the balance spot on and easy to manipulate. There’s nothing revolutionary about the F-Type’s dynamics, and there never has been, but that’s part of the appeal: noisy engine up front and power out back, with an excitable lump of flesh in the middle, is a time-honoured recipe for entertainment. You’ll chortle, giggle and snigger more in 20 minutes with an F-Type than 20 days with a Boxster, even if the Porsche is technically – no surprises here – the better car. You pays your money…

To a large extent that sentiment stands true for the four-cylinder car, also. What’s lost in snarly six-cylinder sonics is gained in lighter, keener, more enthusiastic dynamics. The F-Type feels unshackled from the burden of the larger engine, swifter to change direction and more assertive in control of its body movements. Truth be told it’s simply a really nice sports car, with performance exploitable in the UK (and so not as overwhelming as some of the faster models) and a sense of occasion still intact despite half the cylinders of the V8 flagship – little surprise the P300 models now account of 42 per cent of all F-Type sales on their own. 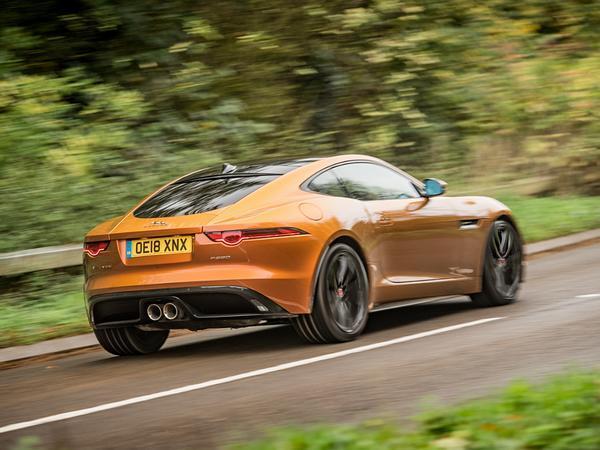 Finally, there’s a V6 S P380 Coupe to drive, which may still be the pick of the range four years after its introduction. Because now that sound is accompanied by the additional precision of a hard-top body, even if that front end remains less immediate and a tad more ponderous than the P300. It feels both exciting and accommodating, equally capable (and enjoyable) on a more spirited drive as it is at a less frenetic pace. Easier to navigate the fancy new touchscreen then, too…

So while familiar flaws remain with the F-Type (imagine it at 80 per cent of the size, and weight), some equally familiar and very endearing traits remain too. The theatre associated with the way it looks and the way it sounds remains undimmed, which it will need to trade on more heavily than ever, given rivals like the Alpine A110 and BMW M2 Competition now join the Porsche 718 twins in being more resolved driver’s cars for various reasons. That said, despite the obvious parallels sought for comparison in their respective prices and remits, the Jag continues to offer something discrete and different in this sector. And, it must be said, likeable too. Yet even with the considerable subjective appeal, there’s no escaping the fact it could do with a more comprehensive overhaul than this to really challenge the very best sports cars out there – we’ll await it with interest. 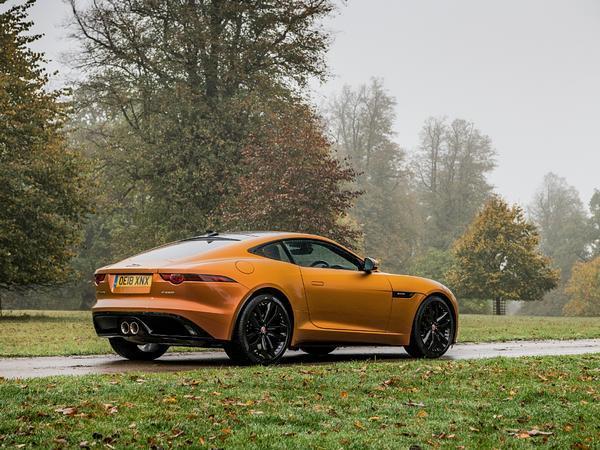 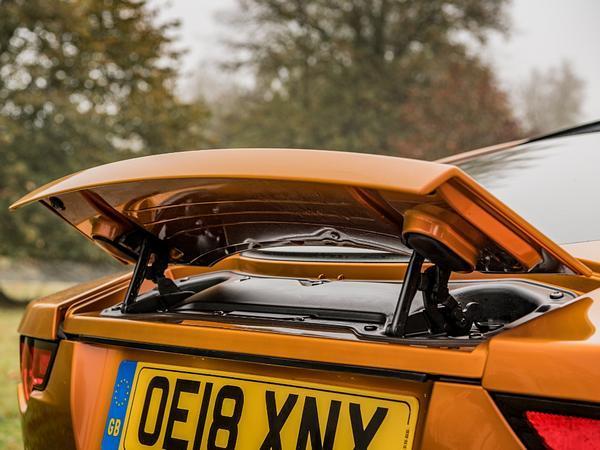 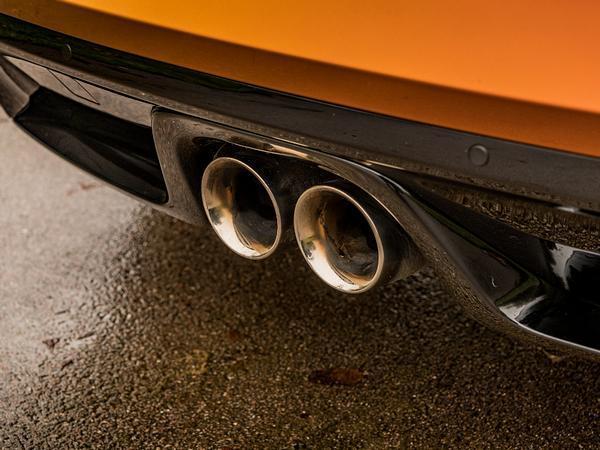 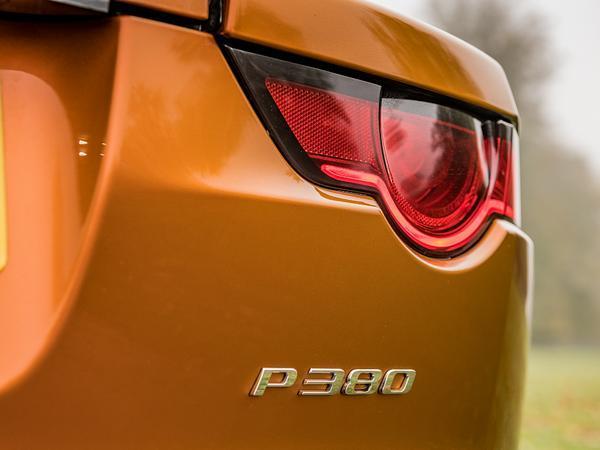