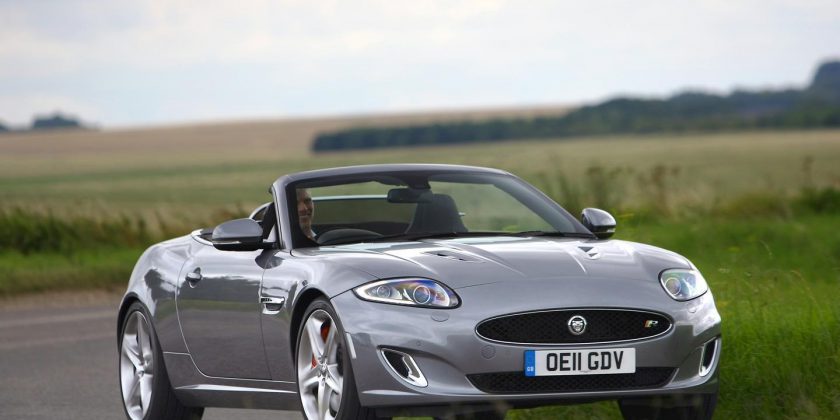 The second generation of Jaguar XK was first introduced as the Advanced Lightweight Coupe (ALC) at the Detroit Motor Show in 2005. It was the first Jaguar to be completely styled by Ian Callum and the ALC was, to all intents and purposes, the same production-ready car officially announced at the Frankfurt Motor Show later that same year.

On sale in 2006, the XK (X150) Coupe and Convertible followed the X350 XJ in the use of an aluminium bonded and riveted monocoque with aluminium body panels. There are only two welds in the entire car, one either side of the roof. This made the X150 90kg lighter than the previous steel-bodied X100 and stiffer, too, with the second generation coupe and convertible said to be 50 per cent and 31 per cent more rigid than their predecessors respectively.

At launch, Jaguar retained the 300hp 4.2-litre V8 from the previous car in naturally-aspirated form. The XKR arrived shortly afterward with a supercharged variant of that engine, though there was also a new fuel injection system to help with emissions, plus variable valve timing and a twin air-intake system. Both cars used a six-speed automatic gearbox. The 300hp XK covered 0-62mph in 5.9 seconds while the 420hp XKR needed only 4.9 seconds. For 2008, Jaguar introduced the XKR-S as a limited run of 200 cars. Top speed was raised from a limited 155mph to 174mph, the aerodynamics were improved and larger Alcon brake discs were also added.

Various special edition XKs followed, including the 530hp XKR 75, but the icing on the XK cake was the R-S that came with a 550hp supercharged V8. This model gave rise to the XKR-S GT, which was 40kg lighter and sported brakes from the F-type. The GT offered 0-62mph in 3.9 seconds to be the quickest and most extreme XK, before production came to an end in mid-2014.

Note for reference: car weight and power data are hard to pin down with absolute certainty. For consistency, we use the same source for all our guides. We hope the data we use is right more often than it's wrong. Our advice is to treat it as relative rather than definitive.

The X150 XK started life with an all-aluminium 4,196cc AJ-V8 for both coupe and convertible. It is mated to a six-speed ZF 6HP26 automatic gearbox that was used throughout the XK's lifetime. In mid-2006, the XKR arrived with an Eaton MP112 Roots-type supercharger.

Both variations on the Jaguar V8 engine addressed the issues experienced in the previous XK generation of weak timing chain tensioners and water pumps. This engine uses chains to drive four camshafts and should be trouble-free if the 10,000-mile service intervals have been observed. Oil changes must use the correct 5W 30 semi or fully synthetic oil for the 4.2 units and 5W 20 oil for the 5.0-litre motors. Specialists say the supercharged V8 can begin to rattle at 50,000 miles if its oil services have been neglected or the wrong oil used.

For 2009, Jaguar introduced the 5,000cc V8 in standard and supercharged variants with 385 and 510hp respectively. As with the 4.2 V8, the thermostat can fail and lead to overheating. Another cause of overheating is the radiator becoming clogged with leaves, which can also cause corrosion of the pipework.

Listen out for the cooling fan kicking in when it should. Electric problems mean some cars run with the cooling fan on permanently. This can lead to the dash warning light coming on, which is an MOT failure. Another noise to keep an ear out for is a rattle from the XKR's variable valve timing. This is usually due to the hydraulics and requires a new unit. Jaguar said the automatic gearbox was maintenance-free, but specialists recommend changing the oil at 60,000 miles. The filter in the gearbox sump should also be replaced. If the 'box has a leak, it's most likely the connector sleeve.

All X150 XKs have a double wishbone with coilover spring, anti-roll bar and damper set-up at the front and rear. Jaguar offered its (CATS) Computer Active Technology Suspension as an option when the XK was first launched but soon made it standard across the board. The CATS system offers the driver a choice of suspension settings to suit comfort or sporting moods. An easy way to check if an XK has this suspension is to look for a wire coming out of the suspension tops under the bonnet. No wire means no CATS.

The electronic components inside the dampers tend to wear out by 60,000 miles. A new damper is around £350 plus a couple of hours of labour to fit. At the same sort of mileage, you can also reckon on replacing each of the lower wishbones and all of the suspension bushes to keep the XK handling and riding as it should. Look for uneven tyre wear, vague steering or any shuddering when braking.

Rack and pinion steering is used on all X150 models with hydraulic assistance. It's proven to be very durable, so the only thing to check is for damaged alloy wheels and especially the larger 20-inch rims that are more susceptible to warping from pothole impacts. Tyres are commonly mentioned by owners as an expensive part of ownership, with franchise dealers charging a predictable premium for the pleasure of having them changed on site.

Braking is by vented discs all-round, with 326mm front and rear discs for the XK models, while the XKR benefits from larger 355mm front discs. The XKR-S gained 400mm fronts and 350mm rear discs to cope with slowing from its raised top speed of 174mph.

An electronic handbrake saves space in the cabin but it can fail as the car reaches five years old. It's a simple enough fix for a Jaguar dealer or independent garage, but DIY work is inadvisable as the service mode has to be engaged using the car's diagnostic port to prevent the handbrake's calipers potentially closing and trapping your fingers as you remove the pads.

The only other drivetrain worry is the E-diff used on early XKR models, which can cause a vibration when cornering and accelerating. Jaguar should have cured these problems under warranty.

Using aluminium for the XK's construction means there are no worries about rust that can plague less well cared for earlier generation XKs. However, it's still worth checking around all of the trim and exterior plastics as they can rub off the paint and let bubbling begin underneath. A few owners have also reported corrosion where the rear wing meets the door opening.

Bigger concerns with aluminium bodywork are dents and poorly repaired damage. Fixing aluminium bodywork requires a skilled specialist and exacting painting to avoid blistering and peeling. You might also find corrosion where steel fittings are used to hold the front bumper, wheelarch liners and undertray.

The XK has a Pedestrian Safety System bonnet that raises the bonnet by a few inches when it detects a collision to better cushion a pedestrian from the car's hard points. USA-bound XKs did not have this. There have been some incidents where the bonnet had deployed without a collision due to a bad electrical earth. This can be a costly fault as the aluminium bonnet may need to be replaced as the force of the deployment can rip the pins out of the metal and destroy the hinges. A more likely fault is a broken pedestrian sensor.

A telescopic rear aerial mount is on the right rear wing of early cars. It could be removed using a kit from Jaguar that cost from £350, plus a further £100 for the wiring. Add in the five hours of labour Jaguar charged to do this and few owners bothered. Jaguar then replaced this unsightly aerial mount with an antenna in the rear boot spoiler for the 2008 model year.

The XK started off with 'Sports' seats and the XK R with 'R Sports' seats, both with 10-way electric adjustment. This is enough for many, but there was the option of 16-way adjustment that includes side bolsters that inflate to give more lateral support.

From 2008, Jaguar improved the look and feel of the XK's cabin with chrome for the column stalks and tungsten finish to the centre console buttons in place of black plastic. The 2008 Portfolio model introduced more luxury to the XK, including a Bowers and Wilkins stereo. However, the satellite navigation fitted to the XK was already somewhat outdated.

Even so, the XK's interior proved to be hard wearing and the Jaguar Drive Selector that replaced the standard gear lever in 2009 adds a touch of drama to the start-up procedure. All X150s have keyless ignition, while keyless entry was a £430 option.

The air conditioning's drain tube gets blocked up and lets condensed water run into the footwell, so check carpets for staining or damp. The official fix is to remove the dash and replace the pipe, but a cheaper solution is to lower the gearbox and trim the blocked end off the pipe, which can be done at an independent specialist.

The coupe is more practical thanks to 300-litre boot space compared to the cabriolet's 200 litres when the roof is folded down, although neither offers much rear seat space. The coupe has a hatchback tailgate for easy access to the luggage compartment. For the cabriolet, aftermarket wind deflectors can reduce wind buffeting while being a whole lot cheaper than the original option from Jaguar. The drop-top's roof is well insulated and has also proved very durable.

The XK went out of production in 2014, and yet still looks the part in the subsequent decade. It helps that its indirect replacement, the F-Type, had a slightly different brief – meaning the XK hasn’t had a like-for-like successor to show it up. Anyone looking for a long-nosed Jaguar – particularly one furnished with a V8 – can still rely on the XK. And for not much money either.

That's partly to do with the amount of choice available, although it's an eye-opener in 2021 that a very modest amount of money indeed buys you a X150 XK with 4.2-litres of eight-cylinder goodness. Sure, the orange indicators and bland dash design of these pre-2009 cars means the facelifted model looks much fresher. But no matter which side of the XK update you choose, you can rest assured that a proper Jaguar is in the offing. Especially if you can stretch to an XKR.

Obviously this means attuning yourself to the realities of a supercharged V8, which include late-teens real world economy and more regular routine servicing, but the higher-powered sporting variants arguably offer the best value to the secondhand buyer. From around £15k you can access early 4.2 XKRs, while £20k buys you the later 5.0-litre machine with its 510hp output. That’s Fiesta ST-1 money for a supercar-fast posh Jag. Of course, such cars bring their own risks, yet owners frequently report how tough these old bruisers are, both mechanically and in their all-round fit and finish.

For those unobstructed by a mediocre bank balance, the XKR-S section of PH (which at the time of writing has three contenders) is worth checking out. But in truth, you don't need to stray beyond the limits of the standard XK if you're just looking for a good time; the lazier attitude of the base model arguably gives it more charm, and swerves round the idea that the car was never the sharpest tool in the box anyway. Suffice it to say, no matter what your budget, there’s a model to suit everyone – and dare we say it, prices can’t get much lower…