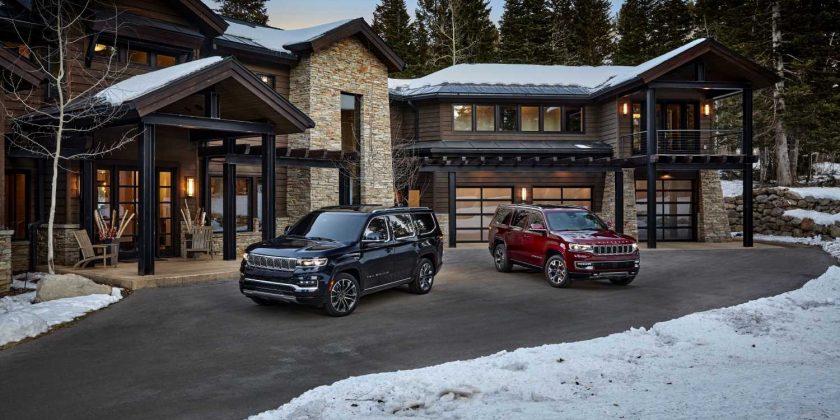 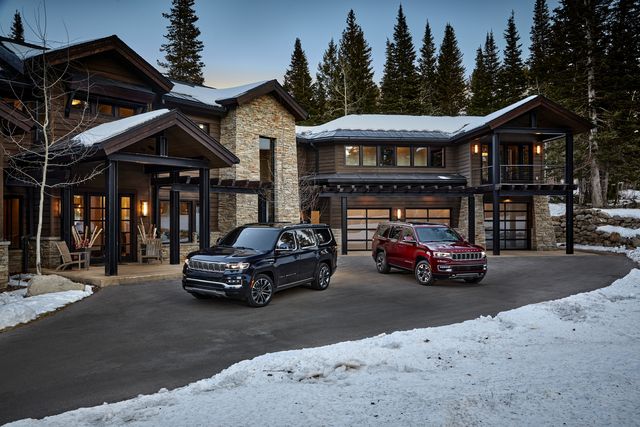 We saw the concept back in September, and now Jeep has unveiled its 2022 Grand Wagoneer in production trim, and is showing off the ’22 Wagoneer as well. Jeep officials said there will be three 4×4 systems available, that the trucks will have best-in-class towing up to 10,000 lbs., and that Wagoneer/Grand Wagoneer will eventually become “a portfolio of vehicles.”

Jeep figures it has both the mainstream SUV market and the off-road market covered, but the company thinks the Wagoneer gives it a foot in the door of the large SUV segment while Grand Wagoneer dukes it out in the premium segment. So think Tahoe, Expedition, and Yukon as competition for the Wagoneer and Navigator, Range Rover, and Escalade for the Grand Wagoneer. Wagoneer Certified Dealers will sell the trucks, and the showrooms new-car delivery areas will have dedicated Wagoneer display areas. Dealers who earn a J.D. Power “Customer First” award for excellence are the ones who earned the chance to sell the Wagoneers. The dealers also have agreed to offer a remote showroom, test drives, and delivery for sales and vehicle pickup/delivery for service, as well as 24/7 customer support and five years of worry-free maintenance. 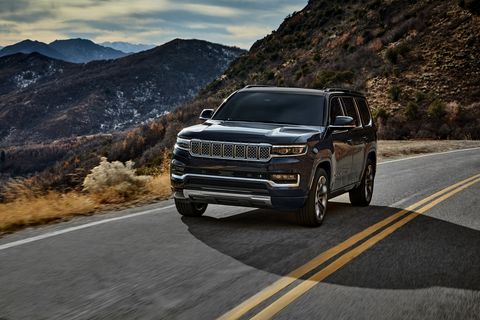 Under the Wagoneer’s hood is the 5.7-liter V8 producing 392 hp and 404 lb-ft of torque. The Wagoneer is the first vehicle with the next-generation eTorque hybrid system. It replaces the alternator with a belt-driven motor generator, and the motor generator works with a 48-volt battery pack for seamless start/stop, a torque boost under hard acceleration (up to 130 lb-ft), and brake regen.

The Grand Wagoneer has a 6.4-liter V8 delivering 471 hp and 455 lb-ft of torque. Both engines are mated to an eight-speed automatic transmission. 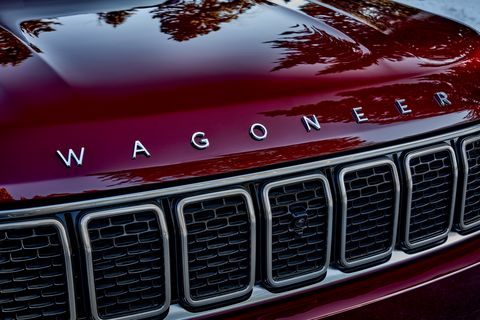 Jeep says its two new trucks have styling inspired by the original SUV and are a modern interpretation of the design that debuted in the ’60s and lasted largely unchanged until 1991. Yes, the seven-slot grille hints at the rest of the Jeep family and, on the Grand Wagoneer, it features paint-over-chrome laser-etched grille rings, “similar to a knurled finish seen on fine watches,” says Jeep. The Wagoneer comes in Series I, Series II, and Series III trims, with the Grand Wagoneer following the same lineup with the addition of an Obsidian trim. Series III models feature raised aluminum badging. The Grand Wagoneer’s Obsidian trim, coming this summer, includes 22-inch black wheels, a black oynx grille and badging, gloss black exterior mirrors, body-color wheel and door flares, dark onyx metal instrument panel trim, global black instrument panel and doors, piano black appliqués and a 1,375-watt (!!) McIntosh sound system.

Differences between the Wagoneer and Grand Wagoneer include LED headlamps, fog lamps, accent badging, and a standard side step on the Wagoneer, while the Grand Wagoneer has a two-tone black roof and its own hood, front-end, grille, unique premium LED lighting, fender flares, and power retractable side-steps, all standard. Both models get front tow hooks when you order the Heavy Duty Trailer Tow package. If you order your Wagoneer with the Advance All-Terrain Group of equipment, you get four steel skid plates, one each on the front axle, transfer case, fuel tank, and rear stabilizer bushing. Wagoneer comes standard on 20-inch wheels with a 22-inch painted and polished wheel optional. The Grand Wagoneer come standard on 20- or 22-inch aluminum wheels featuring four different finishes and textures. 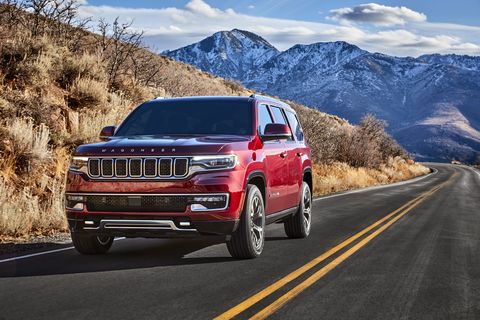 Jeep officials say they really sweated the details on the two trucks’ interiors, and while we haven’t seen them in person we must say they look good in photos in terms of build quality and materials.

Inside the new Grand Wagoneer you find handcrafted Satin American Walnut wood, chosen, Jeep says, for both elegance and durability, as well as plenty of aluminum trim. The Wagoneer has a one-piece instrument panel while Grand Wagoneer has a two-piece design with an optional piano black mid-bolster integrating connectivity. The center console houses the aluminum shift knob, featuring an ambient glow, of course. Jeep says it is even proud of the start button, surrounded with a knurl-patterned bezel and, on Grand Wagoneers, wrapped in leather with a French accent stitch. There’s also an optional (and class-exclusive, says Jeep) touchpad-controlled safe underneath the front armrest. 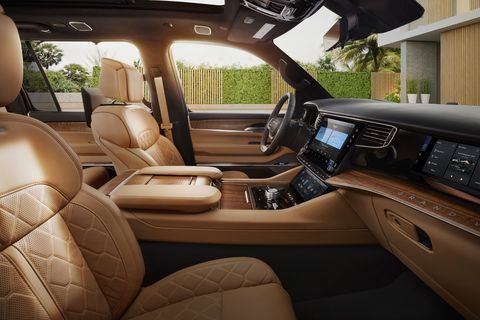 Jeep offers five customizable ambient lighting themes as well as the new Uconnect 5 system. You can get a digital rearview mirror, a rear-seat monitoring camera, and head-up display. Jeep says Uconnect 5, with either a 10.1- or 12-inch digital display, is five times faster compared to the previous generation. It uses an Android operating system and over-the-air updates. An optional 10.25-inch passenger screen has co-pilot navigation, entertainment, and the ability to view the exterior vehicle cameras and Amazon Fire TV. Tick all the option boxes and you can get up to 75-inches of digital display screen in the Grand Wagoneer and 50-inches in the Wagoneer.

Will you line up for a new Jeep? Sign up for comments and let us know.