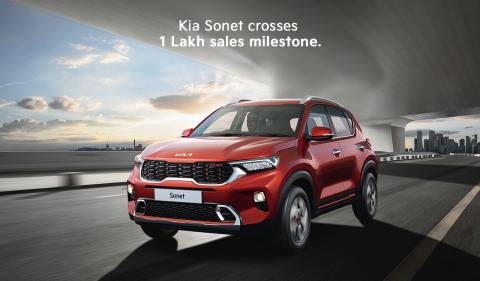 The Sonet 1.5-litre diesel AT contributed to 10% of overall sales. 26% of customers chose the clutchless Intelligent Manual Transmission (iMT).

Kia has announced that it has sold over 1 lakh units of the Sonet in less than 12 months of its launch in India.

The Kia Sonet was launched in September 2020. According to the company, the model contributes almost 17% to the segment and 32% to Kia’s overall sales. The Sonet has also become the fourth best-selling model in its segment.

The petrol engines are available with either a 5-speed manual, 6-speed iMT or a 7-speed DCT, while the diesel engine gets 6-speed manual and 6-speed automatic transmission options.

According to Kia, the 1.5-litre diesel AT contributed to 10% of overall sales. 64% of the overall dispatches were of the top variants. Also, 30% of customers opted for the variants with connected car features, while 26% chose the clutchless Intelligent Manual Transmission (iMT).