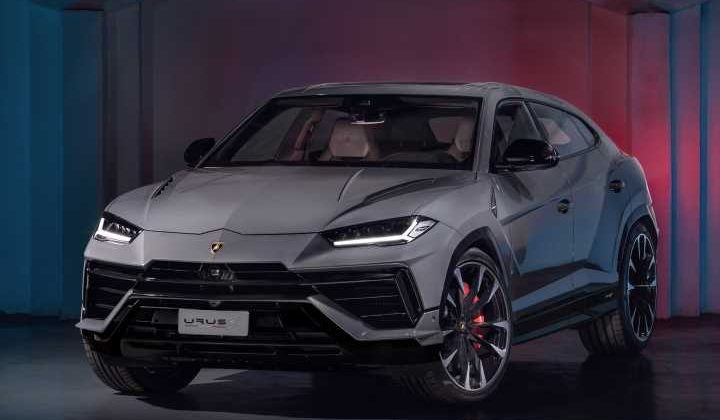 Performante too hardcore? Try 666hp with 'luxurious versatility and presence'

Though it would be a very old-school Lamborghini move to now only offer its SUV in Pikes Peak record-breaking Performante guise, there would be a risk of alienating those Urus customers won over by the standard car’s more rounded approach. And that’s not a group to be distant from, given there are more than 20,000 of them out there. Twenty thousand! Hence the new Urus S, taking the place of that first car as a less overt, more subdued kind of Lamborghini SUV (all things being relative) and making it a two-model range for the first time.

Still gets 666hp, though, so that’s good, just 4hp less than the almighty Murcielago SV and more than any factory Huracan ever. That improves performance for the S against the old Urus, with 62mph now turning up in only 3.5 seconds and top speed at 190mph. A lot of the key stats mirror the Performante, in fact, with the same 627lb ft at 2,300-6,000rpm from the 4.0-litre twin-turbo V8. The now-homologated CO2 and MPG figures (they weren’t available for the Performante prototype drive) of 320g/km 20mpg surely won’t be far apart, either. Likely of greater importance to prospective buyers will be a retuned exhaust (and new look pipes) ‘with a more distinct sound at start-up and a sharper note in each drive mode’.

Speaking of which, the same half dozen remain for this S as were there for the Urus: Strada Sport and Corsa for on road, then Terra, Neve and Sabbia for off it. Should you dare to risk wheels that can be anything up to 23-inch in diameter. Apparently Ego isn’t a drive setting – ‘six drive modes plus Ego mode’, says Lamborghini – but the options offered up by all six (or seven) of them mean the Urus S will be ‘the most versatile, comfortable and sporty Super SUV experience in every environment’.

Now we’re getting to the nub of what the S is trying to achieve, marrying the additional power of the Performante with a more relaxed remit. It’s hinted at with a new look, with a fresh design for the bumpers and grilles as well as a vented bonnet. The Urus is still some way from discreet, put it that way. Lamborghini is promising a whole host more options for the S, too, allowing ‘customisation across the spectrum, from understated style to maximum sportiness.’ Gotta give the paying people what they want, after all.

The S overhaul is similar inside; still recognisably an Urus, but now with even more scope for personal upgrades. There are two themes for two-tone leather now, with colours including Blu Leandro and Verde Aura. It may not be a Performante, but there will be every opportunity for Urus S customers to make their car stand out.

There will be a useful saving over the Performante to spend on options, too. The Urus S is set to cost £188,000 in the UK where the range-topper commands a £20k premium. Goes to show how in demand the big  Lamborghini is, in fact (or how many options are typically added on, or how mad used cars are) that £190k remains the entry point for Urus ownership – even for a three-year-old car with almost 50,000 miles. Best get a new order in now, then…