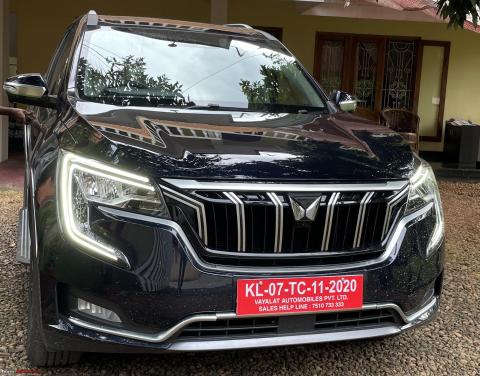 I had initially booked the Kia Seltos but cancelled it at the last minute.

BHPian NotanF1driver recently shared this with other enthusiasts.

I have been looking out to upgrade my car since 2019. Two years and many lockdowns later, the search still continues. My options are listed below:

Kia Seltos Diesel AT – The obvious first thing which comes to anyone’s mind are the Seltos/ Creta twins. I can’t stand by the looks of the Creta and hence went with the Seltos. I even gave 25k and booked one, since the sales representative mentioned that the waiting period is 7 months for the GTX+ variant. My take was that the XUV700 would be too expensive, considering the XUV500’s price point. And then everything went down the drain with the announcement of the XUV700. I cancelled my booking and waited for the official launch of the 700.

Mahindra XUV700 AX7L Diesel AT – Went ahead and booked one, considering the huge demand. I took a test drive of the car recently – the AT as well as the MT diesel. Took the MT diesel for a spin first and found that the engine was a bit crude and noise filtered into the cabin more than I liked. I felt it to be unimpressive in terms of overall drivability.

I insisted on an AT and it came home for a test drive. The NVH was better in the AT, somehow (maybe due to less interaction with the mechanicals – like clutch, gear lever etc.). The first thing which I noticed is the gearbox tuning – I felt it to be tuned to be matched with a smaller engine. The AT gearbox kept the engine on the boil more than what is required (personal opinion). I don’t drive pedal to the metal – only part throttle. When that’s the driving style, on-road performance is only just about adequate. Noise insulation was also not great, and there were noticeable vibrations on the steering wheel at higher revs. In inclines too, the gearbox opted for a lower gear than what is actually required by the engine, which was not to my liking. One other point is that the gearbox fails to keep the engine at its best powerband in the part throttle. I felt that the 450 NM of torque was lost somewhere and in-gear acceleration was not impressive.

The dilemma – I came back home and started thinking about other cars I had driven. In my mind, I recollected the Harrier test drive I had taken some 10 months ago – It was better than the XUV700 and it got me thinking.

Tata Safari XZA+ – I could not resist, but take a test drive of the Safari the very next day. Step inside the cabin, and I felt it to be a tad bit more welcoming and luxurious than the 700. It looked old school, rather than tech-heavy. During the drive, my thoughts were found to be right. The acceleration was very good. The engine and gearbox were well-tuned which meant that the engine was in its sweet spot 80% of the time. NVH was miles ahead of the 700 – I felt that the damping is better in the Safari. Even though down by 100 Nm in terms of torque, it felt faster than the 700 and was more usable. Ride and handling was neck and neck with XUV with the Safari being a bit more silent in potholes.

Where XUV700 and Safari are neck and neck:

Where the Safari is better:

I am now inclining towards spending a lot of money on a flagship Tata product. I really want to buy the 700, being a newer and tech-heavy car (niggles aside ) I expect more issues in 700 than Safari, since it has been almost a year since the launch of the Safari.

Has anyone here driven both the 700 and Safari? Did you feel the same or is there a different viewpoint?

Hope the ownership experience won’t be a hassle with the Tata service centres. Here’s what BHPian quantobigboot had to say on the matter:

Now, it all boils down to the price. This is where the XUV700 has the upper hand, the petrol option helps it further. Due to the 10 year rule in Delhi NCR, we are looking at the petrol version and that is coming out to be a lot cheaper upfront + gives 5 years extra lifetime over diesel. If there are no budget constraints and you’re fine with a diesel, Safari feels to be a more solid choice and is a proper 7-seater, given you can compromise on a bit of tech.

Here’s what BHPian neoonwheels had to say on the matter:

I have driven Harrier AT on the highway and it feels pretty planted even at triple-digit speeds. I am sure Safari is no different. XUV AT even though I could not drive on the highway, I felt it masks its size very well for city driving. In Harrier, you feel you are driving a big car while XUV just wraps you.

However, the biggest downers for me in Harrier-Safari are:

Apart from these 2 issues, I find both cars quite good for what they offer.

Here’s what BHPian grimmreaper_gtr had to say on the matter:

Very well expressed. We did the same test and came to the same conclusion. Safari is far better to drive. We were already planning to buy the Safari as we weren’t really sold on the XUV’s looks, but driving it just removed any confusion that existed. Now the question is, when will the 2022 update Safari be launched? The current offering still feels a little bit unfinished, especially when you talk about the infotainment system. An AWD wouldn’t hurt either!