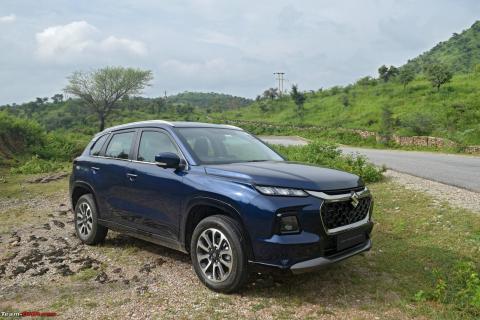 The Grand Vitara will be sold alongside the Toyota Urban Cruiser Hyryder.

Maruti Suzuki will launch the new Grand Vitara in India on September 26, 2022. It will be sold alongside the Toyota Urban Cruiser Hyryder. Bookings for the SUV have already commenced.

The strong-hybrid version of the Grand Vitara uses a 1.5-litre petrol engine producing 115 BHP and 122 Nm and an electric motor with an output of 78 BHP and 141 Nm. This powertrain comes with a continuously variable transmission (CVT).

The Grand Vitara is also offered with a more familiar 1.5-litre mild-hybrid powertrain. It makes 103 BHP and 137 Nm and is available with either a 5-speed manual or a 6-speed automatic transmission. The mild-hybrid version also gets an optional all-wheel drive.