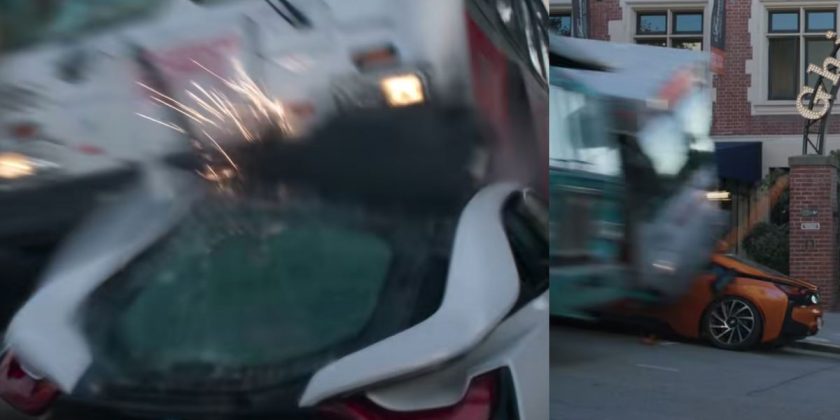 Having been delayed by the Coronavirus pandemic, Marvel’s Phase Four of superhero films is back with an Avengence (sorry) later this year. Black Widow will come first in July, followed by Shang-Chi and the Legend of the Ten Rings in September. One thing seemingly links the two – BMW product placement.

The latest Black Widow trailer came out a few weeks back, prominently featuring a BMW X3 M40i. More recently, Marvel released the first proper trailer for Shang-Chi, which as pointed out by Car Scoops, has something of an appetite for BMW destruction.

Not one but two i8s are squashed by a bus driven by Katy, portrayed by Awkwafina, plus a Porsche 924 and a Honda CR-X del Sol. It has us in mind of that bit from The World Is Not Enough where James Bond’s Z8 (thankfully a mock-up made by the prop department) got hacked in half by a giant chainsaw dangling from a helicopter.

Earlier on in the Shang Chi trailer, we can also see a very glossy shot of an M8, with the latest 7-series parked in the background. We’ve managed to at least find out that BMW supplied cars for the two films, but little else about the company’s arrangement with Disney.

It’s possible this is the start of a long-running arrangement between BMW and Marvel/Disney, like the one that saw various Audi models crop up in the Marvel Cinematic Universe over the years, often quite awkwardly. It’d make sense for the MCU to pivot away from Audi – Tony Stark’s on-screen penchant for the brand’s cars was a key reason for their appearances, and that character is (SPOILER ALERT!) no longer around. We suspect some PR noise will be made closer to the release of these two films.

Want to see the grizzly i8 death playing out on a big screen? Shang-Chi and the Legend of the Ten Rings is out on 3 September.