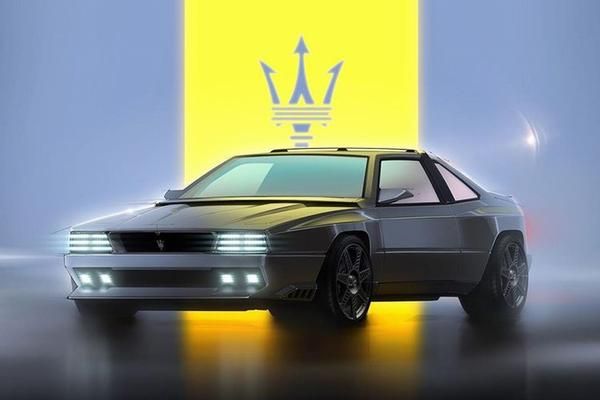 Even the most dedicated of Maserati fans will concede that there have been some tumultuous periods in the storied history of the Trident. Along with some iffy cars, too. But there are also those Masers unfairly forgotten, the rare and interesting sports cars pre-3200GT that never get much attention. With Project Rekall, Maserati is hoping to change all that.

Rekall is Maserati's take on the Shamal, the twin-turbo V8 sports car from the 1990s. This was a long time before diesel SUVs and hybrid saloons, of course; Maserati didn't have much money, there was a lot of BiTurbo influence, and just 369 were made. As the sports car flagship of the pre-Ferrari, era, though, the Shamal has a special place in Maserati history. With this Rekall restomod, Maserati want to celebrate that.

Details are vague at the moment; it's been revealed only on Maserati's 'Fuoriserie' Instagram account, suggesting merely that the 21st century Shamal will feature "sharp edges, box fenders, up-to-date technology and sci-fi taste." And frankly if that's good enough for the Delta Integrale reimagination, then it's good enough for a Shamal…

Interestingly, Maserati is keen for the great social media massive to be involved with the project; to "join the resistance, help us make the hard choices together we'll see it through to the end." Which sounds like a plan for Boaty McBoatface on four wheels, but let's see. Point is there's no guarantee even that an original Shamal will be used – Maserati is saying "we would never touch one of the originals" and that it's "still evaluating" the best platform and engine – so it really isn't much more than sketches and box arches for the moment. Which is enough to be excited by, if not cause for nationwide jubilation just yet. But there is a clutch pedal and a gearlever, notably.

With a back catalogue like Maserati's, celebrating the past does seem like a logical strategy for increasing brand awareness and appeal – especially when you have a new model like the MC20 to shout about. More broadly, heritage is going to play an increasingly significant role for manufacturers as an EV future looms large and, whatever you want to say about Maserati, it boasts a history like no other. If reviving that in the 2020s means more projects like Rekall, and greater recognition for cars from the Shamal's era, then we're all for it. Let's see what where it goes…