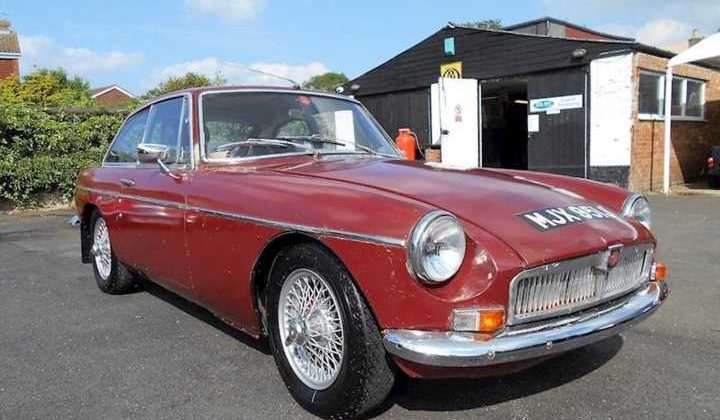 Rabbie Burns almost certainly wasn’t thinking of high-risk sports car purchases when he penned his famous line about the best laid schemes gannin’ aft a-gley, not least because he was writing a century before Karl Benz had his three-wheeled brainwave. But that’s pretty much what happened this week in the PH command bunker. Deputy Editor Bird’s finger was poised above the big, green button that would have commissioned me to write about an enticingly priced Ferrari 575 Maranello, when news broke that there was a £2,950 MGB in the murkier depths of the classifieds. Scuzzier tastes prevailed, which is why you’re getting rags rather than riches this week.

A classic car dealer once joked that the first thing that would happen after a nuclear apocalypse is that the cockroaches would start selling MGBs to each other. Plot a graph for the survival rates and the line is more like a topographical survey of Table Mountain than a bell curve. How Many Left reckons there are still nearly 24,000 in use and 14,000 on SORN – a higher combined total than the Porsche Boxster, despite the last B being built 41 years ago. They are pretty much unkillable, thanks to parts support comprehensive enough to allow functionally new examples to be built and an enthusiastic, hands-on following who often regard holes in the floorpan as minor flesh wounds.

The sheer ubiquity of the MGB makes it slightly unlikely that Brave Pill hasn’t featured one before. There are actually three sub-£3,000 examples currently it the classifieds, but this one stands out for a couple of good reasons. Firstly, being a 1970 car, it is early enough to come with period-correct chrome and wire wheels in place of the rubber bumpers which made later cars look gawky and inelegant, and also legitimately wears silver on black numberplates. Also because although obviously in need of serious work, it looks like it might ultimately be turned into more than the sum of its faded parts.

It’s not hard to be sniffy about MGBs. I used to be one of the sniffiest. In the relatively recent past most cars got old without becoming classics, with the few exceptions mostly elderly sports cars. Some of these were genuine, unarguable Grand Cru classics like Mercedes 300 SLs, Jaguar E-Type roadsters and the rarer Ferraris and Aston Martins that have always been catnip for millionaires. But in Blighty most were the cheaper, plentiful British models from the ’60s and ’70s: big Healeys, Sprites, Midgets, Triumph TRs and – above all – MGBs.

The B had been moderately advanced when it was introduced in 1963, featuring a monocoque structure instead of the MGA’s separate chassis and being the first car designed with crumple zones. It could cruise at nearly 100mph on what were still limit-free motorways, and dispatch the 0-60 benchmark in what was a potent 12 seconds. But by the time the last rubber-bumper examples were assembled in Abingdon in 1980 it looked crude and old, the B-series engine never having grown any quicker and with a leaf-sprung rear axle that seemed archaic. Within a decade of the final one being built most survivors seemed to be polished like horse brasses and used almost exclusively to trundle slowly between country pubs.

A cruel stereotype? Yes, but with plenty of casual evidence to support it. When, well inside this century, I first drove an MGB for a classic magazine comparison its owner turned up wearing a cloth cap and string-backed driving gloves. Yet he was also friendly, knowledgeable, and cheerful in the face of the relentless banter from those who had brought more sophisticated rivals along: “I’ve heard most of the jokes about MGs, but I’m always looking for new ones.”

The MGB itself, a chrome-bumper roadster, was also a modest revelation. I’d been expecting dynamic ineptitude, but although the driving experience was far from modern in terms of refinement and grip, the combination of light, accurate steering, a precise gearchange and a torquey engine made for an excellent low-intensity sports car. One that could deliver its modest thrills without even bending speed limits. It was also cheap to buy, run and insure, and every single part was readily available.

Classically minded buyers tender to prefer the B roadster for its hair-rustling ability to make low velocities feel quicker, but the fixed-roof GT offered the alternative of a proto-hatchback bodyshell and 2+2 practicality. A U.S. magazine once nominated it as one of the “most beautiful Pininfarina designs that aren’t Ferraris”, and a tidy early example still looks pretty special now.

This GT isn’t tidy, but nor could it be accused of hiding faults. Our Pill last had an MOT in 2017, which seems to have been an exercise in masochism more than anything else. It flunked the test spectacularly, with no fewer than 12 failures and seven advisories meaning the examiner must have spent as much time logging faults on the computer system as probing rusty holes.

Yet that fail sheet seems to have become the shopping list for work that has subsequently been done on the car. The selling dealer reports a new floorpan, sills, boot floor, quarter panels and rear chassis legs. There are still grizzly looking areas on the A-pillars and on some of the seams, and the advert’s claim that “paintwork is rough or has character” is a masterpiece of understatement, as is the assertion that the visibly pitted chromework is average.

Upsides include evidence of a fair amount of previous care and attention to the mechanical components, included the fitment of an unleaded compatible cylinder head and a stainless exhaust. It has also had a new radiator and petrol tank, plus fresh tyres. It even has the desirable option of a switchable overdrive and even boasts the unusual addition of a tow bar. Possibly added so an earlier owner could give a roguish Terry-Thomas wink when asked if the car was good at pulling.

So yes, it needs plenty of work. But it is also carrying a price that must be very close to its value in pieces as an original chrome bumper car. With parts support running all the way to brand new bodyshells from British Motor Heritage it would certainly be possible to return this one to full glory, at the cost of a significant spend in parts and labour. Its alternative fate is probably as a donor for another project.

If MGBs really are unkillable, who is going to be brave enough to save this one?