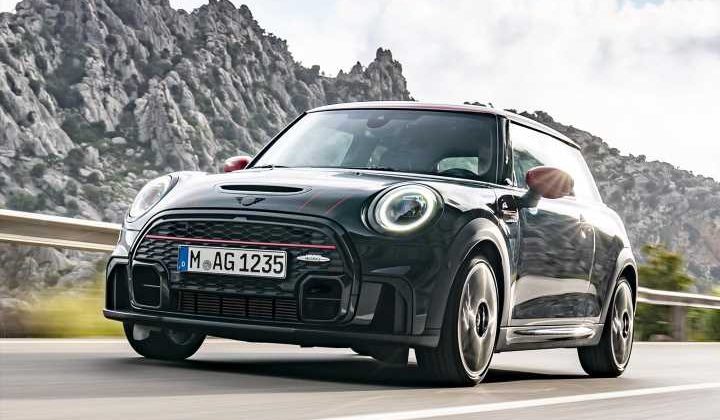 New equipment and a fresh look for Mini's 231hp range-topper

Given how often hot hatches are a subject of discussion, it’s notable that the Mini JCW is seldom talked about. Or so it seems, at least. Here’s a car with more power and torque than a Ford Fiesta ST or a Hyundai i20 N, meaning it has genuine 155mph potential. It’s lighter than the Fiesta, too, at just 1,205kg, which is even more of a surprise given its larger engine. And there’s a standard manual gearbox. Keen to ensure the JCW remains at the front of buyers’ minds, Mini has just updated the flagship hatchback.

Much is cosmetic, as per the recent Convertible revision. Note the Rebel Green paint seen here, offered alongside Chili Red, Island Blue and Rooftop Grey as new choice. There are now also LED lights and a hexagonal radiator grille, plus JCW-specific intakes for brake cooling. The rear is also redesigned, featuring a new diffuser and prominent 85mm exhausts. The wheels seen here are optional 18s in a new ‘John Cooper Works Circuit Spoke’ design. 17s are standard, and all JCWs get brakes developed with Brembo – not just a poseur’s hot hatch, you see.

There’s additional intrigue for the enthusiast in this new car, too, with a rework of the Adaptive Suspension on the extras list. Mini says it operates with more than 10 per cent greater damping force, keeping the wheels in contact with the road “during sporty driving” and with a better balance now between sportiness and ride comfort. Given some questioned the benefit of the optional dampers over the standard set up before – especially given the other decisions to be made on wheels and tyres – it’ll be interesting to see how they perform this time around.

The rest of the mechanical package is unchanged, with 231hp and 236lb ft from the 2.0-litre four-cylinder turbo, plus a choice of six-speed manual or eight-speed automatic transmissions. Mini says the auto needs just 6.1 seconds to hit 62mph, making it almost as quick as the 300hp hot hatches in the segment above. Those chunky exhausts promise an “emotionally powerful” sound.

Finally, the latest refresh has seen the interior tweaked as well. There’s a new 8.8-inch touchscreen as standard, and more options like a heated wheel, lane departure warning and ‘colour worlds’ for the dash displays. JCW or not, this is still a Mini, and customisation remains a big part of its appeal.

With the car only just revealed, there’s isn’t any information on UK spec or pricing just yet. Given the Mini’s continued popularity, however, the new JCW is unlikely to be far away. Still, if you want one now, the classifieds is teeming with them: this manual JCW has a useful saving off list despite just 875 miles. It’s just a few hundred quid more than the i20 N is likely to cost, in fact…