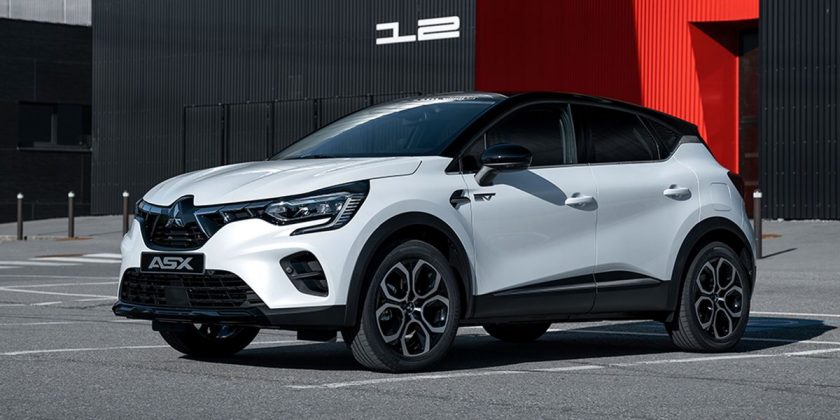 Mitsubishi’s golden era, when it made cars like the 3000GT and the legendary Evos, is a very long time ago now. The brand’s decline is undoubtedly sad – especially for UK buyers as it’s gone for good here. And now, Mitsubishi has resorted to building a badge-engineered Renault just to get a car to market – the latest version of its ASX will merely be a renamed version of the Renault Captur. Are we in some kind of car dystopia?

Don’t get us wrong, the Renault Captur is a pretty good car if you like that sort of thing. It’s won awards from our sister sites Auto Express, Carbuyer and DrivingElectric. And let’s not forget that the old Mitsubishi ASX was a stinking turd. But we’d at least expect Mitsubishi to do something more radical to hide the Captur underneath.

Nope, instead Mitsubishi has literally just stuck on the Mitsubishi logo front and back, a chrome grille at the front, and the word ‘Mitsubishi’ where ‘Captur’ usually sits. Even the wheels are the same as those on the Captur. Inside’s exactly the same too, besides a badge with three diamonds rather than just one.

In Mitsubishi’s official announcement, it states: “the ASX features a flowing silhouette from the front to the rear, and the character line which rises toward the rear combines with the floating roof to give the vehicle a dynamic styling that expresses its agile driving” – this is probably just a cut-and-paste job from the Renault Captur one back in 2019.

Don’t expect the engine choices to be any different, either – the ASX will come with the same Renault Captur-derived engines. For anyone that cares, that’s a 1.0-litre three-pot with 90bhp, a turbocharged 1.3-litre mild-hybrid (with 138bhp and a six-speed manual transmission or 155bhp with a seven-speed dual-clutch transmission), plus hybrid and plug-in hybrid versions. Unfortunately, the crossover won’t be getting the 2.0-litre turbocharged four-cylinder 4G63 engine from various iterations of the Evo…

Badge engineering is often a sad exercise. We felt the same way when Mazda revealed a Yaris in all but name, and when Suzuki started sticking its Superman badge on Toyota something-or-others. There have been a few quirky badge-engineered cars in the past, mind. There was the Kia-badged Lotus Elan, the Saab 9-2X (a rebadged Subaru Impreza WRX), and famously the Aston Martin Cygnet – derived from the Toyota iQ to keep the luxury car brand’s fleet carbon emissions down. Who’d have thought Toyota and Aston Martin would ever share a platform?

The crossover will be sold in Europe in markets where Mitsubishi still operates, such as Germany. Unfortunately, or thankfully – depending on how you look at it – the ASX won’t be reaching the UK.