Chevrolet built 22,229 Corvettes in 1964—8,304 coupes and 13,925 roadsters. Even after accounting for over a half a century’s worth of losses to collision, theft, and attrition, there are still plenty left today to satisfy restorers and customizers alike. Better yet, when we use the term “customizer” in 2019, we’re mostly talking about resto-modders, a.k.a. folks who tastefully retain and respect the external appearance, but go wild under the skin with chassis, suspension, interior comfort, brakes, and driveline upgrades.

But it wasn’t so long ago when customizers (often spelled with a “k”) turned the equation around, grafting hideous fiberglass wings, scoops, flares, and spoilers on the plastic body while leaving everything mechanical alone. Sadly, the result was often clownish and gaudy. But times and tastes have changed since they locked up Manual Noriega.

So, as much as we all love and respect a perfectly restored 1964 Rochester fuelie (1,325 built) or N03 “tanker” coupe (the 36-gallon fuel tank appealed to endurance road racers who didn’t have to stop as often to refuel), the plain truth remains, the rest of the Corvette herd is ripe for upgrading. 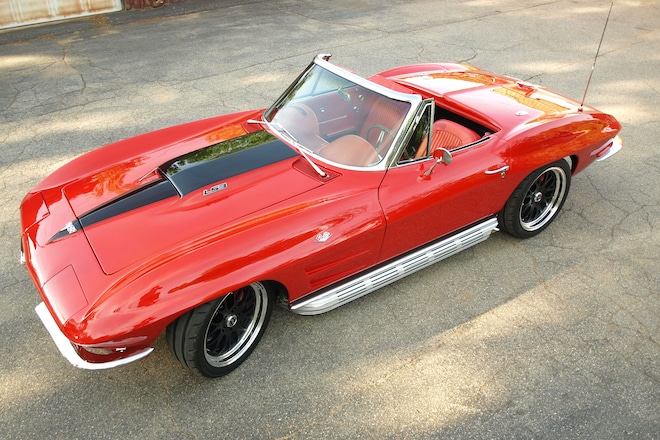 In stock trim, 1964 Corvettes just don’t drive as well as they look. Few vintage cars do. Though diehards don’t mind carburetors with manual choke cables, or drum brakes that put you in the next lane when stabbed, the core of the classic car audience has been spoiled by the new car experience. Today’s auction block results prove most buyers will pay much more for a nicely resto-modded Corvette (or Tri-Five Chevy, Baby T-Bird, 1965-’73 Mustang, GTO, etc.) than a concourse correct relic sitting on skinny 6.70-15 white walls. 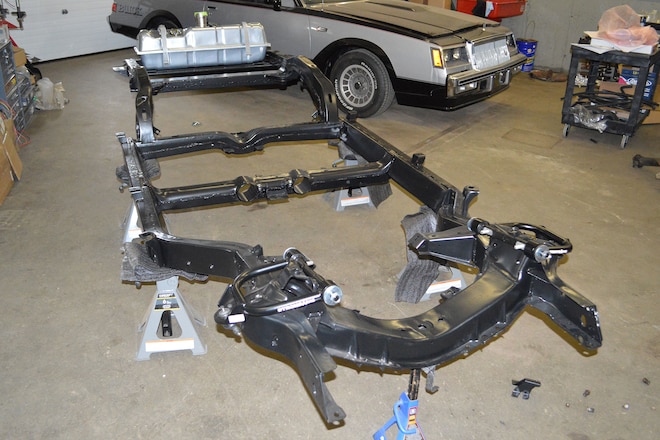 Thanks to the fact GM used the same basic underpinnings on all C2 and C3 Corvettes built from 1963 through 1982, a thriving aftermarket has evolved to add modern upgrades beneath the skin of any vintage Corvette. Sure, some purists may cringe, but happily most of what’s done to these cars is reversible. In this story, let’s examine how Josh and Eric Buzzell of NextGen Performance in Spencer, Massachusetts brought a 1964 Sting Ray roadster into the 21st century with some basic—but much needed—modifications. 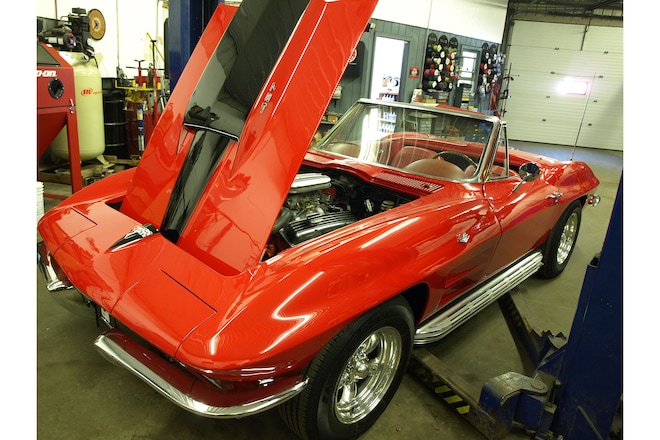 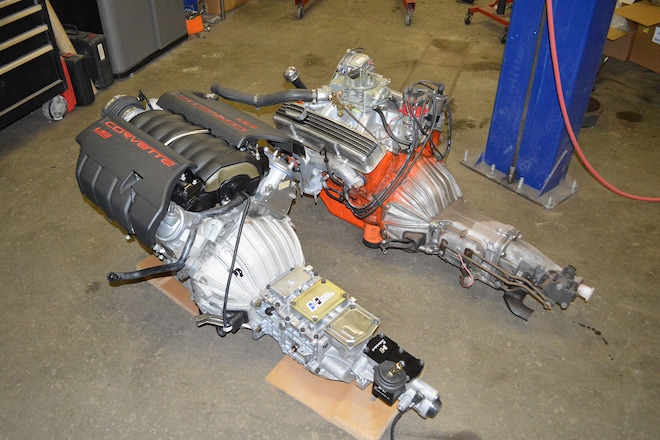 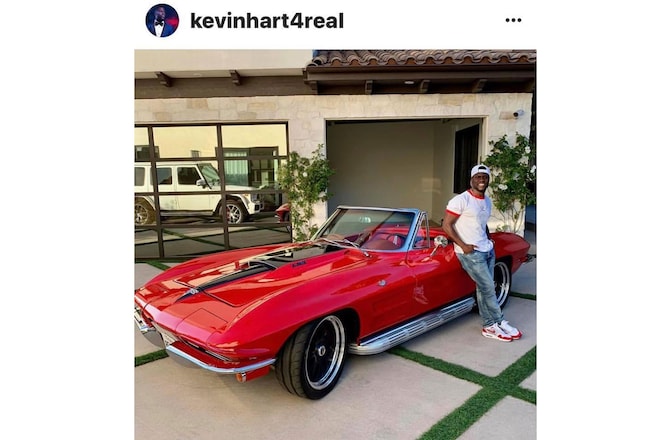 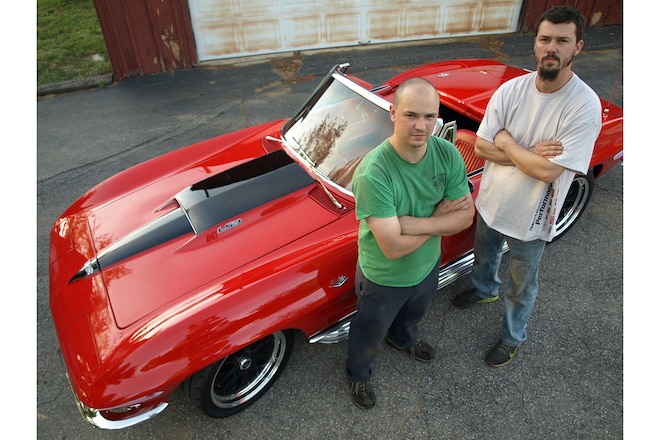 Engine: The Corvette initially arrived at NextGen Performance with a mild 327 (that’s an old school 5.3L for any metric fans), but it wouldn’t last long. A 2008 was a good year for standard Corvette power plants; the base 6.0 liter / 364 cube LS2 grew into the 6.2 liter / 374 cube LS3, thanks to a factory 0.060 inch overbore (from 4.00 to 4.060), 10.7:1 compression, 42-lb/hr. fuel injectors, rectangular-shaped intake ports, hollow intake valve stems, and more. In bone-stock trim, the LS3 delivers 430 horsepower and 424 lb-ft of torque. Best of all, its all-aluminum construction slashes 50 pounds off the Corvette’s nose compared to the outgoing iron mouse. More good news is the fact the stock Corvette front dress fits the 1964 frame and engine bay without mods. The only deviation was elimination of the power steering system and AC.

Induction: The new-for-2008 Corvette LS3 induction system included a fresh intake manifold design capable of flowing 365 cfm with no modifications. For comparison, before the 2008 revamp, the best Corvette intake manifold was the 320cfm unit found atop the 2001-’04 LS6. By the way, this “best of” statement covers Corvette intake manifolds all the way back to the first triple-Rochester side-draft carburetor unit of 1953 as well as the high-rise Winters Foundry goodies of the L88 era. We truly are living in the “good old days” right now! To package the K&N conical air filter away from radiator heat and the upper radiator hose, NextGen’s Eric Buzzell fabricated a nifty aluminum gooseneck from three sections of tube. He says: “Air inlet temperature tumbles from over 180 degrees to the same temperature the driver is breathing.” This cooler air is denser and best for performance. The stock 2008 throttle body was retained. On SMG Motoring’s Dynojet chassis dyno, the red ’64 roadster delivered 351 horsepower at 5,450 rpm and 375.13 lb-ft at 4,500 rpm. 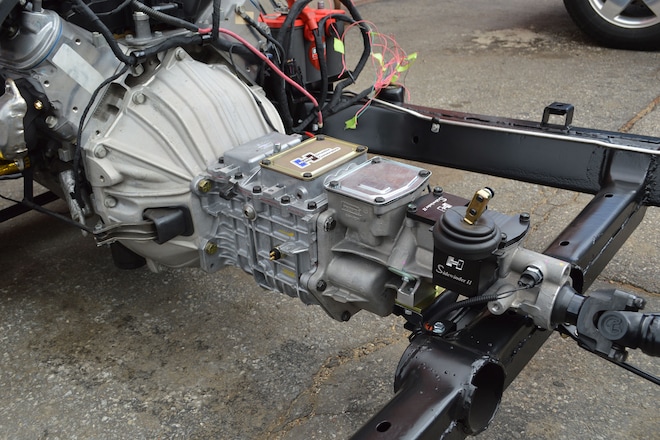 Transmission: Though not indicated by codes presented on the body tag, clues suggest this car was born with a manual transmission. The 3-speed manual was still standard Corvette fare right through the 1969 model run, and this feature car was upgraded from a wide-ratio M20 Muncie to a brand new Tremec TKO600 5-speed manual with overdrive and a 525-hp rated Street Comp clutch kit. Using a complete kit from Hurst Driveline with a Hurst Sidewinder II shift handle conversion assured trouble-free installation. Until the 1984 arrival of the Doug Nash-supplied 4+3 manual transmission option, no Corvette came from GM with overdrive. 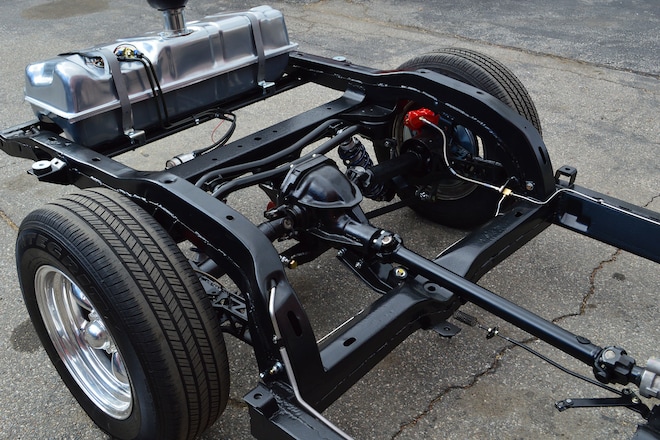 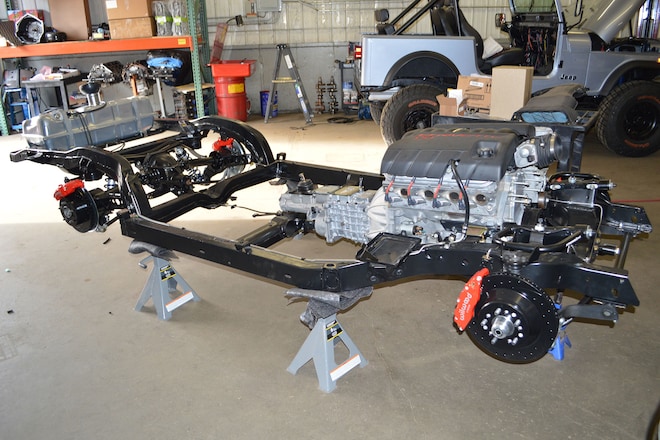 Chassis / Suspension: The original 1964 frame was in excellent condition and required only a cleaning before being powder coated black by Central Connecticut Coatings of Hartford, CT. The stock Sting Ray suspension was a radical departure when introduced in 1963. Up front, Corvette finally got away from the king pin suspension used since 1953. Lacking anti-dive geometry, the king pin setup hurt road course handling and was high on Corvette Chief Engineer Zora Arkus-Duntov’s list of fixes. The new-for-’63 front suspension featured ball joints (Chevy passenger cars got them in 1955) and stamped control arms from the full-size (Impala, Biscayne) parts bin. Out back, Duntov’s wish for independent rear suspension (IRS) was also granted—but with compromises. The heavy transverse leaf spring weighed anywhere from 44 to 60 pounds, depending on which suspension option was chosen. A fix in the form of a nifty 8-lb. plastic spring arrived in 1981—a little late to have much effect on Corvette’s racing legacy. All of the factory stuff was replaced in favor of a Ridetech coilover system for 1963-’67 Corvettes. With four-corner coilover shocks and rugged tubular / bridge girder control arms with a rear Muscle Bar, the bolt-in system offers superior handling with less flex and mass than stock. 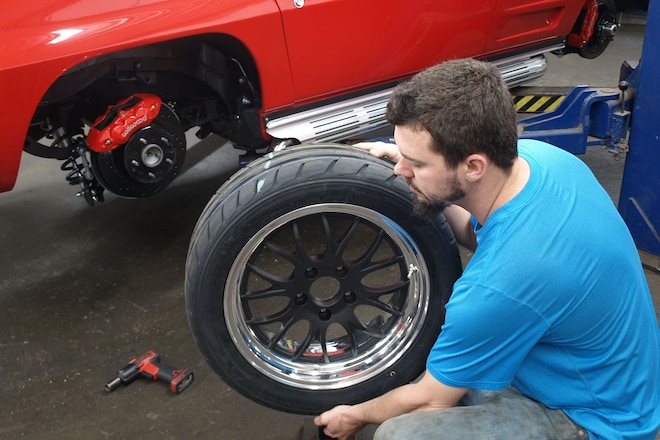 Brakes: Many Corvette fans forget that four-wheel disc brakes didn’t arrive until 1965. Before that, all Corvettes used 11-inch drums all the way around. Borrowed from the full-size Chevy parts bin, they were prone to fade in competition settings which led to a series of fixes involving air ducts, backing-plate scoops, metallic shoes, and finned iron drums. None of it begins to compare to the four-corner Wilwood disc brake conversion kit installed by NextGen. With drilled rotors and six-piston / four-piston (F/R) calipers at each wheel, Duntov would have loved it. Exhaust: The Corvette’s first factory installed N14 side mount exhaust system – that’s side pipes to you and me – wasn’t offered until 1965 for an extra $134.50. And they were not popular. Only 759 of the 23,564 Corvettes built in ’65 got them. But in the years since, they’ve become a popular add-on. Already present when the car arrived at NextGen Performance, the guys decided to retain them to let the LS3 exhale a little better. They’re fed by the stock cast iron LS3 manifolds. Before the 1965 arrival of side pipes, 1963-’68 Corvette order forms listed the N11“off road exhaust system”. These are not side pipes, but rather a louder system with larger tubing and low restriction mufflers. The N11 setup ran the entire length of the car and exited in the usual spot through the rear valance panel. 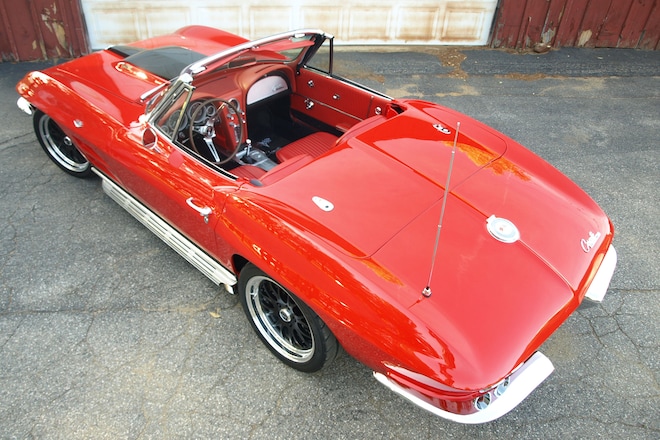 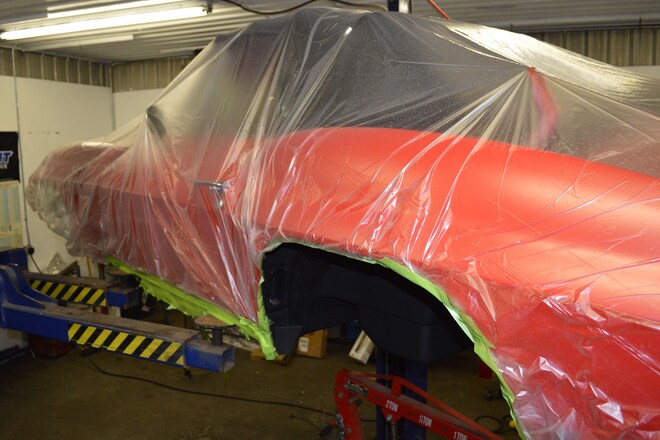 Paint / Body: NextGen Performance specializes in mechanical makeovers, that’s why they chose a Corvette that was already wearing an excellent Torch Red paint job. The only external modification was switching the 427 hood medallions for LS3 emblems. That said, the Buzzell Brothers spent countless hours masking the body to protect it from harm during wrenching. All underbody surfaces were coated with matte black. Fresh chrome reproduction bumpers were sourced from Classic Industries. 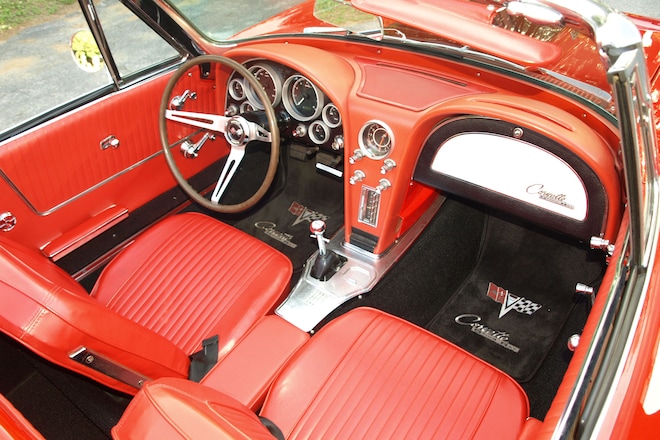 Interior: The stock interior was augmented by a Dakota Digital instrument cluster packing VHX gauges, including an 8,000rpm tachometer and 160mph speedometer. In the old days, sidewalk spies deciphered Corvette tachometer redlines to glean clues on engine potency. Solid-lifter mills red-lined over six grand, tame-juice lifter mills went to five grand. The stock U69 Delco AM-FM radio was a popular option and was installed in 20,934 of the 22,229 Corvettes built in ’64. At $176.50, the radio cost $68.90 more than the hottest non-fuelie 327, the 365 horsepower L76 with solid lifters and a Holley 4-barrel ($107.60). Where were peoples’ priorities?