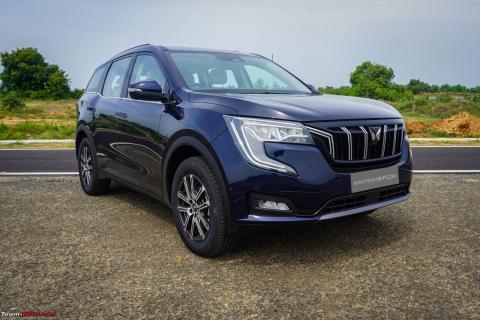 The Mahindra XUV700 is expected to put a dent in the Hyundai Creta, Kia Seltos, Tata Harrier and Safari sales.

The feature-packed Mahindra XUV700 offered at an enticing price tag was definitely going to make life difficult for brands like Hyundai, Kia and Tata. In fact, it is said that Mahindra’s market analysts expect the car to poach around 28-33% of the Creta and Seltos customers and 20% of the Harrier and Safari customers.

Mahindra expects the AX5 (O) variant to be the best seller in the AX range and the Blue and Silver colours to have the highest demand. A fair number of prospective ‘AX7’ buyers could also opt for the automatic transmission option.

Now coming to the entry-level ‘MX’ variant, it is said that Mahindra is unlikely to discontinue it as it will share its powertrain with the upcoming Scorpio. Although fairly equipped, the MX variant was believed to be introduced just to give the car a low starting price.

Earlier, there were reports of XUV700s being stored at the plant awaiting ECUs. Apparently, this is not true as Mahindra is said to have enough chips to produce around 10,000 units.

As you know, the XUV700 is loaded with tech, which means there’s always a chance of something going wrong. However, Mahindra hopes that customers won’t face any major hardware related issues since they have put the systems through enough road tests. That said, as is the case with most new launches, we can expect some software glitches initially.

Meanwhile, work of the XUV700 facelift is already underway, along with the XUV900 coupe, both of which are likely to debut around 2024-25.

Thanks to BHPian ram87pune for sharing this information with other enthusiasts!