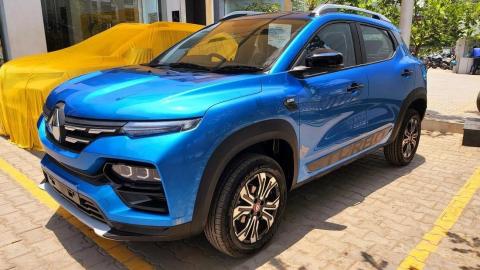 I use it more than my Maruti Ciaz because it is much more comfortable to drive on bad & bumpy roads.

BHPian abhisheksircar recently shared this with other enthusiasts.

1800 km and 2 months and we are absolutely loving the upgrade from the Celerio.

I have now got used to the small niggles like the seat belt position etc. Considering the roads in Bangalore, I have been taking the Kiger out more than my Ciaz these days. It’s much more comfortable to drive over potholes and on bumpy roads. Purpose served.

So the first service is within 2 months or 2000 kms, whichever comes first. I went right on time to be hosted by Santosh who was nice to have stepped out to greet me. I was introduced to Nishank, who is one of the service advisors there. 3 of us and one more engineer took the car for a test drive. There is a defined route which includes good and bad roads. It’s actually a good track to test every possible issue. This service was supposed to be a general checkup and hence mostly quoted as a “Wash the Car” service but they all took time to understand any anomalies. The tyre pressure was on the higher side, the mats were not best suited for the pedals and the engine bay is being visited by rats as there were paw marks. They didn’t miss anything! Although the brake issue was not replicated, they took note of that too.

Santosh has more than 2 decades of experience with brands like Suzuki, Porsche, Audi etc. He understands cars. I also noticed that he is quite serious when he is taking the test drive asking his team to take notes of the observations he was making while driving. It’s not just a joy ride.

I expected the service to be just a wash and out but it took a good 4 hours as they cleaned up the brake pads, just to be sure and attended to any concerns I had like a rattling sound on one of the panels which was narrowed down to a loose bolt which could be a result of the accessories installed where the panels were removed, like the puddle lamps. Presumption. Nishank kept sending me pictures of the progress on WhatsApp which made me comfortable. There was a software update too which took a while and no one can do anything on the car when that’s going on.

The first service cost me about 360/- INR which included washer fluid, grease, brake clean etc. From the next 1 year-service, it should be ideally 0 because of the easy care I have which covers everything, is what I understood. I paid a bit extra for a 3M rodent repellent spray treatment as well.

If I had to nitpick, I would say it was me missing the NEXA experience of sitting in a nice lounge and seeing my car getting serviced through a large glass window. This service lounge and setup is at par with the Suzuki Arena setup or any other general service setup with the availability of wifi, tea/coffee and a sitting area equipped with sofas.

In short, it was a big sigh of relief to know that it’s hopefully going to be a smooth sail from here on.