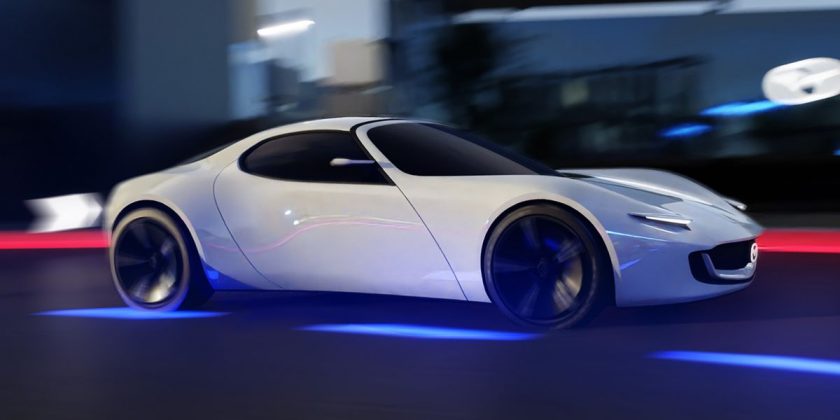 Mazda has unveiled its Mazda Vision Study Model as part of the announcement of the company’s plans for the rest of the decade. The concept bears a striking resemblance to the FD Mazda RX-7 of the 90s with a modern twist.

The concept is still merely a render at this point, but as is often the case with Mazda’s concept models, it could point to the future of the brand’s design language. There are a few notable similarities with the Mazda RX-7, such as the rounded doorline where it meets the rear wheel arch, and the shape of the rear windscreen.

Pop-up headlights have not been a fixture on cars since early 2000s regulations on pedestrian safety, but the design cleverly nods to those used on the 90s rotary-powered icon at the front, with sleek low-profile headlights that stick up from the car’s flowing body shape.

The rear lights consist of four half-moon shaped semi-circles, unlike the RX-7’s long light bar, but somewhat reminiscent of the tail light cluster shape of the NB MX-5.

A previous Mazda Vision concept, known as the RX-Vision, touted the comeback of a 2.6-litre Wankel rotary engine, but since the industry’s move to electric power, rumours of a spinning-Dorito-powered car have gone very much quiet. While the Mazda Vision Study Model looks very much like the FD RX-7, there are no details surrounding its potential drivetrain or any evidence of a potential production or physical model at all.

Earlier this year, Mazda raised eyebrows by filing a patent detailing a rear-wheel drive sports car powered by a triple-rotor engine. While the new concept could be related, it might have nothing to do with the proposed rear-drive rotary machine – manufacturers will frequently file patents for things that never see production reality.

Unsurprisingly, Mazda’s future will mostly consist of a rollout of electrified vehicles leading up to 2030, but the brand will employ a ‘multi-solution’ approach leading up to the end of the decade. Electrification is just one tool in its arsenal to cut down emissions and adhere to regulations, with other solutions including new ICE models, the exploration of carbon-neutral fuels and hybrid technology. The brand is aiming for 40 per cent of its global sales to be fully electric by 2030.