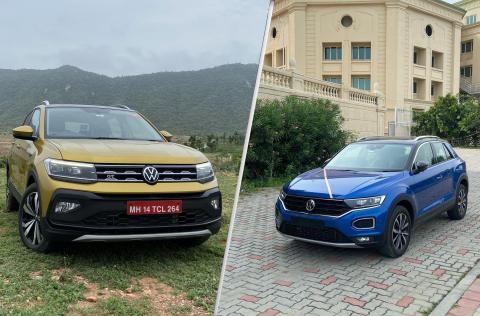 I did look at the VW Virtus, however, didn’t like it and the Jeep Compass diesel AT is out of my budget.

BHPian shilpa3326 recently shared this with other enthusiasts.

I’m on the lookout to buy a new SUV mainly because of the current road conditions while traveling as many areas have roads under construction resulting in patchy roads filled with potholes for a short stretch.

I currently own a Honda Amaze, I used to own a Honda City, however, sold it as the ground clearance was low resulting in me scraping the front bumper whenever I used to take it to my home.

I like the Honda Amaze, however, it’s not as fun to drive as my brother’s Polo GT, which I just adore. So, I’m mainly looking for something that’s fun to drive, has enough boot space, and has a sunroof.

I did look at the VW Virtus, however, didn’t like it and the Jeep Compass diesel AT is out of my budget.

So, it has come down to a new Taigun GT Plus, which costs around 22.5L on-road or a preowned T-Roc 2021, which costs 24L. Even though the ride quality is a tad bit stiffer on the T-Roc, I loved the way it looks and drives and as there’s no news of a new batch coming in anytime soon, it has come down to either the Taigun GT Plus or a preowned T-Roc. What would you guys recommend?

Here’s what BHPian shanxz had to say on the matter:

24 lakhs for a 2021 T-Roc seems expensive and someone selling a year old unit raises some red flags but I may be wrong on that.

Do note that the T-Roc is a CBU so any maintenance/repairs is going to cost more than the Taigun 1.5 which has its 1.5 TSI – DSG powertrain as the only major component which isn’t localized. On the flip side the T-Roc will definitely feel more premium than the Taigun.

Since you haven’t mentioned any specific requirement for more power I would suggest to pitch the Taigun 1.0 Topline against the T-Roc to get a more balanced approach with both cars pitching their USPs of performance, cost, maintenance costs over its expected time with you.

Although I can’t suggest a black and white decision, here are some points to consider:

Here’s what BHPian androdev had to say on the matter:

Understandable that T-Roc is more appealing, however it would be much easier to live with Taigun due to much better local service support. Taigun GT has a very good drivetrain so you won’t be missing out much. Don’t underestimate the hassle of owning a CBU car sold in such few numbers. In fact, you might want to check out used Tucson, X1, GLA, V40 etc if you are in the mood for “yeh dil mange more”

Here’d what BHPian yedukrishnan199 had to say on the matter:

A new VW T-Roc used to cost around 27 lakh on-road in Kerala, whereas a one-year used T-Roc costs you around 24 lakhs, it doesn’t seem like a good deal to me considering that it is a discontinued model and there are no signs of VW that they are reintroducing it again, Moreover as pointed out [email protected], being a CBU, maintenance, and repairs for the T-Roc are going to be expensive.

However, the T-Roc is a much better built and luxurious car than the Taigun based on the MQB A1 Platform and it does show in the quality of interiors and build quality. The Taigun is a locally manufactured product based on the MQB AO IN platform designed for India.

So it basically boils down to whether you prefer a brand new car (Taigun) or a used premium car (T-Roc).

Here’ what BHPian Guna had to say on the matter:

The T-Roc came with a panoramic sunroof. Other than this, I don’t see a strong case for T-Roc over a new Tiguan (Of course you get CBU build quality, some driver assistance features like ‘lane assistance’ ‘front collision warning’…. etc but those advantages are negated by the fact that it is a preowned car and the repair parts would always take much longer to arrive).

But if you personally like the T-Roc (I do), it is a different matter. It would be the case of ‘heart ‘over ‘head’.