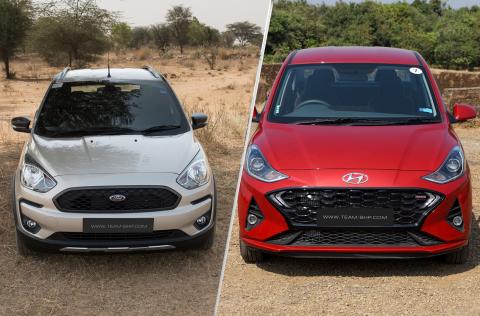 The car will be used predominantly within and outskirts of the city with daily running varying between 40~60 kms per day and occasional weekend family outings.

BHPian ChandrasekarMN recently shared this with other enthusiasts.

Hi team. One of my friends is looking for a preowned car for his daily drive (Chennai being the city) predominantly within and outskirts of the city with daily running varying between 40~60 kms per day and occasional weekend family outings. Within his budget there are 2 shortlists : a 2019 Aura 1.2 crdi and a 2019 Freestyle 1.5 TDCi, both currently under 20K kms ODO. Kindly suggest the better option, considering the below priorities:

While my recommendation is for the freestyle (may be influenced by me owning an Aspire TDCi) considering the almost equivalent Fuel Economy, but a huge Fun To Drive (FTD) factor, he is currently inclined towards the Aura due to a sedan’ish shape (social standing).

But I would love to understand the view of the team, as we may be missing out on some important things when being biased.

Here’s what GTO had to say on the matter:

With Ford’s exit, the Hyundai Aura will be the safest best here and the easier car to own. Also tell him to consider a Dzire diesel (best for his intended usage) or a preowned i20 diesel (superior car overall to the Aura, and since boot isn’t important to him). The i20 will have equal / better social standing than the Aura too.

Here’s what BHPian bijims had to say on the matter:

Between a Hyundai Aura 1.2 CRDi and Ford Freestyle 1.5 TDCi , I have listed which car to go for with reasons mentioned below:

So overall, the Freestyle wins on performance, highway stability and safety which are not the highest priority for your use case and the Aura wins on fuel economy which is of utmost priority, boot space and maintenance.

However another factor to be considered is the fact that Ford has exited the Indian market and therefore resale, spare parts etc are more likely going to be an issue if you intend to hold on to the car for long. hence the Hyundai Aura is likely to be the safer bet.

Here’s what BHPian fiat_tarun had to say on the matter:

As a vehicle, I think the Freestyle is the much better engineered product, however from your description of this person none of the strengths of the Ford are a priority for him, although I think over time one will appreciate the benefits of a well engineered car.

I personally have never been a fan of the Hyundai 1.2L diesel based on my experience of sitting in countless Xcent cabs. It has vibrations, is not very refined and feels very short on power.

I would say let him take both cars for a nice longish drive and decide. Ford service should be fine for another 5 years or so.

Here’s what BHPian self_driven had to say on the matter:

This being a second hand car, I’d suggest to go with whichever is in better condition. Since your friend is neither particular about Freestyle’s performance nor about Aura’s boot space, I think both cars deserve an equal chance. As a product, I would rate Freestyle slightly above Aura but not by a huge margin (esp. for a non-enthusiast).

Here’s what BHPian ashis89 had to say on the matter:

I agree with GTO. For a long term and hassle free ownership, Ford should be given a pass (unless available for a considerable discount). I suggest the DZire or a Swift for the fuel economy and ease of ownership.

PS: My FIL owns a Freestyle diesel. The service experience is already becoming slightly patchy in a semi-urban town in Odisha. Also his 3.5 yr old car hasn’t aged well as I expected.

I found my review of the Freestyle that I wrote two years ago. Earlier this year, when I drove it the interior rattles had increased some more. Highlighting the points which might matter from a pure city use point of view.

Low end torque is much better in the KIA. Slow down and you can still pull away happily in higher gears with RPM hovering around the +/-1000 mark. On the other hand, the Ford eggs you to downshift unless you want to ride the clutch.

Clutch is heavier on the Ford and frequent gear changes will tire you faster.

I could hear some rattles from the dashboard and boot area in the Ford.

Two shortcomings that I found in the Ford – lack of under thigh support and side bolstering on the front seat and poor headlights.

Here’s what BHPian anjan_c2007 had to say on the matter:

Post Ford’s exit, its always better to keep a safe distance from used Ford’s however attractive, drivable, ergonomic, well engineered etc these may be. Unless your friend desires to sell it off after five years of usage it’s not a good buy. Even then, he would get much less than what he bought it for. And selling the car would pose a problem.

Aura is not that eye catching with more USP’s, other than the fact that it does its duties.

There are ample used cars in the market and he can for sure get a good choice if he chooses a Maruti, Hyundai or Honda sedan within his budget. Patience, time and motivation play important roles and as a rule, narrowing our choice to only two cars is avoidable while shopping for used cars.

Here’s what BHPian shancz had to say on the matter:

I would say look elsewhere and some more.

If your friend is worried about expensive maintenance then wouldn’t the disproportionate drop in resale of the discontinued Freestyle turn out to be quite expensive overall? And this is not a guess. Spares will eventually get dearer and costlier in case any non standard repair has to happen.