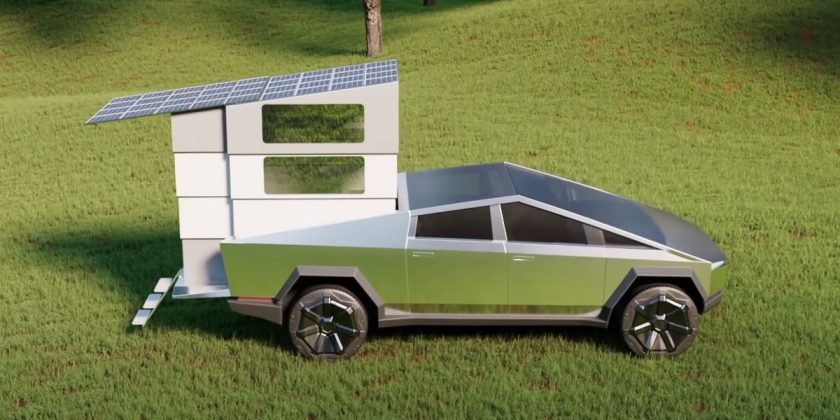 Tesla never does things the normal way, and the Cybertruck (and its botched launch) is proof of that. Once it does hit production, a new company says it will offer a similarly space-age camper module to fit snugly in the bed of the Cybertruck; the perfect solution for those who want to take Tesla’s angular pickup into the wild.

The CyberLandr is made up of four telescopic sections, which rise out of the bed to create a room with a lofty ceiling. A section then slides out onto the truck’s tailgate, giving you a bathroom perched out back. If we’re honest, there are a couple of similarities between this and Clarkson’s Citroen CX motorhome in old Top Gear, and now we’re going to hide behind the sofa in case the Tesla fanboys come for us.

That main room is your bedroom, kitchen, living room and office. The kitchen includes a porcelain worktop with an integrated two-ring induction cooker, plus a tap controlled by your voice (of course).

The seats can be removed and used outside, and they also fold down to become a “surprisingly comfortable” queen bed (CyberLandr’s words) sitting over the sink and the countertop – although we can’t see where your voice-controlled tap goes. Presumably you’d have to tell it to get out of the way.

We’re told the bathroom has underfloor heating and that the toilet cleans itself. It’s meant to feel like a spa in there, although it does look like you’ll have to straddle the toilet when you have a shower.

Obviously, there’s a whole host of tech, such as home automation to control lights and climate by an app or your voice. Buyers also get a 32-inch smart TV, surround sound, WiFi and StarLink internet.

The add-on is set to be built near the Cybertruck in Texas and it’s thought that eventually you’ll be able to order the Cybertruck and CyberLandr as a pair. The company says its camper module is ideal for overlanding, business trips, tailgate parties at American football games, emergency situations and as a command post for paramedics.

First Tesla Cybertruck customers are set to get their pickups before the end of the year, and Tesla hasn’t even revealed the final dimensions yet, so the CyberLandr will need to be developed quickly – if it does indeed get built at all. As you might’ve guessed by the computer-generated images, the product doesn’t actually exist yet – and the company’s website is unlikely to make you confident in buying it.

What do you think of it?