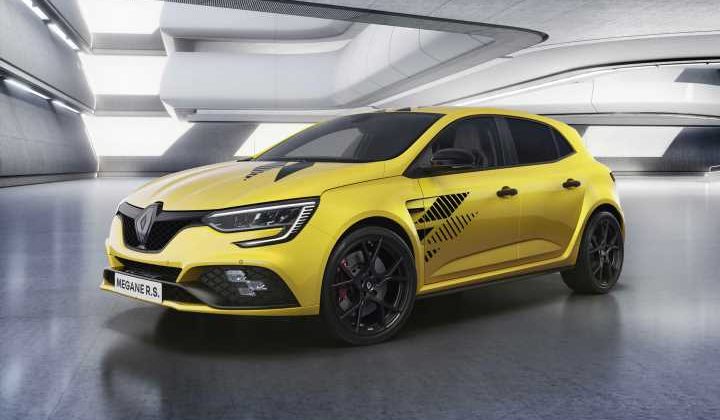 This year marks plenty of significant automotive anniversaries, one of which is the Renault Sport Megane’s 20th birthday. Apparently, the ‘saga’ began in 2003, even if most of us will remember 2004 as the introduction of the Megane 225. Whatever, the model line has spawned some of the 21st century’s greatest ever hot hatches since then, including three Nurburgring record breakers, and so it’s a birthday well worth celebrating. Not least with the 20th year of Renault Sport Meganes also being the very final one, as the ‘Renaulution’ ushers in the electric era.

The Megane R.S. Ultime is the limited edition car to mark a year of such significance, a car described by Renault as taking the Megane ‘to new heights’. Though based on the existing 300hp Trophy, including its Cup chassis, hydraulic bump stops and Torsen diff, the Ultime evokes the much-loved Clio R.S.16 concept with its widebody looks and standard stickers. This Megane is 60mm wider at the front and 45mm at the rear, further enhancing that low and broad stance that’s made this fourth-generation car such a looker. Also marking it out are huge vents behind those beefed-up front wings, R.S. Vision lights, a chunky rear diffuser and a central exhaust the size of a tunnel. There’s some Trophy-R influence also, as well there should be, albeit limited to the Bridgestone Potenza S007 track day tyres.

The Ultime isn’t as stripped out as the Trophy-R inside, boasting two big driver displays, a Bose stereo and adaptive cruise control. It does get Recaro seats, though, and a numbered metal plaque like all the great Megane special editions. It’s even signed by Laurent Hurgon, the man responsible for all those records back to the original R26.R’s 8:08 at the Nurburgring. He said of the Ultime: “Since the Megane II phase 2, we have constantly improved its dynamic performance in order to remain the leader in front-wheel-drive sports cars. The records on the Nurburgring Nordschleife are unforgettable challenges, full of passion, adrenalin and emotion. And now, Megane R.S. Ultime… I am particularly proud to sign the version crowning this wonderful saga.”

Interestingly, Renault Sport is choosing this weekend’s Tokyo show to exhibit the Ultime, citing the fact that there are in the region of 10,000 R.S. fans in the country for the decision. Certainly the pictures seem to confirm that a right-hand drive version is in the works, and Renault mentions options like the sunroof and head-up display only being offered for LHD cars. So even if there aren’t any UK cars (more on that when we have it) there might be the possibility of importing one with the wheel on the correct side. Renault will build 1,976 Ultimes, because 1976 was the year of Renault Sport’s creation, offered in Sirius Yellow, Pearl White, Tonic Orange, or Star Black. The campaign for cars over here starts now…