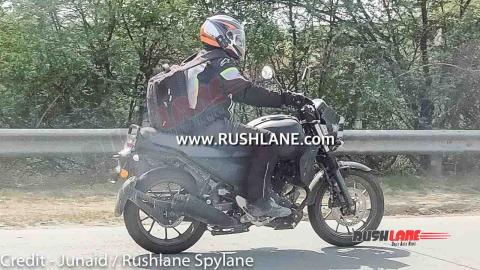 The test bike appears to be an early development mule. It could be the XSR 250 or the Indian version of the XSR 150.

A test mule of what is believed to be a new Yamaha motorcycle has been caught testing. Reports suggest that it could be the XSR 250.

The test bike which was spotted on the Yamuna Expressway appeared to be an early development mule. As you can see in these images, the bodywork on the bike seems unfinished. The alloy wheels and front suspension appears to have been borrowed from the FZ series. The bike also has a fairly flat seat and the upright posture of the rider suggests that it could be designed with long distance cruising in mind.

While it is unclear as to what engine was powering this prototype, it has been speculated that it might have a 250cc engine from the FZ25. This engine puts out 21 BHP and 20 Nm and is paired with a 5-speed gearbox.

Another possibility is that the bike could be using the 149cc engine from the FZ and FZS. Which means it could be the Indian version of the retro-styled XSR 155.