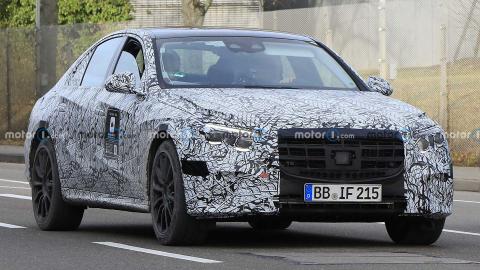 Mercedes is also working on introducing an electric version in the form of the EQE sedan.

The next-generation Mercedes-Benz E-Class has been spied testing in Germany, ahead of its unveil sometime in late-2023.

The car can be seen covered heavily in camouflage, revealing little to no design details of the upcoming model. However, the spy images do showcase the sedan carrying forward a similar profile as the current model. The next-gen E-Class though is expected to feature significant styling updates, along with a new set of LED headlamps and taillights, updated front grille and newly-styled front and rear bumpers.

The next-gen E-Class will also receive significant updates to its interiors. These include a new touchscreen infotainment system, digital instrument cluster and a bunch of additional features and technology similar to those on its larger sibling, the S-Class.

The next-gen Mercedes-Benz E-Class will be offered with both petrol and diesel engine options for the international market. Mercedes is also working on introducing an electric version in the form of the EQE sedan.