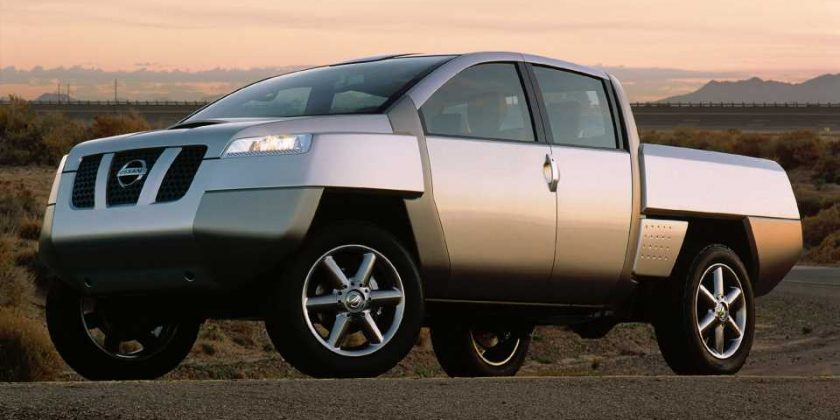 Sometimes the path not taken by a car company can have just as much of an impact on its future as the avenues it actively pursued. In the concept car world, sometimes it’s possible to look back on a daring vision that was passed over at a particularly crucial crossroads and, with the benefit of hindsight, understand how that choice rippled forward through time to impact the fortunes of a risk-averse automaker.

Such is the case with the Nissan Alpha-T, the Japanese automaker’s first public stab at a full-size pickup whose angular sheet metal and sci-fi visage are perhaps best described as the Cybertruck before the Cybertruck. When it arrived at the Detroit Auto Show in 2001, it looked like nothing from of the major players, which was entirely the point. Nissan was deep into the design process of its first true competitor to the established truck hierarchy in North America, and the Alpha-T was an impossible-to-ignore calling card meant to demonstrate just how serious it was about making a splash. 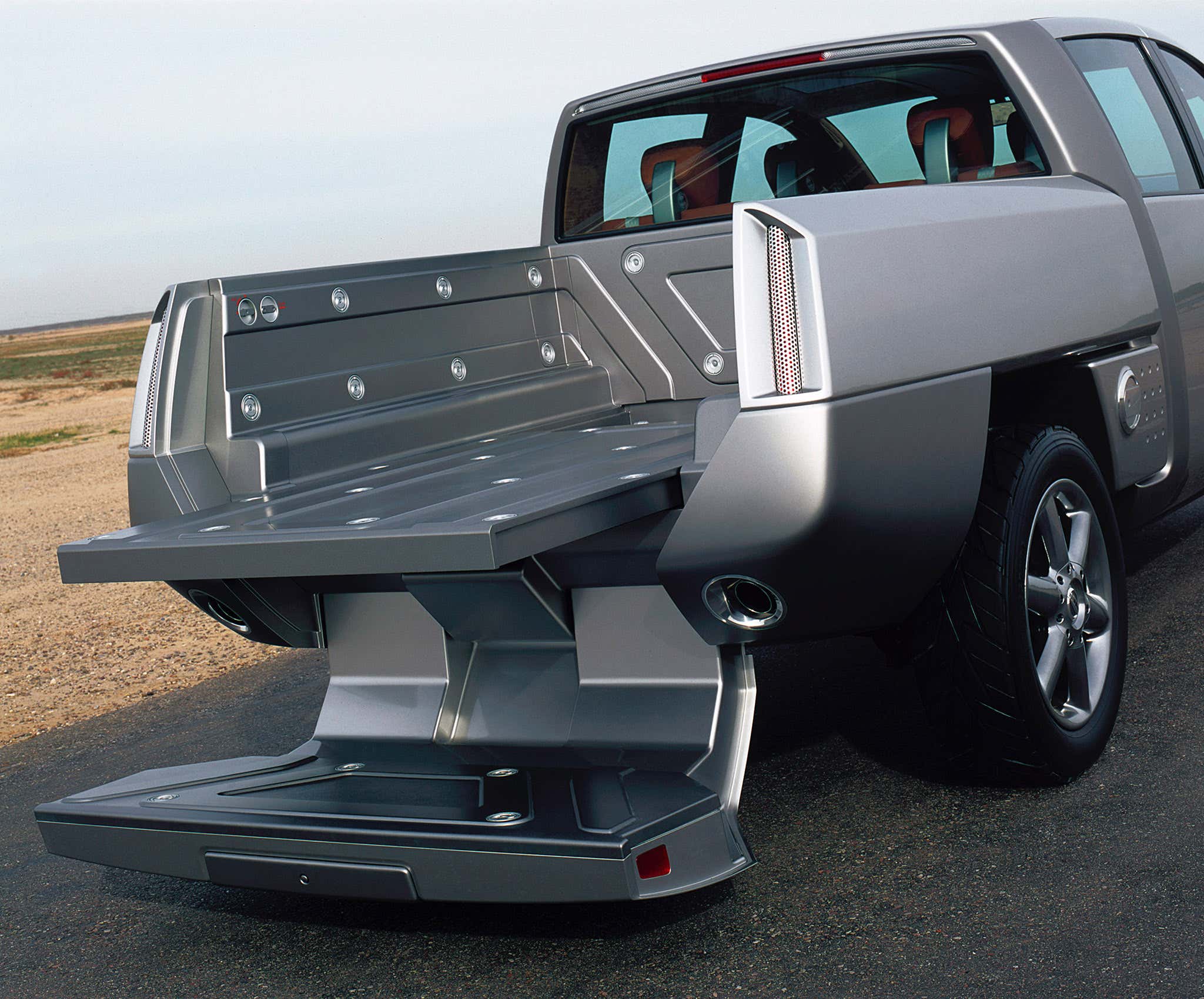 (Editor’s note: It’s easy to dismiss concept cars as marketing gimmicks and dead-end design exercises. But every once in a while, a company gives away the secret to its future without anyone noticing. With ever-grander promises about electrification, autonomy and material advances being made by today’s concepts, I thought it’d be useful to take a look through the archives to see how and when the major engineering and design trends that define the present were actually seeded. This recurring column by the great Ben Hunting is called The Most Important Concept Cars You Forgot All About, and its aim is to give you the tools to understand what’s really coming next. — KC)

Sharp and creased where its contemporaries were smooth and rounded, the Nissan Alpha-T also bundled in novel features that boosted practicality and presented buyers with a glimpse into a trucking future that’s still unpacking some of those same ideas 20 years later. And it wasn’t all for show—Nissan wasn’t shy about spending big to achieve its full-size pickup dreams, investing $1 billion in a Mississippi-based plant intended to shoulder the (planned) heavy load of producing its upcoming truck and several SUV derivatives.

But when the Nissan Titan truck actually hit showrooms for the 2004 model year, however, it completely lacked the Alpha-T’s ‘wow’ factor, delivering a muted interpretation of the concept’s visual panache and leaving every single one of its advanced features on the shelf. Sales hit 86,945 in 2005 and dropped every year for the rest of the decade, eventually going as low as 12,140 in 2015. Things are a bit better now, but the Titan’s market share is still tiny. 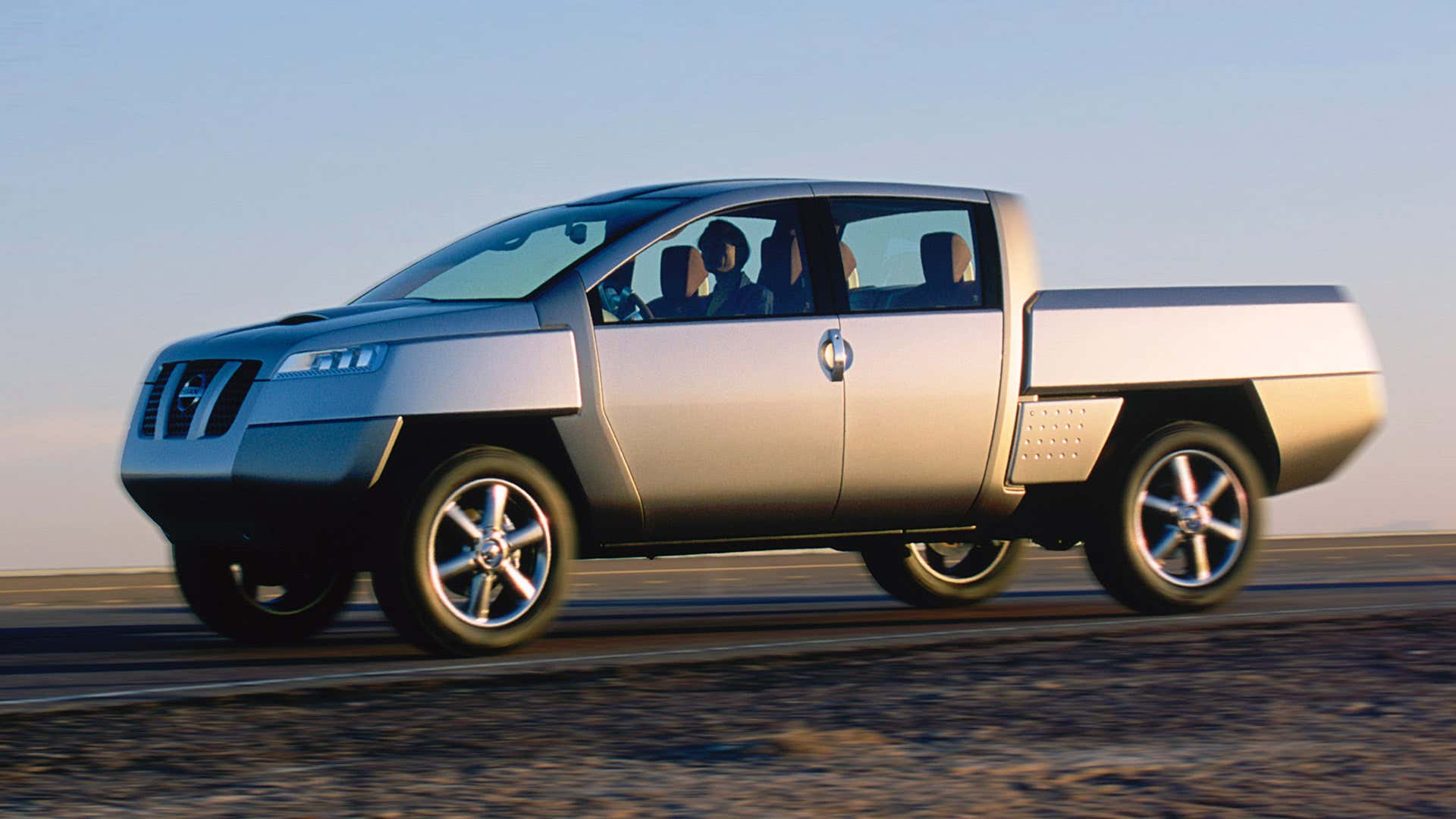 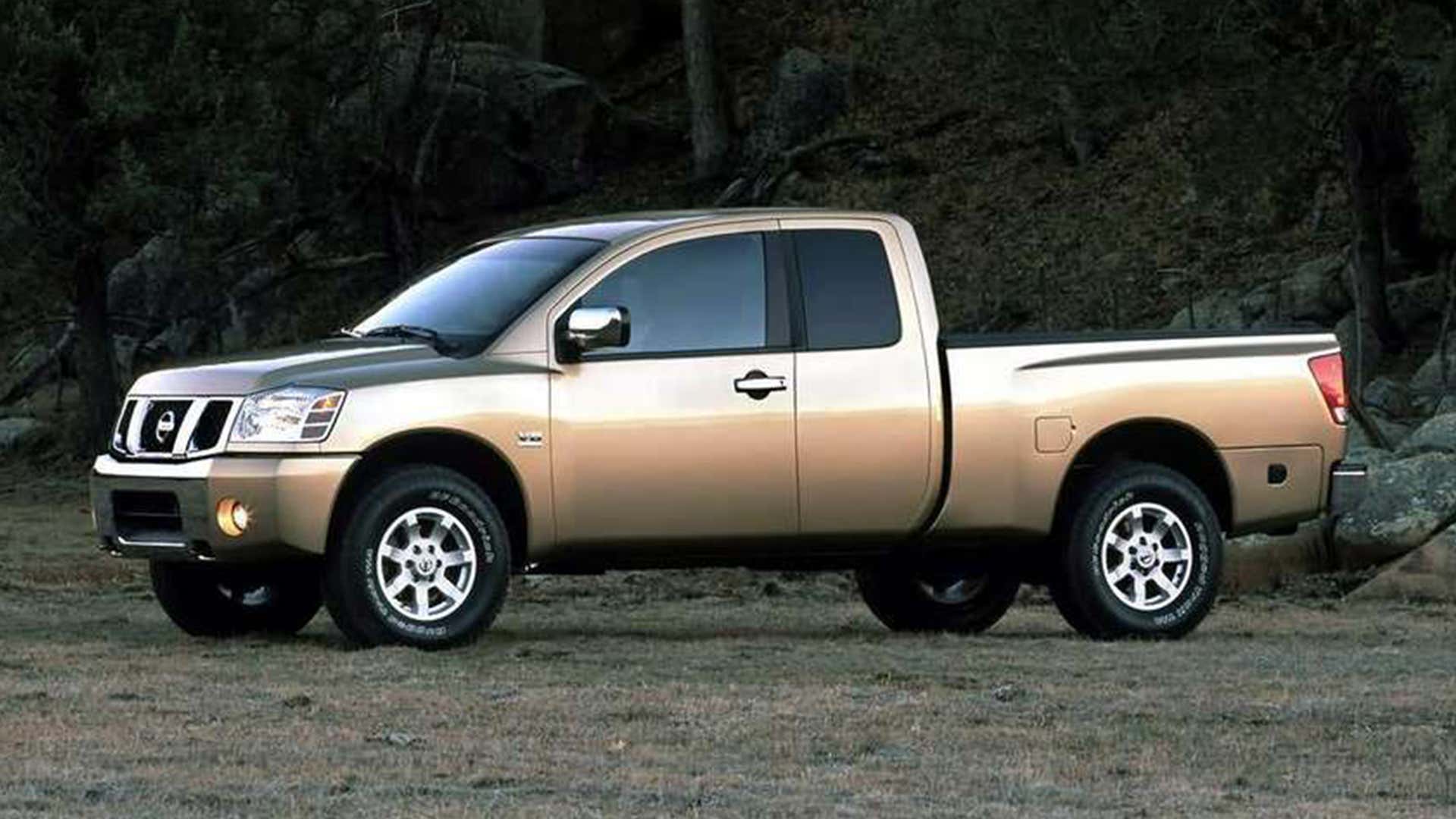 Looking back, it can be argued that watering down the Alpha-T was the original sin that cursed the Titan. The capable-yet-bland pickup ignored a crucial lesson that had been taught nearly a decade beforehand by another brand desperate to become a true contender in the lucrative full-size segment: it’s never enough to just match the competition on the spec sheet. Instead, you’ve got to deliver a knock-out punch that sends everyone reeling.

Much of the discourse about how difficult it has been for Japanese brands to crack the Detroit truck hegemony has typically focused on just how loyal its customers are. The truth of the matter is that “Buy American” hasn’t always been a central focus for pickup fans. In fact, from the end of World War II and all the way up until the early 1990s, the market was completely dominated by only two brands—Ford and General Motors—who between them claimed the lion’s share of sales.

Wait a minute—what about Dodge? While Ram (Dodge’s current branding) is now a central player, that’s a recent development preceded by nearly 50 years of struggle as a distant third among pickup customers.

Despite trucks that were in many ways just as competent as those wearing the Blue Oval or Bowtie badge, once the modern pickup era began in the 1960s, Dodge simply couldn’t make any headway in terms of winning over new customers. This became especially painful in the ’80s as pickups began their inexorable march towards daily driver status. Dodge, unable to scrape up even 10 percent of the market at the time, was on the verge of being cut off from a potentially enormous revenue stream. 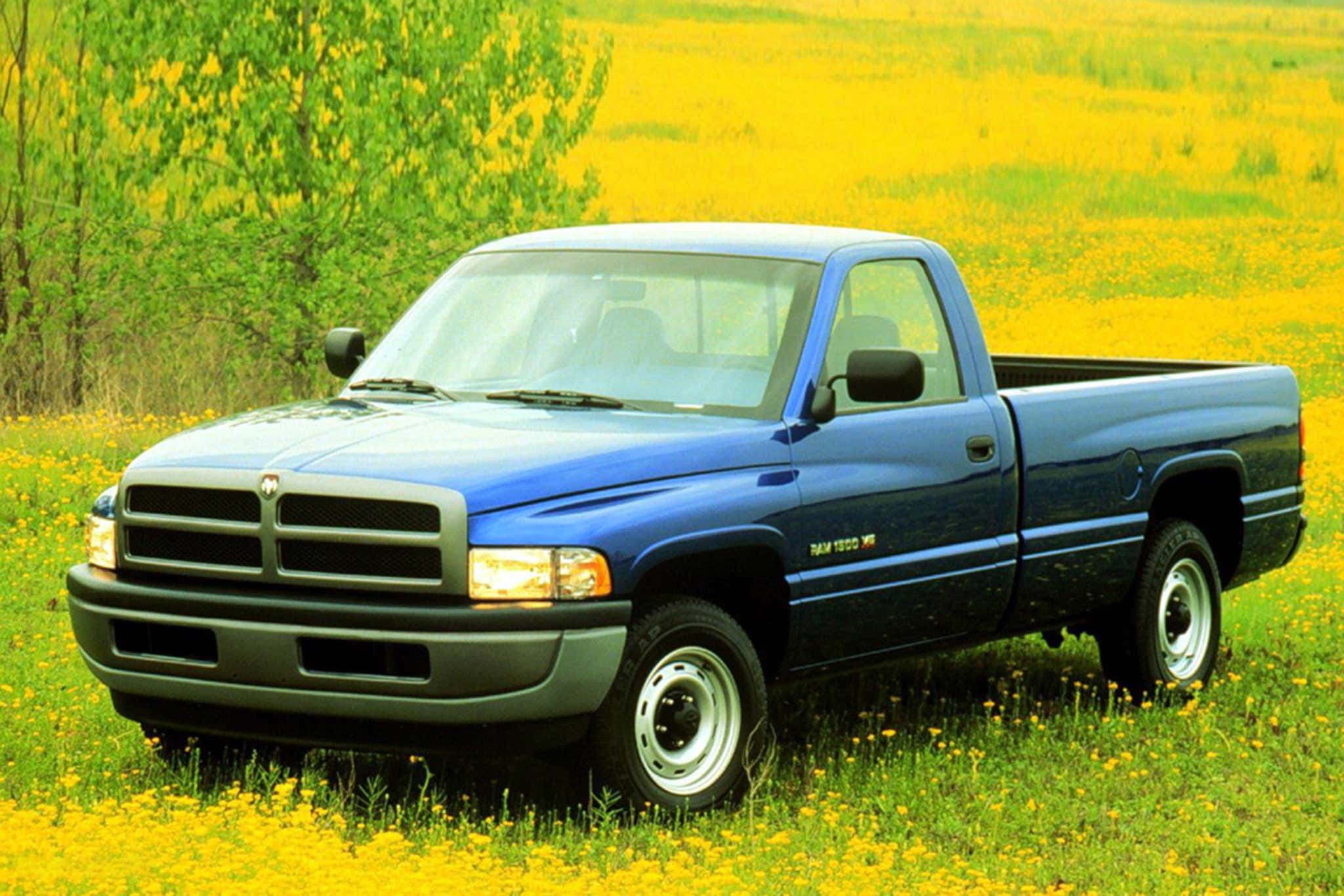 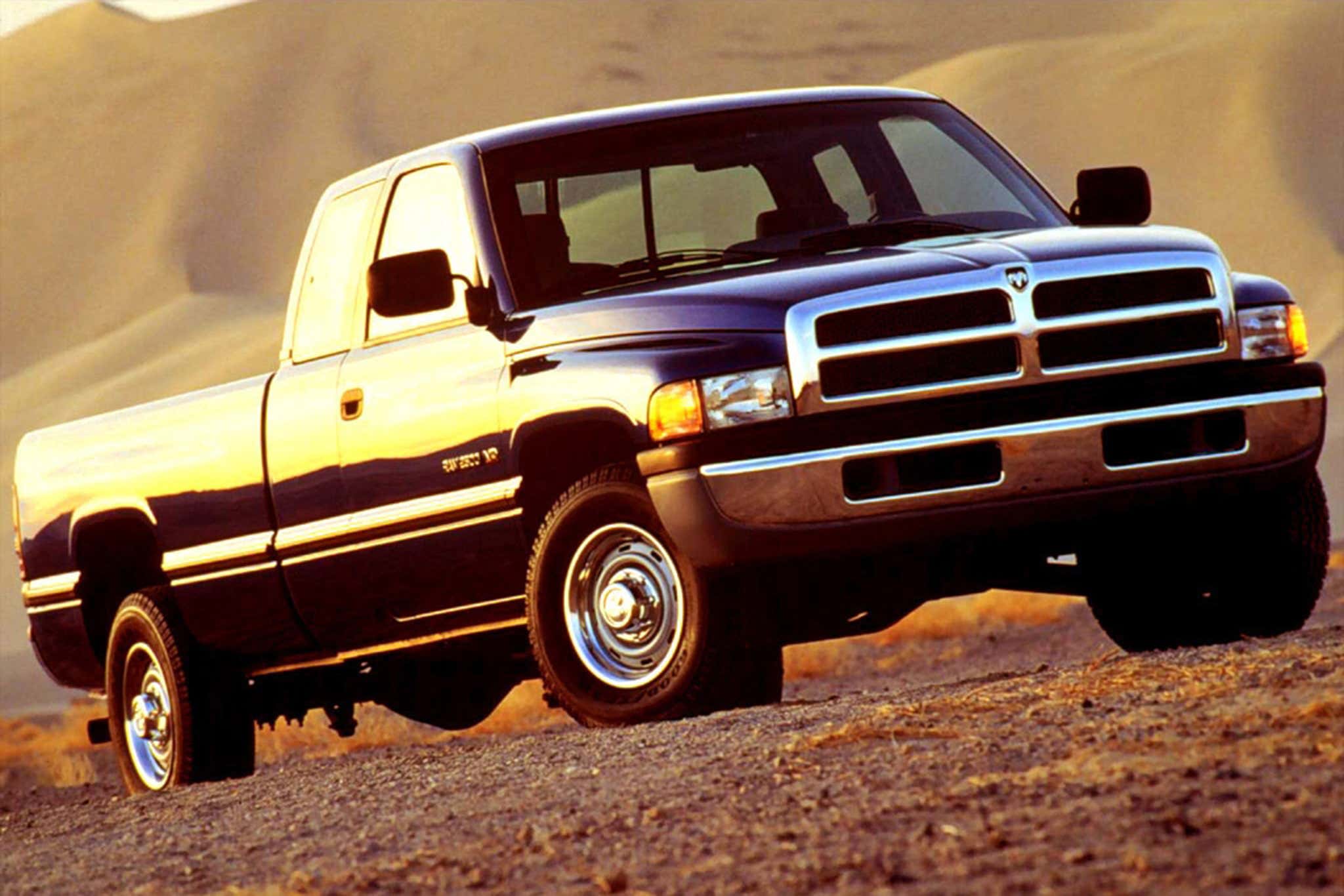 Rather than simply try to make a “better” Dodge pickup, Chrysler took the much more radical step of throwing away its previous template and completely redefining what a “Dodge pickup” actually was. That’s not just standard marketing hyperbole, either, because when the 1994 Dodge Ram arrived it was a shocking break not just with Dodge’s own past but also every other truck on sale at the time.

By now, its backstory has entered the realm of canonical legend: Executives Bob Lutz, Francois Castaing, and designer Philip E. Payne walked away from an uninspired concept for the new Ram that was supposed to be an evolution of its squared-off 1980s predecessor. Instead, the team came up with the ’94 model’s extroverted big-rig styling that revolutionized the look and attitude of pickups in ways that are still being felt today. Throw in a range of powerplants that included a new gasser V10 to compliment existing Cummins turbodiesel options, and suddenly Dodge was back in the game with a large, feature-filled, and unique truck that saw its sales more than quadruple almost overnight.

What does any of this have to do with the Alpha-T concept? Quite simply, in the early 2000s, Nissan was facing almost exactly the same market-entry inflection point. The only difference was this time the company had the benefit of not just a completely clean slate design-wise, but also the stunning example of what had been achieved by the third-generation Ram. 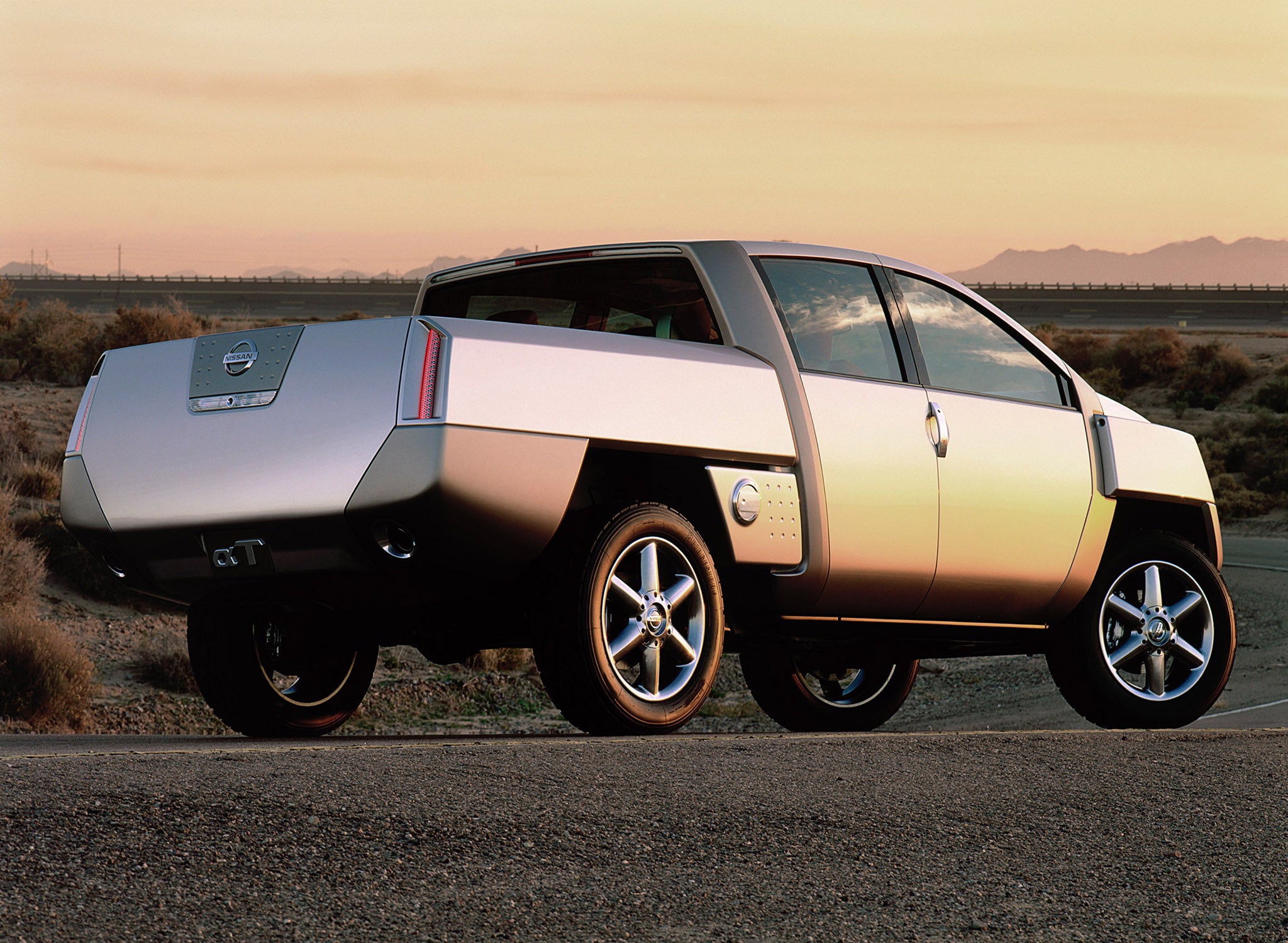 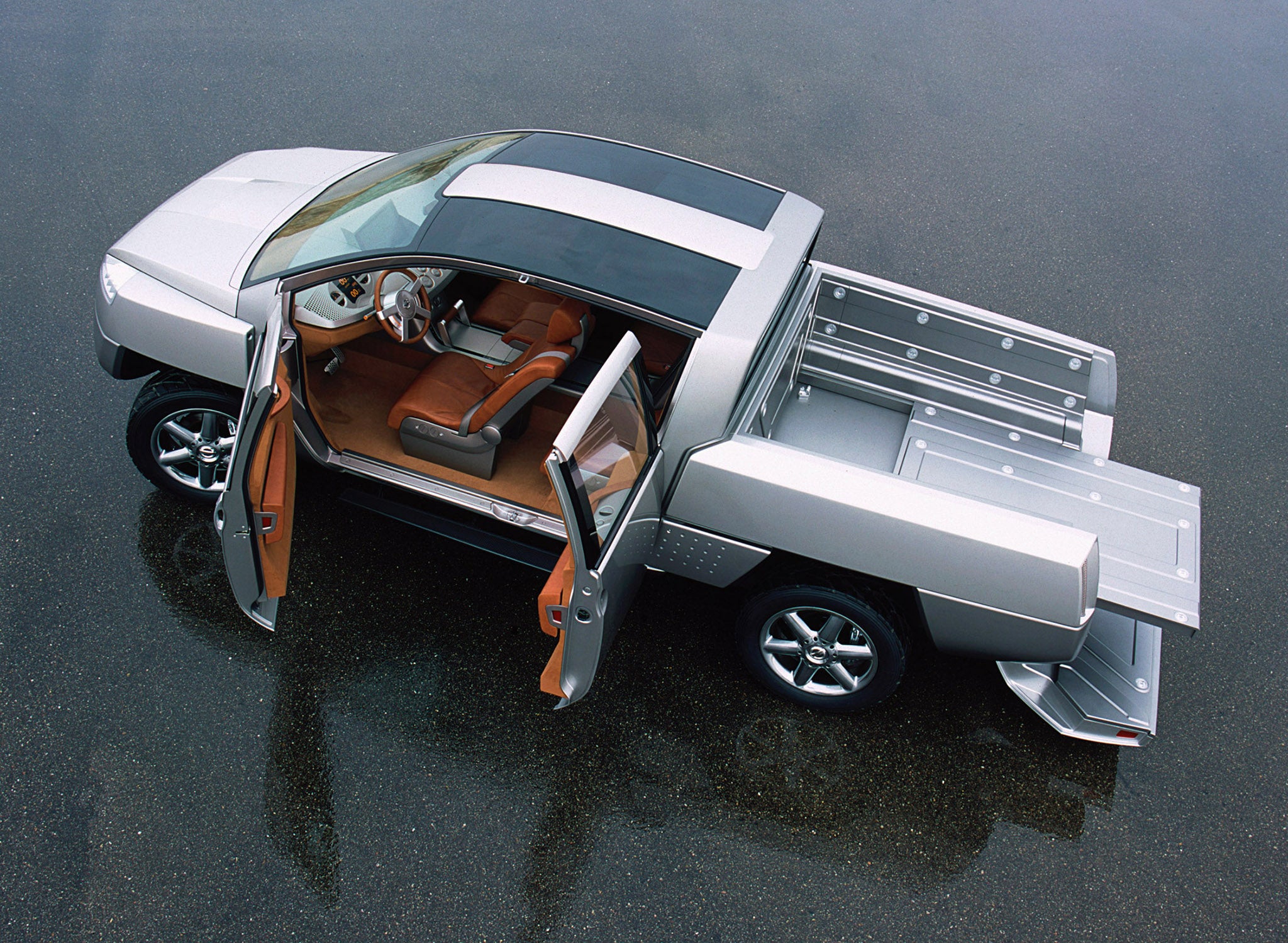 Seen through this lens, the Nissan Alpha-T looks much more like a production possibility than a flight of fancy. It is exactly the type of design that would have shaken the full-size pickup segment with the same fervor as Dodge’s Ram gambit, presenting buyers with a truck that walked on the wild side when it came to styling while introducing useful, class-unique features like a tailgate that could fold to the ground (and included a step for easy cargo box access), an integrated toolbox, a roll-down rear window, and a power slide-out bed that extended for improved loading.

There’s certainly nothing about the concept’s tall fender cutouts, flat-faced grille, or suicide-door cabin that would have been impossible to build in a cost-effective manner. Likewise, remove the full-length center console from the equation, and tilt the dash a smidgen more upright, and even the Alpha-T’s interior is acceptable by the standards of the time. It even stretches over the same F-Alpha chassis that eventually underpinned the Titan that followed. 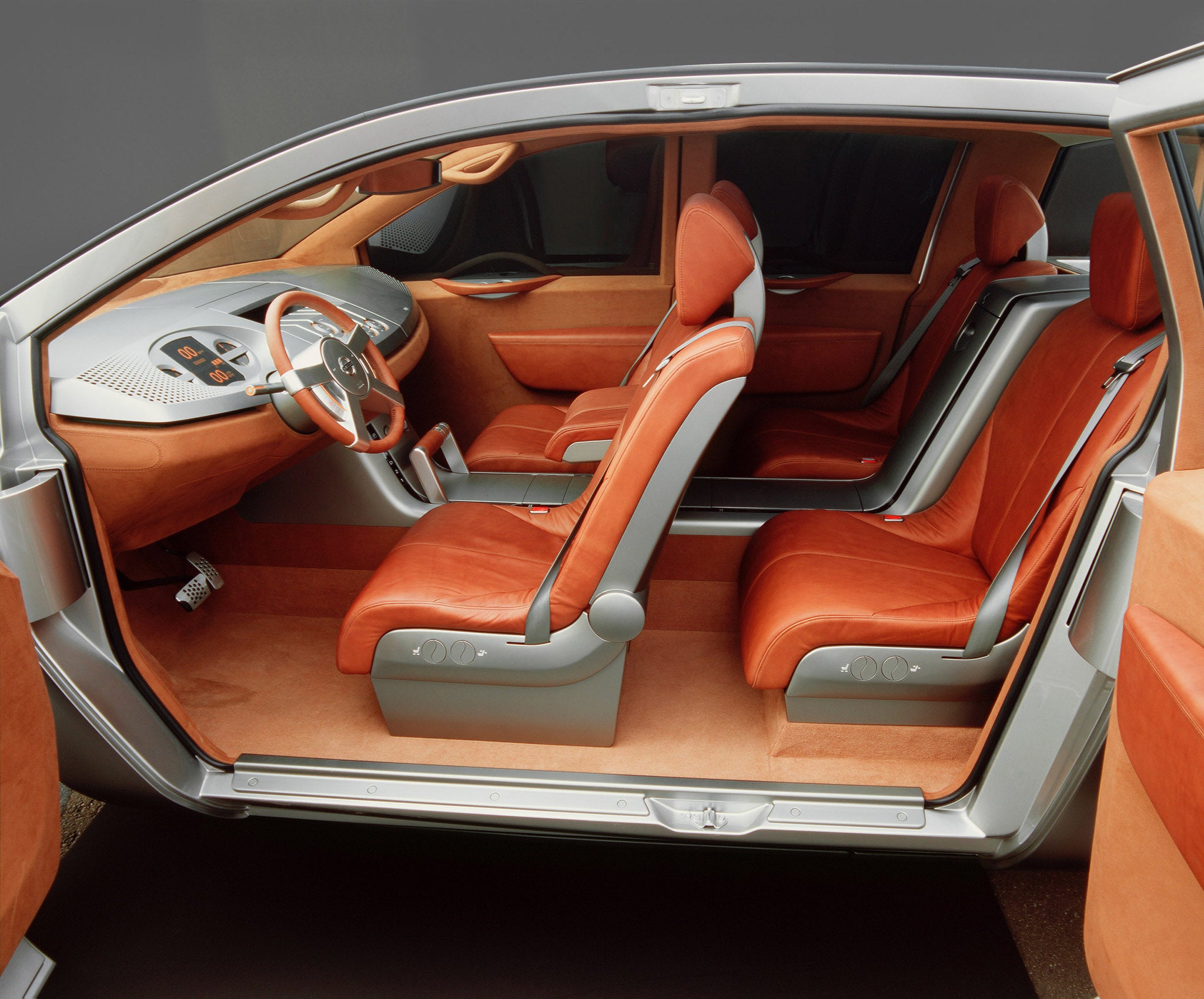 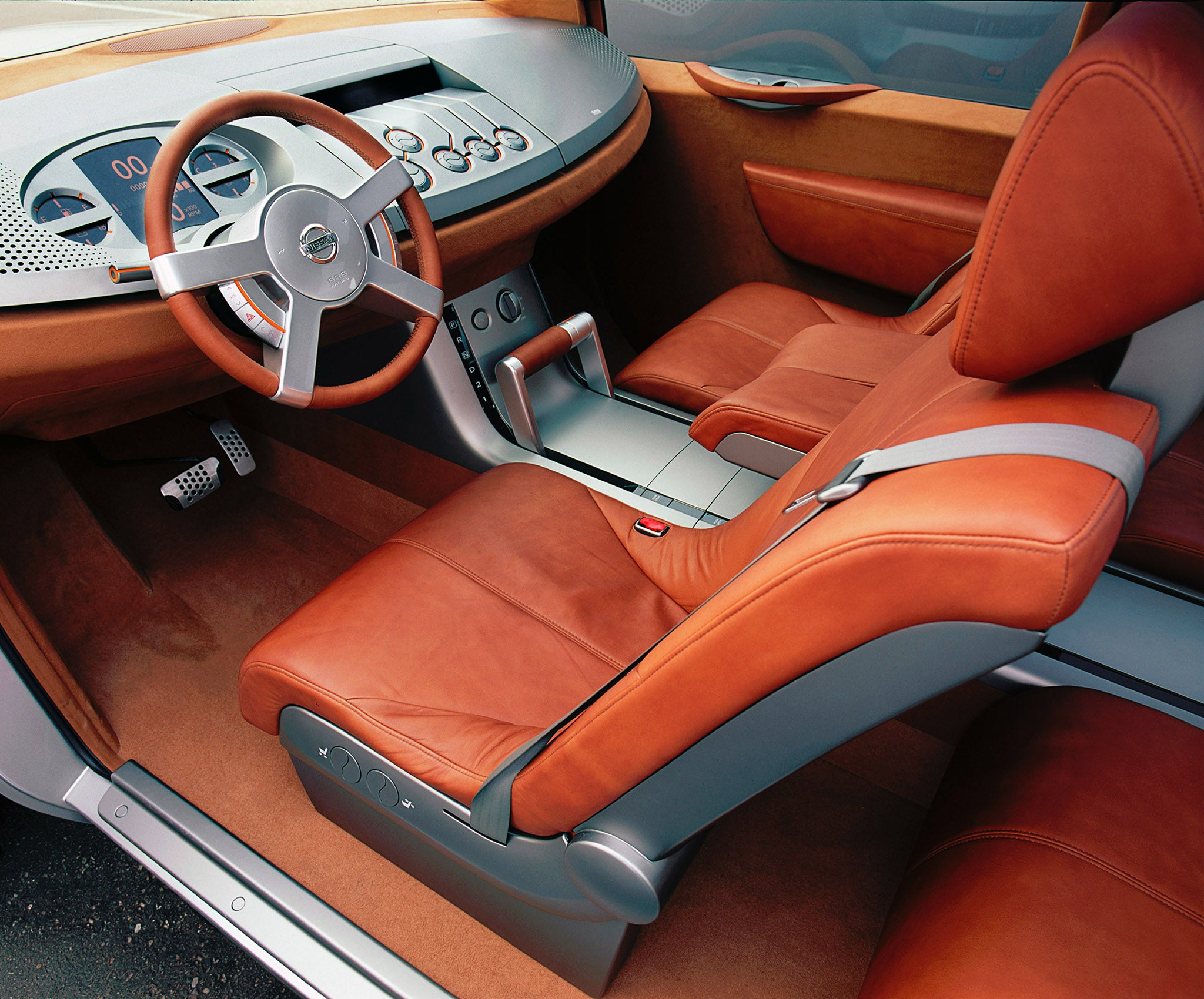 There’s something else that’s important to consider about the era in which Nissan’s concept truck was designed. This was a time when the outlandish and the unusual were regularly making their way to showrooms by way of the retro design craze that took over mainstream automotive design for a near-15 year period that began in the late-1990s with the Volkswagen New Beetle. If vehicles like the Chrysler PT Cruiser and the Ford Thunderbird could find acceptance, then it’s not a stretch to think the Alpha T could’ve made it.

Nissan was no doubt well aware of the impact that the 1994 Dodge Ram had on the pickup market, and it’s entirely possible that it had taken the pioneering model into account when reaching for the stars with the Alpha-T concept. The company didn’t merely decide to take a swing at full-size trucks on a whim, as its own market research indicated what the revised Ram had easily proven: Nearly 40 percent of pickup owners were perfectly willing to switch brands at any given time if presented with a more appealing option.

Despite the example provided by the past, what Nissan couldn’t have predicted was how the future of the conservative choice it did end up making would eventually play out. Not every automaker has a Lutz at the helm willing to gamble a billion dollars on a decision that flies in the face of convention; ultimately, that’s what sealed the Titan’s fate. The first-generation Nissan Titan’s play-it-safe approach no doubt appeased bean counters and corporate strategists, but taking a completely outside the status quo shot like the Alpha-T was the brand’s only real chance at success in the unforgiving full-size market. Essentially, that fear of failure became a self-fulfilling prophecy. 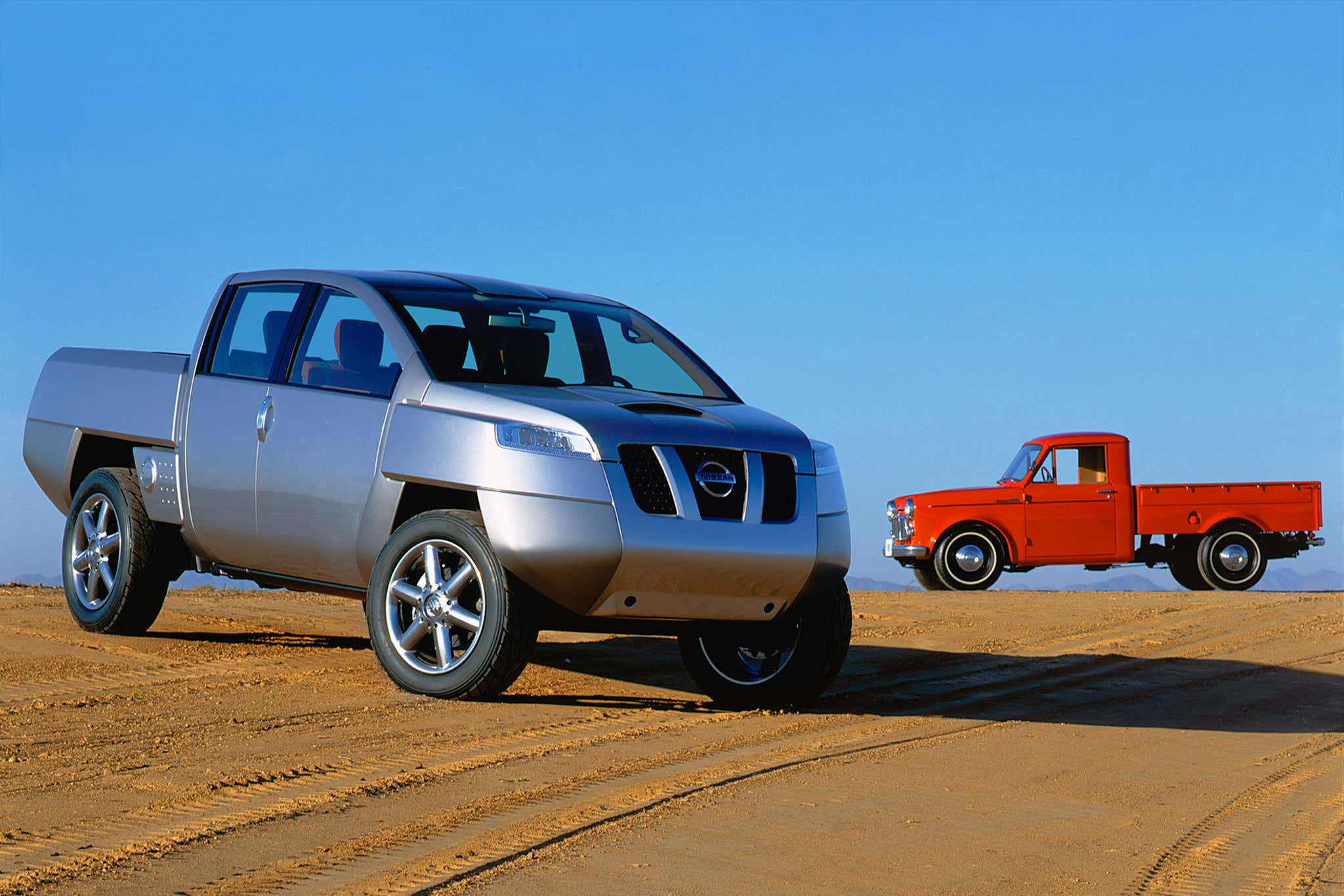 Does saying all this mean being bold will work out for the actual Cybertruck? There are many, many reasons why that’s a separate and much different conversation, but it is true that it’s captivated people (for better and for worse) in ways a conventional truck probably would not.

From a modern perspective, the Alpha-T’s shape is less polarizing and more prescriptive, in some ways previewing the enormity of proportion that has come to dominate full-size designs. It’s familiar, but also striking and impossible to ignore. Paired with the brand’s excellent 5.6-liter, 32-valve V8 engine, and gifted with at least one of the concept’s innovative cargo features, a production Alpha-T may have been the haymaker cocked and ready to floor curious pickup owners in a way that the 2004 Titan simply could not. As it stands, the Alpha-T should go down in history as a game-changing hand that Nissan simply never played.