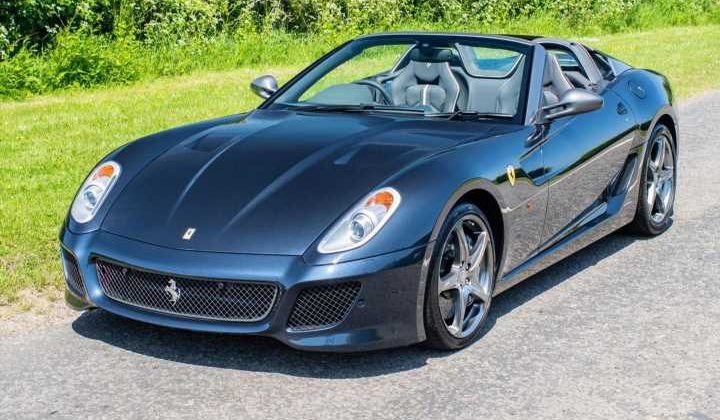 The V12 Ferrari roadsters don't come along that often; they're rather special when they do

Trust Ferrari to outdo one 800hp-plus supercar with another in the space of a couple of months. The 296 GTB is hogging the headlines at the moment, and quite rightly so, its combination of electrified, 830hp V6 and the latest in Ferrari chassis technology promising a great deal. But its debut came six weeks after the 812 Competizione was officially revealed, and that already exciting enough. What with, you know, the 9,500rpm V12 and all.

Further amplifying the excitement was the announcement of a Competizione Aperta alongside the hardtop. So in fact that’s three cars launched by Ferrari this year with 830hp. And they say supercars aren’t what they used to be. The Competizione A (as it will be known) is especially intriguing, in fact, joining an illustrious club of V12 Ferrari roadsters – and resurrecting the breed in fact.

Because we know that 575 Super America followed 550 Barchetta, but for the 812’s predecessor – the f12 – the only drop-top cars were the F60 America and an assortment of one-offs. The F60, as you might have guessed, was only for North America, marking 60 years of Ferrari sales there. And just 10 were made. Therefore, to get back to a drop-top V12 in the spirit of those old ones – and not dissimilar to the Competizione in fact – the clock needs to be turned back to the 599 SA Aperta.

Built to commemorate 80 years of Pininfarina, the Aperta (SA for Sergio and Andrea Pininfarina) was ostensibly a roofless 599 GTB Fiorano in the mould of the 550- and 575-based cars. But that was only half the story. Because to make the 80 cars extra special, the SA featured the upgraded engine and gearbox from the 599 GTO. So that meant 670hp at 8,250rpm, 120-millisecond downshifts and a 202mph top speed. Not quite Competizione numbers, but then 10 years is an awfully long time in Maranello – this SA is only a decade newer than a 550 Barchetta. And almost 700hp ought to be enough for most.

Furthermore, this particular Blu Scuro SA Aperta is even more notable than most. It’s one of just seven UK-allocated cars, surely making it one of the rarest right-hand drive Ferraris ever. It also comes with the carbon hard top, which the dealer believes just two of the cars that came here were fitted with. There are super rare Ferraris, and then there’s this Aperta.

Naturally, it looks epic. Being so seldom seen only increases the drama of a 599 roadster; it’s hard not to continue gawping at new angles and details. Features specific to this one include Grigio roof panels and mirrors, Charcoal leather with white piping and blue seatbelts, a white rev counter, parking sensors at both ends (handy) and the GTO front bumper. Known to the selling dealer from new, it’s Classiche Certified and described as “exceptional”. Not hard to see why.

The Aperta is also for sale at £1,449,990 after 4,000 miles. Which, when an almost just as awesome 599 GTO might cost a million pounds less, might look a lot. But these Ferrari roadsters operate in their own little price universe, owing to their spectacular rarity. And, you would have to imagine, unrivalled driving experience – the Ferrari V12 is exhilarating enough with the roof in place. It’s hard to think of a more intoxicating car to enjoy the odd sunny day here and there than with than the Aperta. More than 800hp is just showing off, anyway…