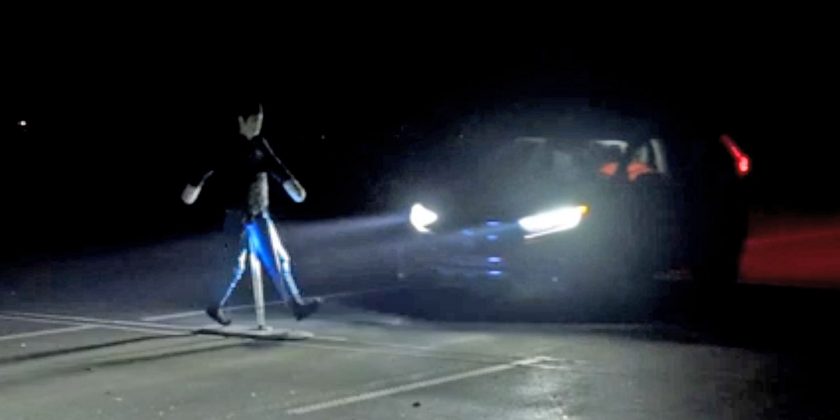 The Insurance Institute for Highway Safety announced in January that it will start rating advanced driver assistance systems like Tesla’s Autopilot and Cadillac’s Super Cruise. Before assigning a grade to each automaker’s offering, though, the group has been testing the effectiveness of various automatic emergency braking systems. We’re talking specifically about equipment that can detect pedestrians and stop the car independently of driver input.

Researchers at IIHS found that, yes, these systems reduce the number of collisions involving pedestrians, but only when there’s adequate lighting. When things get dark, the group discovered that these systems equipped to the eight small SUVs they tested made “no difference in crash risk.”

IIHS Vice President of Research Jessica Cicchino is calling these findings “the first real-world study of pedestrian AEB to cover a broad range of manufacturers,” and notes that the data the organization has gathered “proves the technology is eliminating crashes.” There’s more to it, though. “Unfortunately, it also shows these systems are much less effective in the dark.”

The test vehicles were all small SUVs built between 2019 and 2022, and they came from eight different manufacturers. The best nighttime performers were the Honda C-HR and Ford Bronco Sport, which both use a combination of radar and cameras to detect pedestrians. Other vehicles equipped with similar hardware didn’t perform as well, though. The Honda CR-V, Volvo XC40, and Hyundai Venue achieved similar results to cars with camera-only systems, like the Subaru Forester and Chevy Trailblazer.

As for the lone vehicle with radar-only detection, the Volkswagen Taos, it “achieved essentially the same results in the dark, since radar does not depend on light. However, it was also the worst performer in the daytime test.”

Cicchino notes that “three-quarters” of fatal pedestrian crashes happen at night, which makes these results even more unsettling. Systems meant to prevent accidents when human drivers are most ineffective aren’t working when they matter most. Even worse is the fact that the IIHS found that no one technology was really the kicker when it came to preventing these sorts of incidents, as noted above. A non-light-dependent technology like radar might be what’s best in theory, but in practice, an automaker’s entire system has to be taken into account. David Aylor, manager of active safety testing at IIHS, said, “Some systems worked much better than others in the dark, but there was no single type of technology that got better results.”

Just the same, having great headlights doesn’t seem to help these systems much, either. “The two worst performers in the low-beam test, the CR-V and XC40, both had good-rated headlights,” the study reads. “The research tests did not show a clear association between good headlights and stellar nighttime scores.”

The group states that, while these results may initially be disappointing, it expects improvement to come soon. It says it’s developing a nighttime-specific testing scheme and that results of those experiments will arrive “later this year.” The IIHS also makes it clear that, during the day, these systems yield real results, citing a “27 percent reduction” in overall collisions with pedestrians and a “34 percent reduction on roads with 30-35 mph limits.” All of this tech in new cars clearly does prevent accidents, then. But with many AEB systems being relatively young in terms of development, there are clearly still improvements to be made.