Ever wondered how you’re able to slow a two-tonne car with just your big toe? You’ve a former land speed record holder to thank 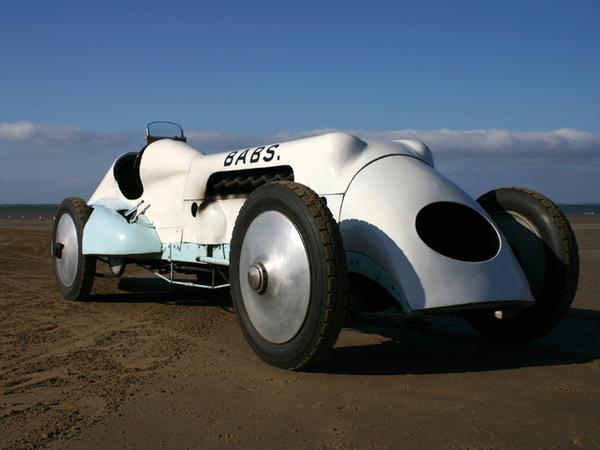 John Godfrey Parry-Thomas was, without a doubt, a talented engineer – and one latterly obsessed with speed. After studying electrical engineering in London in 1902, the Welshman embarked on a wide and varied career – including working on rail and road vehicles, for which he developed the continuously variable ‘Thomas transmission’.

Parry-Thomas then established his own business in 1907 to further the development of his advanced electro-mechanical transmission, which was trialled in trains and road vehicles – including a Leyland Motors bus. Very quickly, however, the requirements of the project outgrew the company’s small workshop. Parry-Thomas, drawing on his association with Leyland, managed to borrow some space in the larger company’s facilities.

Alas, it soon became clear that the Thomas transmission was too complicated and expensive. As was the case with many innovative drivetrain systems of the era, it was also being outstripped by rapidly advancing diesel and petrol engines – and the company was soon wound up.

Leyland, not one to let a clearly talented and motivated man go to waste, promptly appointed him chief engineer. The outbreak of World War I ceased any automotive-related activities, though, and his efforts were directed towards tank design and the development of aero engines – including an existing 18-cylinder project and his own eight-cylinder creation. 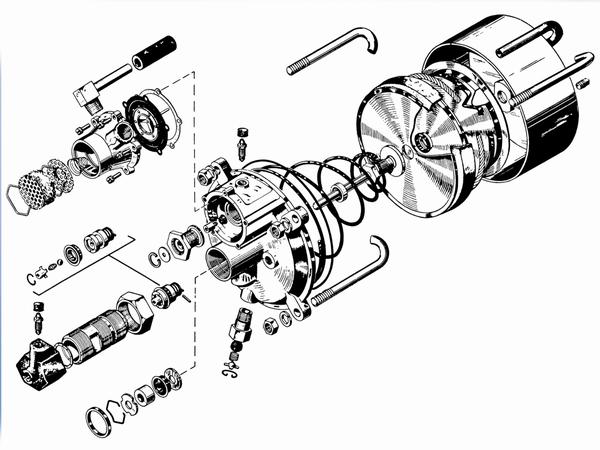 The water-cooled ‘X-8’ aero engine proposed by Parry-Thomas, unsurprisingly, bristled with innovative ideas. Its cylinders were paired and arranged in a double-row X configuration, in order to minimise the frontal area and reduce drag. The engine also benefited from four valves per cylinder, with leaf-style valve springs, operated by overhead cams and rockers – and the cams themselves were driven by shafts and bevel gears.

In order to keep the weight down, which was critical for aero engines, it used an aluminium crankcase and cylinder assembly. It also had a hollow crank, through which oil was pumped to the bearings – and running through the crank was a water-cooled pipe, which kept the oil temperature at the ideal level. All in, the 16.7-litre engine was claimed to weigh around 250kg and was designed to produce around 400hp; by contrast the Liberty ‘L-12’ V12 was among the most powerful aero engines of the day and produced around 400hp but weighed almost 400kg.

Unfortunately, Parry-Thomas seemingly didn’t have the required time to develop his advanced engine properly – no doubt the end of the war drawing close played its part in the development timeline – and mechanical problems were rife. One full-throttle trial, made after the war in April 1919, resulted in the engine blowing itself to pieces on the test stand. Like the engine itself, the project came to a grinding halt.

Not all of the innovative engineering contained within would go to waste, though. With the war over, Leyland returned to its commercial vehicle roots – the designs of which Parry-Thomas assisted with. However, the company was seemingly also interested in branching out into luxury cars in an effort to capitalise on some of the success that Rolls-Royce was enjoying. 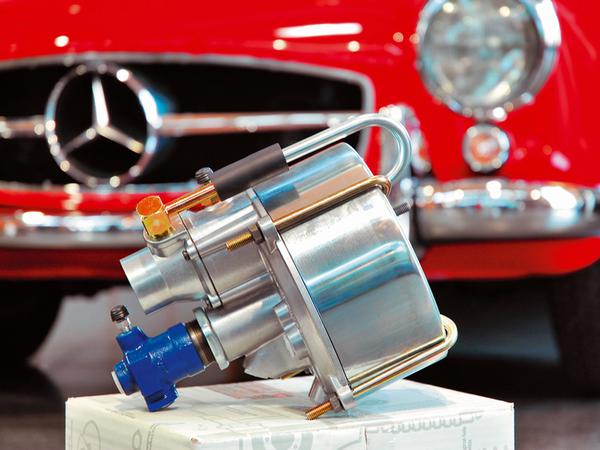 Parry-Thomas was unleashed on the project and, aided by esteemed automotive engineer Reid Railton, set about designing the car that would become known as the Leyland Eight. Reportedly, he aimed to produce a ‘perfect’ vehicle; consequently, the Eight featured all manner of technical marvels.

For starters, the vast luxury car was powered by a straight-eight engine designed by Parry-Thomas. Into this he poured much of his early aero engine experience; it had a single overhead cam, spun by a quiet triple-eccentric drive off the back of the crank, hemispherical combustion chambers, twin Zenith carburettors and a distributor and coil-based ignition system – rather than a trouble-prone magneto. Interestingly, the engine also featured an assembly that caused the opening valve to rock a lever which would pull the opposing closed valve shut more tightly, helping seal the combustion chamber.

Other highlights included leaf-sprung suspension, aided by torsion bars at the rear, while both front and rear suspension set-ups featured components designed to grant an anti-roll effect. Parry-Thomas did much to ensure the vehicle was easy to drive, too. The steering ran just two turns from lock to lock, while the starter motor could not be engaged if the vehicle was in one of the forward gears. All in, there was much forward thinking on display.

Stopping such a heavy, powerful car would no doubt prove problematic – but Parry-Thomas had a solution for that as well. At the time, mechanical brake servos were not uncommon. These systems featured a drive off the gearbox to which what was effectively a clutch was attached. When the driver pressed the brake pedal, the clutch would be gradually engaged. The force generated would then be transmitted to the hydraulic or mechanical braking system by linkages, boosting the braking action. 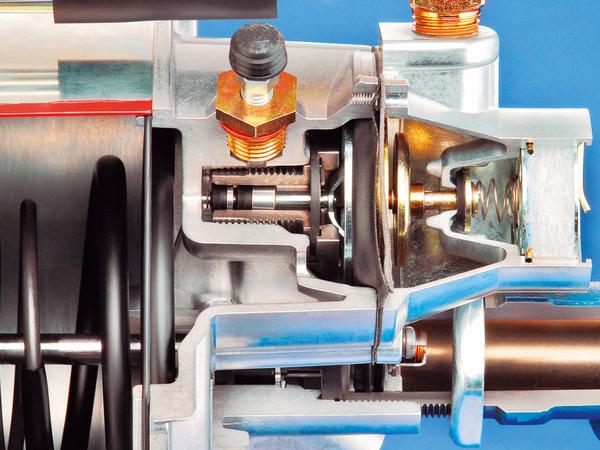 The reduced pedal effort and potentially shorter stopping distances offered by these systems – which were introduced in 1919 by Hispano-Suiza – would make the cars in question much easier to drive. However, reports state that Parry-Thomas couldn’t use this system. Predictably, he then set about engineering his own solution.

In the Leyland, which only had drum brakes on the rear axle – although front drums were planned for later iterations – much use was made of the engine’s vacuum. It was already being used to control the speed of the cooling fan and to isolate the ignition circuit when the engine shut down, so Parry-Thomas extended its use to assisting the brakes – by inventing what would later be recognised as a vacuum servo.

The ‘Clutch and Brake Control on Road Vehicles’ patent, submitted by Parry-Thomas on August 5th 1920, describes his use of the engine’s vacuum to allow ‘power operation’ of the braking system. The vacuum generated by the engine would be tapped off and used to effectively lighten the brake pedal, easing the actuation of the braking system and amplifying the driver’s inputs; road tests claimed it was effective but that it was possible for the enthusiastic driver to deplete the vacuum more quickly than it could sometimes be generated. Even in those situations, mind, the brakes would continue to function – albeit in unassisted form.

This cutting-edge technology and luxury commanded a serious premium. When the Eight was unveiled in 1920 at the London Motor Show, it had a list price of £2,500. In today’s money, that would be around £123,000. Its cost and complexity resulted in fewer than 20 being made, quickly consigning the Eight to the history books. 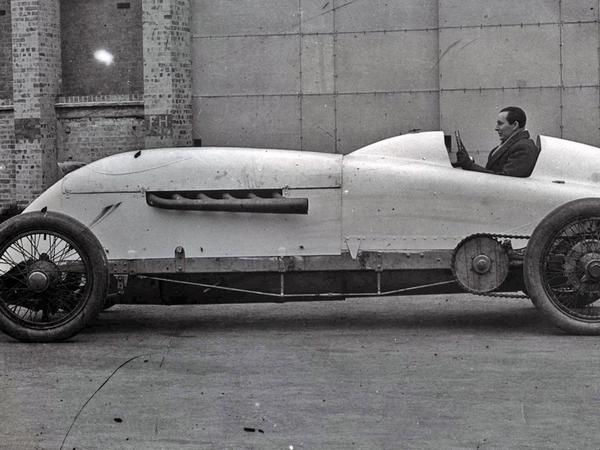 Similar vacuum-assisted systems would soon follow; Pierce-Arrow introduced a vacuum booster in 1924, which was claimed to have been developed by engineer Victor Kliesrath and racer Caleb Bragg. The use of vacuum-assisted systems was more prominent in commercial applications, though, where the heavier weight and larger brakes proved more problematic – and companies such as Sentinel, B-K Brake Booster, Marelli Magnetos and Westinghouse produced vacuum systems from the mid-twenties onwards.

More prominently, Parry-Thomas is rumoured to have sold the rights to his design to Belgian engineer Albert Dewandre. Dewandre then patented a matching system in 1924, which went on to be marketed by Bosch and the Clayton-Dewandre Company of Lincoln. Both focused initially on commercial applications in the late 1920s but Bosch, in particular, segued into vacuum servo brakes for cars in 1928 – which were used, coincidentally, on a Pierce-Arrow. As a result, the ‘Dewandre’ vacuum servo became one of the most documented examples of its type.

In any case, the systems were effective. Four-wheel brakes were becoming commonplace but the physical effort required to operate them effectively was significant. This, coupled with ever-increasing power and speed, meant stopping distances were becoming a real issue. In commercial applications, for example, Bosch claimed that the vacuum assistance could cut braking distances by a third – by easing and amplifying the driver’s inputs, resulting in stronger, quicker application of the brakes.

These advanced aids would take some time to rise to prominence in automotive applications; as the market expanded, most cars remained relatively light and inexpensive – and there wasn’t much demand or necessity for assistance. As speeds and weights began to increase substantially during the 1950s and 1960s, however, vacuum servos began to become far more common – and remain in use in countless applications today. 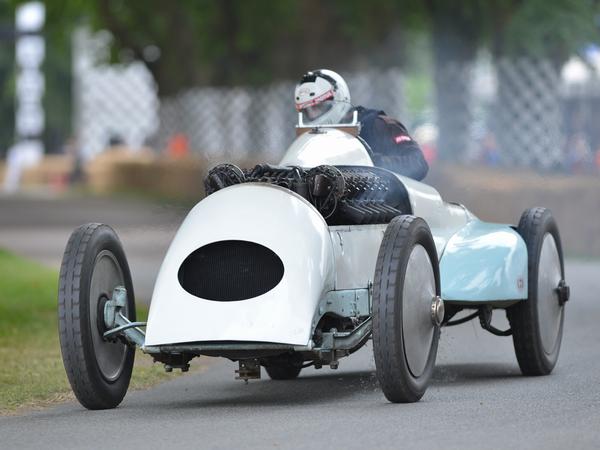 And Parry-Thomas? Somewhat ironically, he hadn’t even learnt to drive until 1916 – and only had a little runabout afterwards. Once he got behind the wheel of the powerful Leyland, however, he quickly developed a taste for high-speed antics. Each was tested to 100mph by Parry-Thomas, prior to delivery, and top speed would soon become his obsession.

He then began to race an Eight and left Leyland in 1922 to pursue his motorsports career. Parry-Thomas won numerous events in the same year and began setting records, too – and he soon concluded that these gained more headlines and drew more attention than motorsport victories.

Ultimately, Parry-Thomas would buy a 450hp Liberty L-12-engined special which he would dub ‘Babs’ – the name of a friend’s daughter. He would set a plethora of land speed records in this car, including establishing a new record of 171mph in 1926. Unfortunately, he would also meet his end in Babs. On 3 March, 1927, a mechanical failure – thought to be a wheel breaking up – caused the car to roll, killing Parry-Thomas.

He was buried in Byfleet, Surrey, while Babs was buried at the scene of the accident on Pendine Sands. It would later be excavated in 1967 and restored, as a tribute to the talented, innovative engineer who raced it.