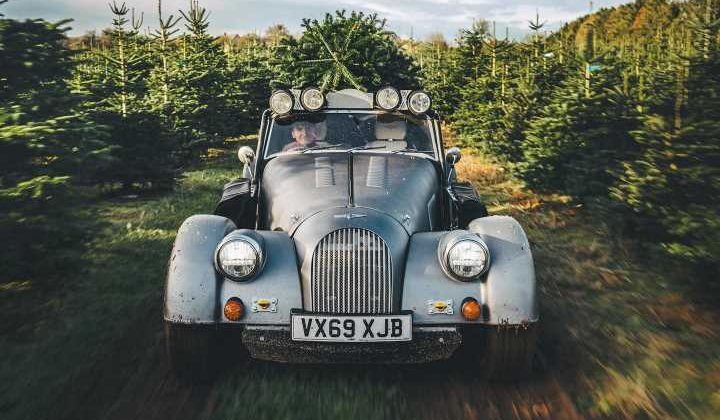 Who d'you send for the Christmas tree? The 19-year-old sheet metal apprentice, obviously…

In a very serious world, the Morgan Plus Four CX-T has proved a welcome hit of four-wheeled joy. Even if you aren’t that into Morgans, overlanding or very limited-run special editions, it’s hard not to raise a smile when presented with the CX-T. It just looks like fun – and the drive certainly delivers on that promise.

With Christmas a mere 10 days away, Morgan has indulged itself. ‘A very muddy Morgan Christmas’ features the prototype used for the media drives back in October, which itself was once a standard Plus Four development car – hence the rather incongruous cream leather in an off-road Morgan. The premise is as you might expect for this kind of film – inappropriate sports car transports Christmas tree at inappropriate speed – but it no less entertaining for it. Nobody complains about the same old mince pies at this time of year, do they? The silly car video is certainly a Christmas tradition we can get behind.

Morgan is aware new ground isn’t exactly being broken here – “yes, we know, it’s another Christmas video with a tree on the roof of a sports car” reads the description – but a very nice job has been done nonetheless. And it shows off how useful the CX-T can be, with the straps intended for expedition supplies doing a great job of keeping the tree in place.

Plus, of course, a very muddy Morgan Christmas exhibits just good the CX-T is when the going gets tough, frolicking around a muddy field like it was never meant to do anything else. It’s nothing that couldn’t be tackled by a Cayenne – the Morgan remains rear-wheel drive, don’t forget – but few cars look as good with mud on the windows as a Morgan Plus Four. Which is probably why all eight were snapped up so fast. Keep watching right until the end, too, for another peek at the GTR – Morgan’s 2022 looks set to be as fun as its ’21.