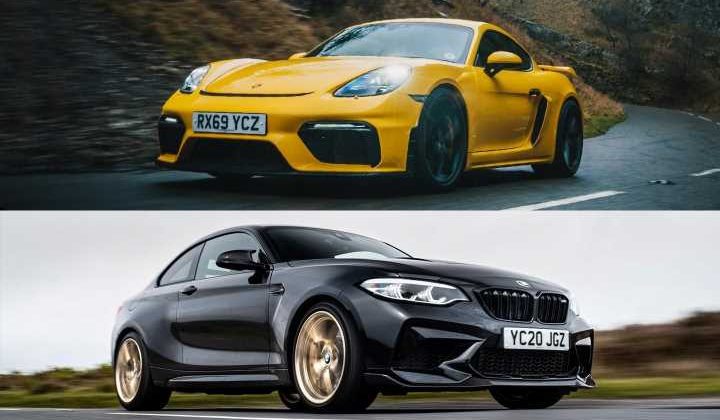 Rarely has the difference seemed so stark. One is a sports car in the truest sense, designed from a clean sheet of paper specifically for that purpose. The other is a sports car in a more free-form way, for beneath its carbon fibre battledress – deeper than its metal bodywork, all the way down in its core – it is, in fact, a very humble machine indeed, derived from a rear-driven family hatchback that you wouldn't look at twice.

Yet they cost the same and offer almost identical performance. Crucially, they also sit upon Michelin Pilot Sport Cup 2 tyres, whose sizes, compounds, construction and tread patterns may vary slightly, but which to all intents and purposes are the same. On a road that shimmered lightly with dew without being wet, one car clawed out of its four Michelins consistent and predictable grip and traction, while the other did not.

And therein lies the difference between a ground-up sports car and a dressed-up one. Give it firm suspension, wider tracks, weightier steering, sticky tyres, aggressive geometry and enough power and you will persuade a family hatchback to behave a lot like a sports car. But your efforts will come undone when the road turns damp. The tyres won't like it and the aggressive geometry will compound matters, so that rather than cling to a slick road surface, that car – or the BMW M2 CS – will slip and slide wildly.

Meanwhile, the true sports car – or the Porsche 718 Cayman GT4 – will hold firm. It was a vivid demonstration of how essential proper weight distribution, a low centre of gravity and the right suspension kinematics really are. I could lean on the Porsche and trust its grip, whereas the BMW made me feel edgy.

But that's just on a damp or wet road. Besides, who's to say iron-clad stability is actually more fun? The purpose of this comparison was to see if the most hardcore small BMW could trouble the most hardcore small Porsche in the raw enjoyment stakes, despite its more everyday underpinnings. It's a thug of a car with a real sense of humour – a giddy court jester to the GT4's strait-laced private secretary. The M2 CS is also desperate to powerslide the way a happy dog is desperate to wags its tail, all of which, in the event, could mean you'll have more fun in the BMW.

Although I've looked very closely and I'm not entirely sure what you're getting for your money. At a fraction over £75,000, the M2 CS is £23,000 more expensive than the already excellent M2 Competition. That seems like a lot for an additional 39hp, some tacked on carbon fibre, a missing armrest and a little more Alcantara trim. To be fair, you do also get adaptive dampers as standard (the first time they've been fitted to any M2), a lower ride height and retuned suspension. But even so, this doesn't have the feel of a comprehensive reengineering exercise.

Certainly it's not the thorough going-over that turns a regular 718 Cayman into a GT4. With the Porsche you get the front suspension off a 911 GT3, a completely new aerodynamics package, a custom rear end, uprated brakes and more besides, which is to say nothing of the 4.0-litre flat-six engine (which admittedly is now shared with the 718 Cayman GTS we've driven previously against the M2). While we're discussing value for money, it should be pointed out that although in terms of list price there is only £460 between these two cars, the typical 718 Cayman GT4 will roll off the showroom floor and onto the road costing rather more than the typical M2 CS, once both are optioned up.

I have always liked the M2's cabin – the seating position, the snug feeling I get, the impressive material and build quality. I also like the usable rear seats and the cavernous boot. The CS-specific seats I could do without, because the standard M2 chairs clamp me more tightly. I wish, too, that the rim of the steering wheel wasn't so fat. It means you steer not with delicate fingertips but with big, clumsy fists.

Even with its adaptive dampers set to their softest setting, the M2 CS rides firmly. It's always busy and taut, but never crashy. Even so and given the money you'd be spending, I would hope for the kind of sophisticated, absorbent damping you find only in the very best performance cars and only from time to time. You get it in some GT Porsches, in certain Lamborghinis and, unexpectedly, in the 2012 Mercedes-AMG C63 Black Series as well. Those cars glide across a bumpy road as though on a pocket of compressed air, soaking up intrusions and levelling out compressions, but while keeping their bodies under firm control. I had anticipated something similar from the M2 CS, but instead found toughness and a lack of composure over bumps.

But the CS does steer and turn-in more incisively than any other M2. On a dry road there is tremendous grip, better body control than other variants but still that curious way of corkscrewing about on its springs (even in the firmer damper modes). I suppose that's where the M2 demonstrates the limitations of a family hatchback platform. It does still slide beautifully, though, with that same languid, progressive manner under power as other M2s. Few cars are as playful as this one. The M Differential behaves so predictably here, particularly compared to that in the bigger (previous generation) M3 and M4, cars that can be horribly snappy under power.

The twin-turbo, six-cylinder engine would be underwhelming if it didn't thump so hard. It sounds only okay and there are no fireworks in the delivery, but there is good response and energy throughout, plus such a tremendous mountain of power and torque to call on that you can send the M2 CS thundering off along the road with just a flex of your big toe. Meanwhile, the manual gearshift (a dual-clutch transmission is optional) has that typical BMW knuckly feel to it, but also a good, mechanical throw and an excellent automatic rev match (which you can banish should you wish).

The M2 CS muscles its way along a road seeming hard and powerful, as many parts hot rod as sport car. Sledgehammer isn't fair, but not too far from the mark. The BMW doesn't really do poise and delicacy, but it does do fun by the bucketload.

More than the Porsche? That really depends on how you get your kicks. You sit much lower in the 718 Cayman GT4, peering out through a narrow windscreen, clutching in your fingers a thin wheel rim. You notice the exceptional matching of control weights and the precision that's shot through every component even while manoeuvring. It's that sort of car – honest and upfront about its intentions from the very beginning.

The steering isn't too heavy in normal driving, nor the clutch pedal. It's an easier car just to operate than the previous Cayman GT4. But it does feel more unyielding than the BMW, its chairs more thinly-padded, road, wind and engine noise flooding the cabin far more vocally. It feels more like a sports car. Like the BMW it rides with a certain firmness that never quite turns uncomfortable, but its suspension does a better job of smothering poor surfaces while keeping the mass of the body in check.

Its steering is more transparent than the BMW's, too. You don't just feel the front axle dart one way or the other in response to an input – you also feel the front tyres press and twist themselves into the road surface; feel the grip beneath you. (Although not as vividly as you do in the previous GT4.) As well as clawing more grip out of its tyres on a damp surface, the lighter, lower Porsche also feels clamped down, keenly tracing the topography of a road rather than going light when it drops away or becoming heavy when it rises back up.

This isn't the sort of car you agitate into a slide just for fun, at least not on the road. Instead, you drive it neatly and with commitment, trusting it implicitly. And while its normally-aspirated engine doesn't hit as hard as the BMW's turbocharged one, once you've wrung the flat-six out to the redline at 8,000rpm, you won't miss any mid-range torque one bit. This most recent GT4 engine mightn't be as tuneful as some other Porsche motors, but it still howls with an energy and response that you just don't get with turbos.

The manual gearshift could well be the best in the business, but it is undermined somewhat by gear ratios so long that second gear puts you into NIP territory and third gear into prison. Still, the 718 Cayman GT4 is such a complete, cohesive whole. It's the poster child for bespoke sports car engineering, for having an engine in the middle, two seats just ahead of them, all the mass between the two axles and positioned as low as possible. It is the £75,000 sports car I would choose to have, though I suspect a part of me would always long for the thuggish brutality – and the sense of the fun – that makes the M2 CS so compelling.