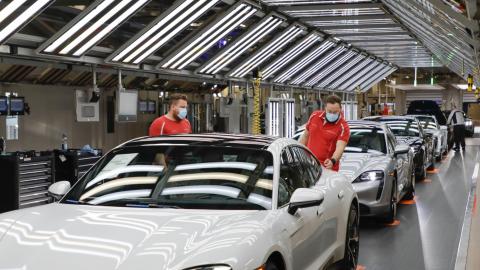 The company is said to have set itself an ambitious goal of achieving 100 per cent carbon neutrality across the entire production chain by 2030.

Porsche has asked all its suppliers to exclusively start using renewable energy while manufacturing components for the brand’s various models. This is said to be part of Porsche’s efforts to reduce CO2 emissions in its supply chain.

According to Porsche, the use of renewable energy will apply to all contracts going forward as well. The company also announced that those unwilling to switch to renewable energy sources will not be considered for future long-term contracts with the brand.

The company is said to have set itself an ambitious goal of achieving 100 per cent carbon neutrality across the entire production chain by 2030. The supply chain operations of the German carmaker are said to be currently responsible for 20 per cent of the brand’s total greenhouse gas emissions.

Apart from asking its suppliers to use renewable energy, Porsche themselves are said to be working on reducing CO2 emissions as well. The German car brand’s larger production sites such as the Zuffenhausen facility in Stuttgart (producing the Taycan) and the Leipzig facility (manufacturing the 911 & 718 models) are already said to be carbon neutral.

Porsche even achieved a new milestone with the world premiere of its Taycan Cross Turismo. The electric sports car became the world’s first vehicle to be carbon neutral across its entire production operation.

The company also announced an additional investment of a billion euros over the next 10 years. This investment is said to be used mostly towards the brand’s decarbonisation measures. Porsche aims to electrify 80 per cent of its entire product line-up by 2030.