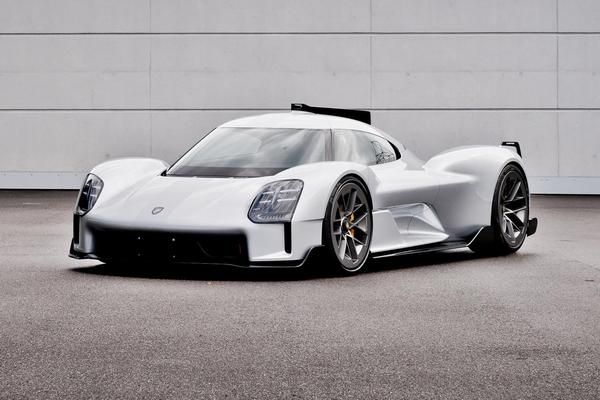 Given the rate of updates in production cars, you'd think designers and engineers have precious little time to consider off-the-wall concepts these days. But it seems some creative minds at Porsche have actually been given plenty of time to work away on new ideas, evidenced by the reveal of a trio of one-off design studies never before shown to the public. All have links to motorsport – and each provides a tantalising glimpse of what might have been if regulations and the bottom line weren't a consideration.

Let’s start with the 919 Street, which does exactly what it says on the tin (or carbon monocoque), in that it’s a road-legal version of Porsche’s marvellous hybrid Le Mans racer. You know, the one that finished first in the 24-hour race three years on the trot from 2015. This isn’t a reskinned version of that machine but rather a clay model. But it’s to scale, so those lines and aero pieces are representative of what might have made production. It’s very pretty.

Were it to ever be made for real, Porsche said the 919 Street would use a road-tuned version of the 919’s bespoke, mid-mounted 2.0-litre V4 engine and front-mounted electric motor. In race specification, the innovative system produces more than 900hp combined – most reckon it was easily nudging 1,000hp in qualifying trim – but thanks to the compact setup and exotic structure, the racer is an 875kg machine. Allowing for a few roadworthy additions in the 919’s transition to Street spec, it suggests a road car would still have been a sub-tonne machine. Quite the achievement for such a heavily electrified model.

The next hidden concept to see the light of day for the first time is dedicated to a much older competition car, but it’s no less awesome. Porsche’s iconic 550-1500 RS Spyder rose to fame when it gave Ferrari a run for its money in the 1954 Carrera Panamericana in Mexico, a 3,000km race that had until then been exclusively dominated by large capacity entrants. But Porsche’s Spyder – known internally as the Type 547 – used an air-cooled 1,500-cc four-cylinder with four overhead camshafts and a power output of 110hpat 7,800 rpm. It finished fourth overall.

The Porsche Vision Spyder unashamedly borrows from the 550-1500 RS’s low, clean lines with a roofless body and simple two-door skin. It’s not clear what a rolling version of the 1:1 clay model would be based on; Porsche said the creation is purely “intended to further develop the design identity of Porsche”. At least we know it’s a mid-engined design including features that the maker reckons could make their way to production – like the carbon roll bar. Porsche is presently lacking an open-roof alternative to those new speedsters from McLaren and Ferrari…

The manufacturer’s other just-revealed, previously secret concept is inspired by its famous Rennsport support van, albeit as a rolling “family-friendly space concept for up to six persons”. Another 1:1 hard model, it would be an all-electric vehicle, with a central driver seating position and floor-mounted batteries. Don’t expect Porsche to be moving into the world of van production anytime soon; this is an example of the manufacturer pushing its designers to adapt the brand's latest visual language into a vehicle type that’s “unknown” to them. We think it works; you can just imagine a GT3 RS on a trailer behind it en route to the circuit.