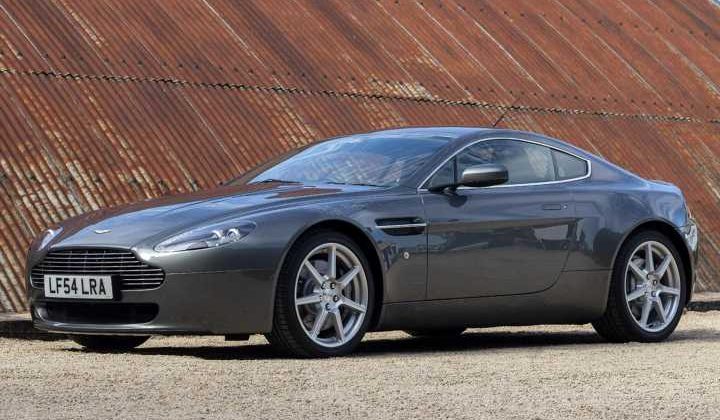 Remember how the original V8 wowed motor show crowds? This is that car!

We’ve all been stopped in our tracks by a car on a motor show stand. Whether it’s the one we’ve made a beeline for having read everything beforehand or a show-stopping surprise, everyone has a fond memory. Perhaps some of you have been lucky enough to buy that captivating car some years later.

It’s easy to imagine jaws hitting the floor when the covers came off the Aston Martin V8 Vantage at Geneva almost 17 years ago. Though it had been previewed at Detroit a couple of years prior, you know how it goes with concepts – there was no way a car that looked quite so good would actually make production. Then an identical Vantage was shown to the world in March 2005, Henrik Fisker and the design team having hit the brief for six. This was the entry point to the range, a V8 sports car to rival the Porsche 911, and the design, if anything, outshone the rest of the Aston line up. Which included the DB9 and V12 Vanquish, don’t forget.

Plenty will be familiar with the V8 Vantage story from 2005, but here’s a piece of the puzzle many won’t know about. It’s the actual concept car from Geneva, star of the stand (and the show) now available for an Aston fan to buy. Its history is nothing if not intriguing: after its promotional duties, including an Australian debut at the Sydney motor show, the Vantage was taken back to Gaydon and left in storage. Seemingly without a chassis number it couldn’t be registered, so it just lay dormant with its ‘AMV8’ show plates for a decade.

Then in came Andy Palmer, and his plan to take Aston public. Space and funds were required, so the prototype was sold, but it wasn’t until 2017 that a chassis number was discovered. Soon after it was road registered, and actually picked up a concours victory with the owners’ club that same year. Now, another half a decade down the line, the earliest known V8 Vantage is for sale. It really is a fascinating specimen, from the ’54’ reg plate that tricks your brain (but is age appropriate) to a stereo that looks like any other – but doesn’t work. Because it was intended for motor shows, and it wasn’t deemed necessary. Or there wasn’t time to finish it…

Regardless, it’s an astonishing car, still just 869 miles old but from a time when Sugababes and Busted were charting. Furthermore, besides the stereo, this is a fully functioning V8 Vantage, with the 380hp 4.3-litre V8 and six-speed manual. You’d probably be more circumspect with use given the historical significance and the fact it’s never seen rain, but this isn’t the kind of motor show car that needs a team to start or runs on a lawnmower engine. To exhibit the production-ready V8 Vantage, Aston Martin had a production-ready V8 Vantage.

As a piece of drivable Aston history, you’d expect a lofty asking price. And while £80k is a long way from what most early V8s cost, it doesn’t seem startling. Perhaps that says more about what some cars are being advertised at right now. It’ll need a new MOT if the next owner does want to drive it, but there’s nothing to suggest that’ll be an issue. Otherwise, the Vantage would surely complement any car collection (and especially an Aston one) just nicely. It wouldn’t even seem like a waste of a car, either – many a happy hour could be spent just gawping at a V8, much as those showgoers will have done back in 2005.