Apple has long been rumored to be working on a car, even before everyone got excited about EVs. According to a new report from Reuters, that vehicle might finally be coming to fruition in 2024.

Reuters reported that the autonomous Apple car will start production in 2024 and will feature “next level” battery technology. The news service cited someone “who has seen Apple’s battery design” as saying it could “radically” reduce battery costs and increase range.

The report doesn’t specify if Apple will build the vehicle itself or look to partners for the actual manufacturing of the EV, but it does say, citing “two people familiar with the effort,” that it’s going to be a personal, mass-market vehicle rather than a robotaxi or commercial vehicle. It also said that the car, as a self-driving vehicle, “might” have lidar sensors and noted that the newly released iPhone 12 Pro and iPad Pro both have Apple-developed lidar sensors in them.

Apple’s car plan, under the code name Project Titan, has been an open secret in the automobile and tech world since its inception in 2014. The tech company snatched up vehicle engineers from Porsche, Tesla, and other automakers, including Alexander Hitzinger, who recently left the company and returned to the VW Group to head its own Project Artemis.

Now it seems the vehicle is back on track and will go into production, if Reuters’ unnamed sources are proved correct. Of course, the date may be pushed to 2025 due to coronavirus delays. Apple is rumored to be reaching out to sensor companies to help it add driver-assistance technology.

As for actual production, Apple was rumored to be speaking to Magna, which already has its own EV platform that it can use to build an electric vehicle for other companies. The result of those talks is unknown. One of Apple’s long-term manufacturing partners, Foxconn, recently unveiled its own plans for an EV platform. 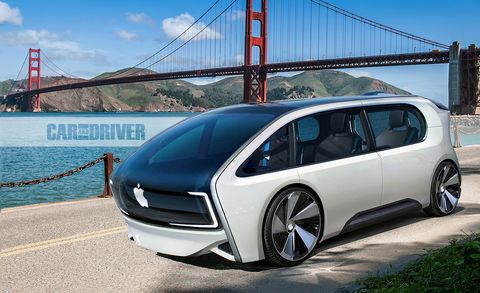 Powering the yet-to-be-announced vehicle will be Apple’s “monocell” design for batteries, according to Reuters. The technology does away with pouches and modules and combines the individual cells in each battery. This could yield more capacity within the same space as a traditional battery-pack layout. The tech company could also be looking at different chemistries for its batteries.

With its ability to wield power in the manufacturing world thanks to the iPhone, Apple could potentially hit the ground running in a way other automotive startups might not be able to accomplish. Still, building cars is hard, and this would be Apple’s first. That’s if the company sticks with this plan. If not, it could be another couple of years of a rumored Apple Car without anything actually rolling down the street.