The Cullinan shows how expensive an SUV can be. It must also set a new precedent for luxury. Does it? 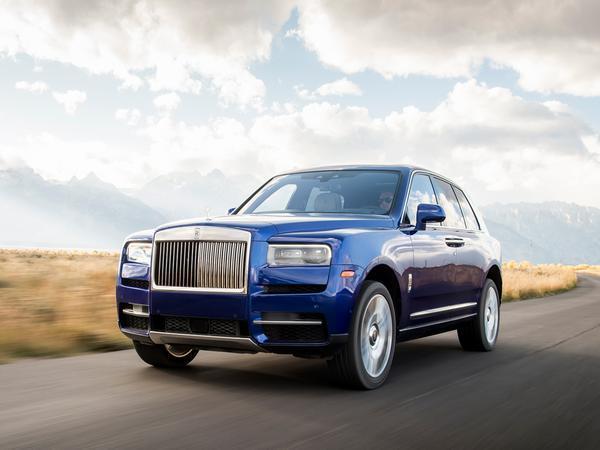 If Rolls-Royce is in the luxury business, rather than the car business, as it sometimes contests: why an SUV? Isn’t it a bit trendy and emerging-segment-ey? Isn’t there a whiff of the spreadsheet about it?

Perhaps, but there are also customers saying they rather like their Rolls-Royce, but would like to use it more often, thanks very much. Y’know, take the family out in it, go skiing in it, go shooting in it. Actually use it daily. What is the point, after all, of having cake if you can’t eat it?

So here we are. The new Rolls-Royce Cullinan, the first Rolls-Royce SUV, its first car with four-wheel drive, if not the first Rolls to be used regularly off-road. It’s an unusual-looking vehicle/striking/a munter, depending on your outlook. Me? I think it feels like some Rolls cues have been grafted onto a body style that doesn’t necessarily need them, but that the same didn’t harm the first-gen Porsche Cayenne or this car’s closest rival, the equally unapologetic Bentley Bentayga. 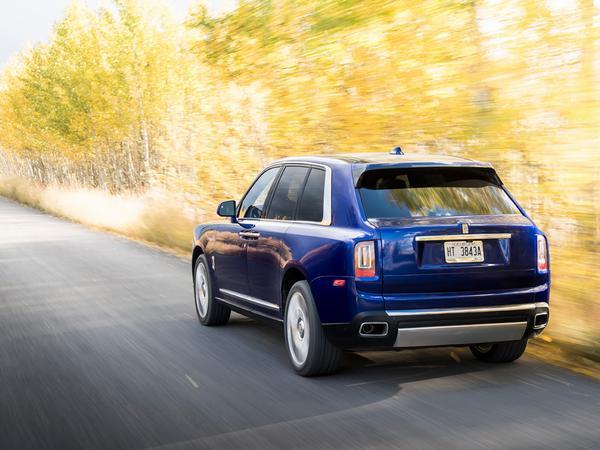 The Cullinan is based on the bespoke-to-Rolls aluminium architecture which made its debut with the Phantom last year. Eventually all Rolls-Royces will be built on this platform. It’s cheaper than a Phantom, at ‘from’ £250,000, but a typical spend is more like £325,000. The Cullinan lifts the lid on how expensive a 4×4 can be.

It has a 6.75-litre V12 petrol engine, twice turbocharged, driving those 22-inch wheels via an eight speed automatic gearbox. There’s air suspension all round, double wishbone at the front and multi-link at the rear, with beefed-up uprights to cope with greater forces and with less friction than a Phantom which, at 5.3m long, this is shorter than. Engineers don’t like it too much if you mention xDrive (BMW being Rolls’ parent company) but the four-wheel drive system is a derivative thereof, also upgraded to cope with the forces created by the car’s considerable torque and weight – 627lb ft from 1,600rpm and, ahem, 2,735kg at the kerb.

The four-wheel drive principle is fundamentally the same, though, so the Cullinan mooches around in predominantly rear-drive fashion most of the time, able to put 100 per cent of its torque to the rear wheels for ultimate efficiency and balance, enabling it to return as much as 18.8mpg – I know! Swoon! But up to 50 per cent of torque can be diverted to the front wheels. 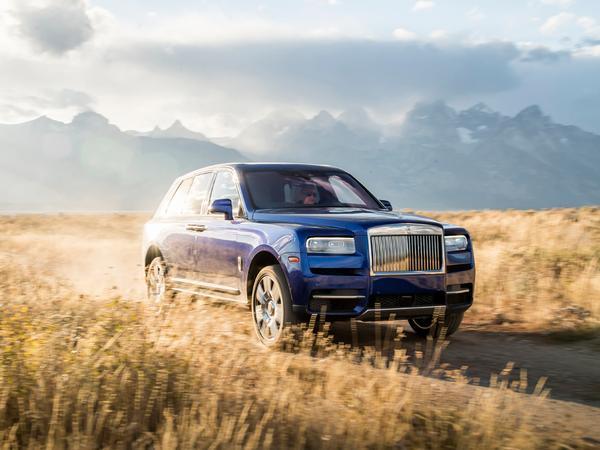 Neither the front nor rear differentials lock, but there is torque vectoring via braking to stop a spinning wheel, while the body, which runs on air suspension as standard, raises 40mm if a one-touch ‘off road’ button is pushed. You can’t choose gears yourself but, in ‘off-road’ mode, if you push a ‘low’ button on the gear selector, the car will try to retain second as much as possible. And there’s no low range transfer case, but I mentioned the 627lb ft from 1,600rpm, right?

These things reflect what the Cullinan can do off-road – apart, presumably, from sink into soft mud owing to that two-and-three-quarter-tonne-before-options thing. We’re assured it’s very happy on sand dunes. But anyway, while owners will, relatively routinely, take their Cullinans off-road, where it needs to be happiest is on it.

To that end it gets a suitably opulent interior, seemingly well constructed from spot-on materials. You’d want to prod it and a Bentley Bentayga together to decide which is the better but I think it’s the Cullinan, and by a mile over a Range Rover SVAutobiography. 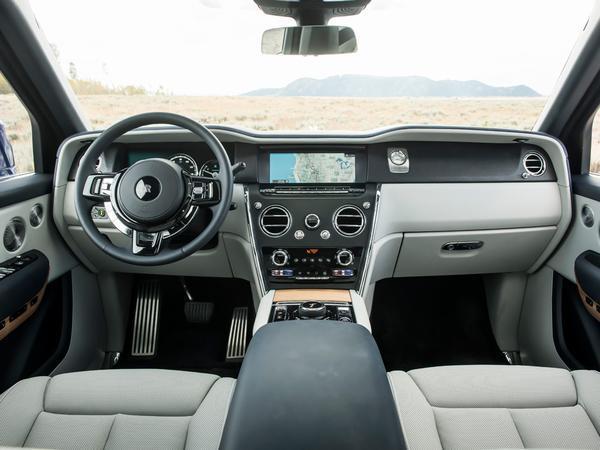 There’s 100kg of sound proofing within the body, the wheels are 21s or 22s, tyres have foam inserts to reduce their noise. The BMW-derived i-Drive infotainment is first rate, ergonomics are sound and the view out is imperious-plus. The lowish window line means visibility is very good, despite the length and a two metre width, which gives the Cullinan a similar footprint to most double-cab pickup trucks.

It can seat four or five, depending on the rear seat you spec. With two individual rear chairs there’s a glass partition between passenger cell and boot space, to increase refinement. With the three-person bench seat, which splits and folds, the Cullinan is a bona fide 560-litre plus estate car – albeit the folded rear seats don’t create a flat load floor.

Refinement levels are to Rolls-Royce standards. The V12 idles with that ‘is it on?’ smoothness and hush, step-off is smooth and the throttle pedal long. The steering has a trademark Rolls-Royce lightness and consistency, and the Cullinan rides as well as it ought to. The run-flat Continental rubber our test car ran on would not necessarily be your first choice of specification if somebody asked you to invent the perfect-riding car, but still the Cullinan rode supremely. No other SUV – certainly not a Bentley, not a Mercedes and, I’m pretty confident, not a Range Rover, rides so smoothly, and definitely not as quietly. It feels, to me, every inch as Rollsy as a Ghost, albeit with more lean. 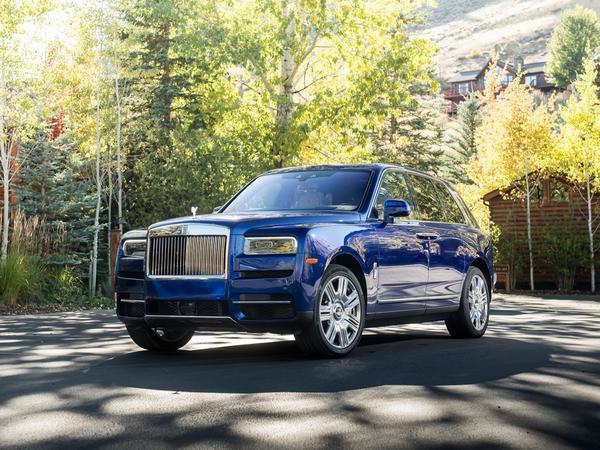 As a result, then, it’s not as dynamically adept as, say, the Bentley, but I suspect most owners will be fine with that. There are active anti-roll bars but they feel like they work less hard than some of the snazzier, beefier, systems on rivals, allowing a considerable amount of roll here. The steering’s always precise, though, and with active rear steer the Cullinan is more rewarding and, maybe, even a touch more agile, than a car with quite such an absurd kerb weight ought to be.

Perhaps unsurprisingly it’s very capable in a straight line. Performance figures are fine – with 571hp and that 627lb ft it’d be bonkers if they weren’t – and the Cullinan feels about as quick as its 5.0 second to 60mph time suggests. I’m not sure you’d want it to go any faster. But stability is terrific, and with that ride, and the hush, and a mega sound system, and a 90-litre fuel tank, few cars are more relaxing, so long as you’ve got space around you. If you were asked to pick a current production car in which to drive you and your family several hundred miles to your holiday home, the Cullinan would be right up there.

The concept might be a hard one to like. The appearance and the kerbweight could be difficult to get your head around. But the execution? There aren’t too many holes to pick in that. 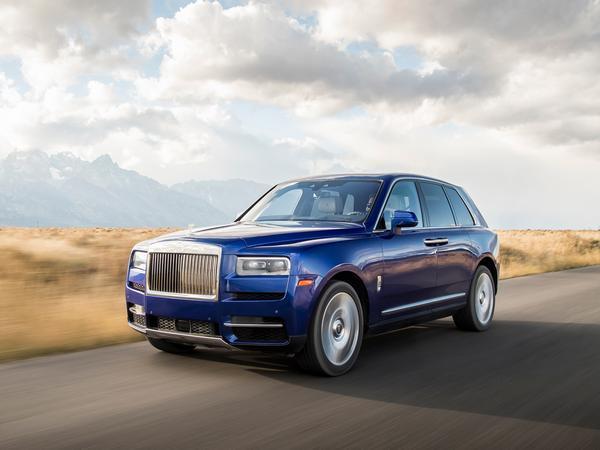 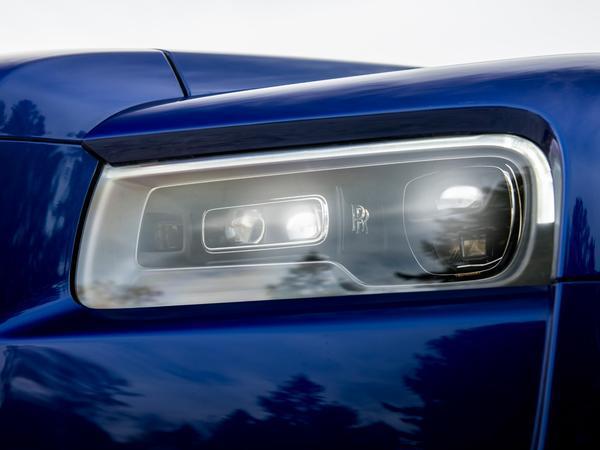 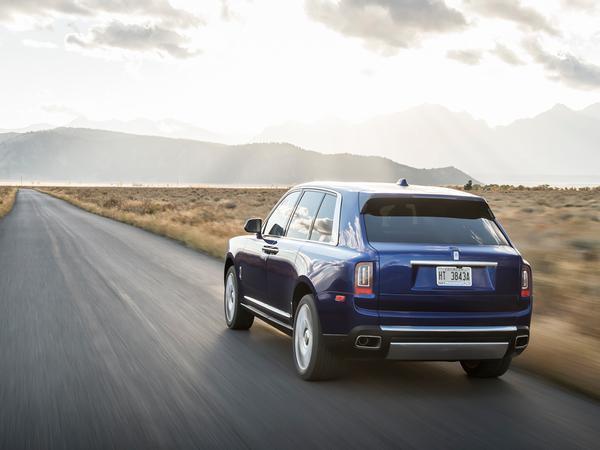 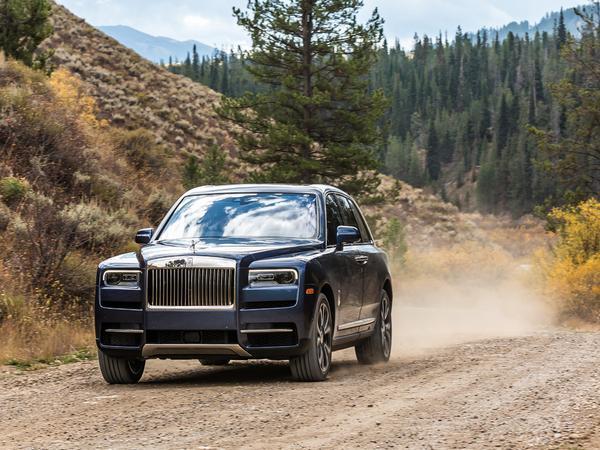 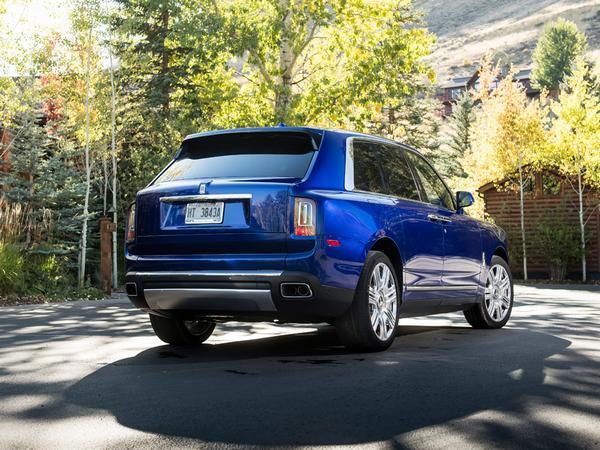 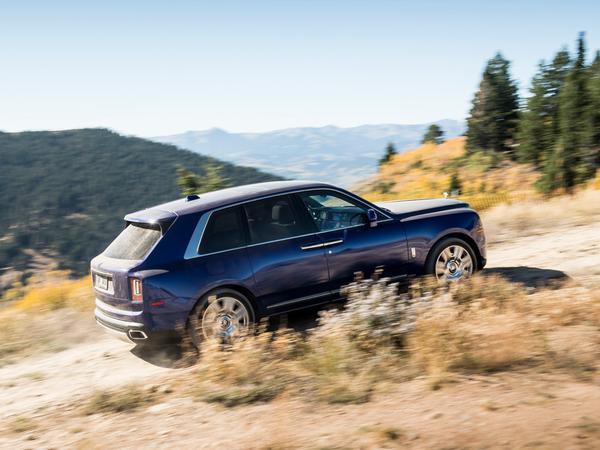 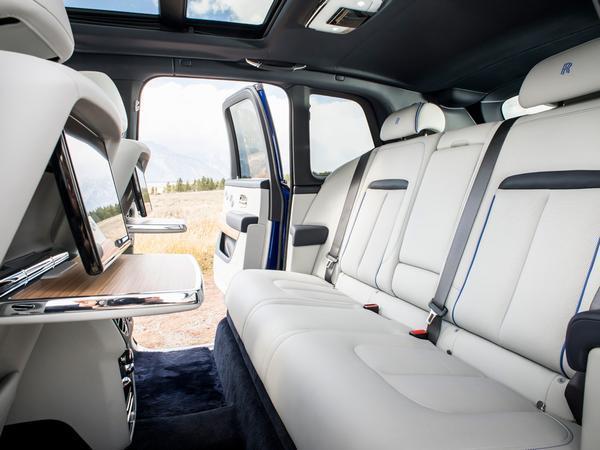