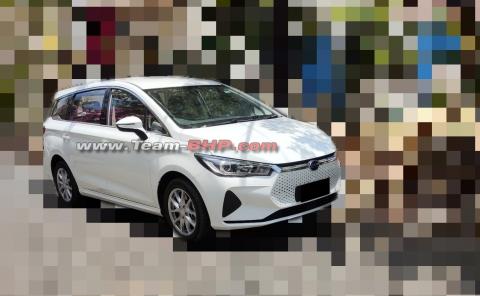 The car is expected to be launched in India in the final quarter of 2021. Initially, it will be imported as a completely built unit (CBU).

The BYD e6 electric MPV has been spotted in Chennai. The car is expected to be launched in India in the final quarter of 2021. Initially, it will be imported as a completely built unit (CBU) under the rule which allows for the import of 2,500 units without the need for homologation.

The BYD e6 looks like a typical MPV with a large greenhouse. This particular car is the second generation model. It has a perforated front fascia with projector headlamps on either side, while the rear gets sleek wraparound LED taillights.

On the inside, the BYD e6 gets a dashboard with a floating 10.1-inch touchscreen infotainment system in the centre. A unique feature of this head-unit is that the screen can be rotated by 90-degrees to switch between landscape and portrait modes. The car also gets 6-way adjustable front seats, an electronic parking brake, 4 airbags, traction control, ABS, hill-start assist and a tyre pressure monitoring system.

The BYD e6 is powered by a 41 kWh battery pack which is said to offer a range of 450-500 km on a single charge. It comes with a 40 kW AC on-board charger which has DC charging capability. The company claims that it can recharge the battery to 100% in just 1.5 hours.

We have been told that the BYD e6 could be priced around Rs. 20-25 lakh. It is one of the three EVs including a 7-seater that the company plans to launch in the Indian market.