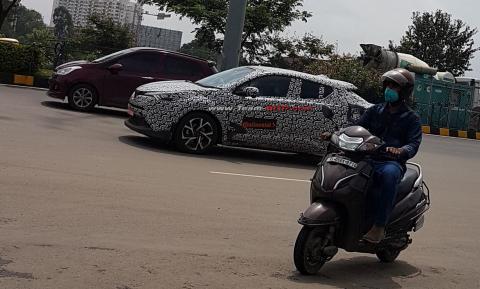 The Toyota C-HR crossover has been spotted testing in India once again.

Looking at the front fascia and the alloy wheels, this particular test car appears to be the Chinese version of the C-HR. Unlike the European version, this test mule does not have scrolling indicators and stripe brake lights. Instead, it has dot LEDs for both the brake light and turn indicators. The car does not have a rear centre reflector but is equipped with a prominent rear spoiler.

This camouflaged test mule has Continental stickers on it, which suggests that it could be testing some components.

The Toyota C-HR is based on the TNGA (Toyota New Global Architecture) platform. In the international market, the crossover is offered with a 2.0-litre, 4-cylinder petrol engine that makes 144 BHP and 188 Nm. The engine is mated to an e-CVT unit that drives the front wheels.

Thanks to Naveen for sending these images in. Heartfelt gratitude for sharing them with other enthusiasts via this Team-BHP page!