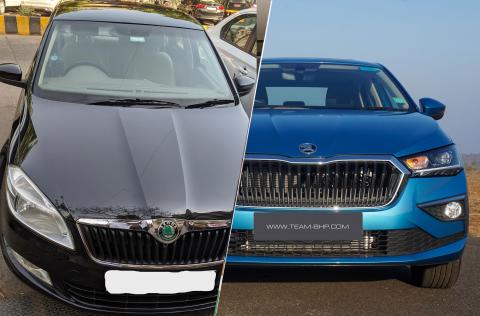 I’ve tried noting down my observations of the Slavia to the best of my abilities as compared to my 10 year old Rapid AT MPI and my buying decision.

BHPian Shome recently shared this with other enthusiasts.

A bit of background about my Rapid, it’s a pre-worshipped early 2012 Elegance variant with a TC which I had bought in 2017 just shy of 45k on the odo. It’s been our companion on numerous trips to Goa, and occasional trips to Karnataka, Gujarat, TN, J&K, Rajasthan, Delhi, UK, UP, MP…virtually all places other than the north east of India. Also, it’s the only 4-wheeler we own at this point in time and the first pre-worshipped vehicle that I’ve ever owned.

And I’ve had nothing much to complain about yet! An upgrade is not necessary but I am looking at some of the newer options available to satisfy an itch, that’s all that it is for now. We’re more biassed towards sedans as compared to SUVs, preferring better dynamics over ground clearance and commanding seating positions. I’ve been driving for over 20 years now and realized that a sedan can cover 90% of all the motorable destinations that we would end up visiting, be it in the plains or up in the mountains albeit, with some precautions and sometimes a risk or two.

Couldn’t resist showing off my 10 year old beauty after a trip to Joshimath (Auli) from Mumbai earlier this year: After the mandatory TLC: I’ve tried noting down my observations of the Slavia to the best of my abilities as compared to my 10 year old Rapid AT MPI and my buying decision. I’m only comparing those aspects which matter to me and differentiate Slavia from the Rapid.

Note: The comparison is only versus the petrol 1.6 MPI engine. I consider myself to be a sedate driver, who does not really yearn for sporty performance but I do like my car to be a good handler.

What I liked about the 1.5 Slavia:

Things I didn’t care about:

Buying decision – so what’s the verdict then?

Well, the Slavia as a package is good, looks great, will age well, similar to the Rapid, has some really nice features, great engine, is safer in terms of airbags, and slightly more spacious.

However, for my specific requirements, I don’t see value in the upgrade. 25 big ones for a slightly bigger car, similar interior quality (I’m talking about the hard plastics, and touch areas), and poorer steering feedback, which is a deal-breaker for me is not justifiable. Moreover, other than the engine, it doesn’t seem like an upgrade that merits the on-road cost.

But that doesn’t mean that the Slavia isn’t good, it’s a great option for buyers who are currently driving cars from the C1 segment or lower, or people who want to experience German tech and drivability for the first time. It’s ahead of it’s competition. With the improvement in Skoda A.S.S, things look good for the future but it’s just not for someone who already owns a Rapid or a Vento.