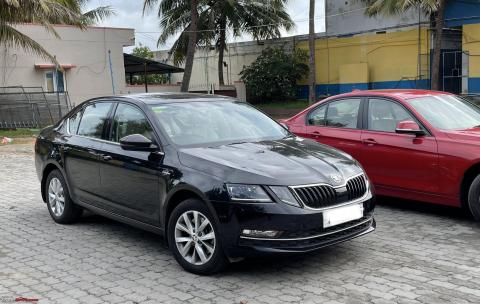 The BMW 330i Sport wasn’t easily available. The other option I had was the 330i M Sport or the 330Li Gran Limousine. However, I stumbled upon a lightly used 2019 Octavia.

BHPian sandygordon recently shared this with other enthusiasts. As mentioned by many in the forum, selling a two-year car is a big No-No.

I would lose 30% of the OTR price easily. The only way to offset that would be a lateral upgrade. Hunted for a lightly used 330i, most of them have prices that would make the EMI the same as that for a mint one.

The 330i Sport version is not easily available. The prices have been raised. The only other option I had was to opt for the M Sport 330i or the 330Li – Grand limousine which after discount comes close to 63 big ones on road. That’s quite a huge amount considering my maximum stretched budget was 50L, that too with a big loan in mind.

I stumbled upon a lightly used 2019 Generation III Skoda Octavia L&K which had done only 7k km. It had ticked all the boxes in a car which I was looking for – safety, value for money, performance and reasonable handling. It had four years warranty until 2023 which can be extended to 2025. The reliability of the DQ200 gearbox is a big issue, but I am ready for it. I felt it to be better than the new-gen IV Octavia which felt like a different car. I would not have bought the new one anyway. A used 330i is very hard to find now. Buying a new 330i M Sport is like paying an amount equivalent to your housing loan EMI which felt a bit too much financially. People are buying new 330is like crazy here. Maybe, 3 to 4 years down the line I would be able to find a reasonable pre-worshipped one with low mileage.

But Skoda Octavia, it is for the time being. If I get a good price for the Seltos, it would be like spending close to 4L for the lateral upgrade, which in my opinion is a good deal for now. The depreciation losses in my Seltos would be offset by the saving on the Octavia. In the end, taking the gearbox reliability into consideration, it would be like jumping from frying pan to fire, but I have had enough time in the frying pan. Need some time to get used to the car, but I am already loving it. Getting used to a sedan after using a taller car (I am not using the word “SUV”) is a bit of a problem especially on your ageing body, but once in place, I am at a much better place. I would miss the 360-degree better resolution camera and those ventilated seats. But I am ready to sacrifice those.

A big thanks to all here who chipped in with their suggestions. I would like to thank BHPian and friend Bibendum90949 for all his support and his time spent discussing upgrade options.

Shall chip in with the Octy experience soon. I have a long list of mods planned. So Octy it is for now. The rest of the “budget money” stays with the bank, as I won’t borrow it. Two months ago, BHPian sandygordon had posted the following about selling his Kia Seltos and requesting fellow BHPians to advise him on his next purchase. Circa 2019, I was hunting for an automatic. Eighty thousand kilometres in my humble remapped 1.3 S Cross had spoiled me. Age was catching up and the left knee was hurting during my routine drives. The budget was 20-25 lacs.

It was then that the Seltos was dropped from mid-air with a certain unimpressive Bollywood star protégé showing off his muscles in a classical Indian “baniyan”, which impressed my kids. The red color stuck, there was no looking back. My sensible friends chose the Gen 3 Octavia 1.8 TSI. The driving position was low in the Octavia and back then I wanted a commanding driving position. Moreover, the Skoda dealer at Cochin had just shut shop and I had to get the Octavia delivered and serviced at Thrissur, 70km from Cochin. Dropped the Octavia plan. Then came the MG Hector. Wifey and Kids wanted the Hector. It was huge on the inside and there was this huge panoramic sunroof that they fell in love with. For me, the Hector looked like one of those fancy European Coffins with a large steel grille on the front. Would be a fitting coffin for a “pseudo-SUV” enthusiast. Jeep compass had impressed me, but the gearbox just put me off. Moreover, only the Trailhawk had an automatic tranny. Never entertained the thought of a German car, as at that moment, all of them were out of my budget. In fact, choosing the Seltos over the Hector was a cakewalk for me, not for my family. For them, I did the mistake of choosing a small and uncomfortable “Jeep” over a large and luxurious “Innova”.

The Koreans had never impressed me. We had an Accent 1.5 GLS for around a decade. Except for the air conditioning and plush ride, everything about the car was a disappointment, especially the cotton ball steering and unimpressive, noisy NA petrol engine. Then someone said KIA was different. Took a test drive of the Kia Seltos GTX DCT. Was not a fan of the interior, but the engine characteristics impressed me. It was tractable, more like a GT TSI than my old Accent. Confirmed GTX Plus DCT and come November 2019, GTX Plus DCT in “unimpressive RED” was in my garage. We had all the Customary Pooja done and people around were impressed. My boss was not particularly happy as he felt that I spent too much on a “luxurious car”.

The DCT gearbox was a dream to drive. As I got used to the gearbox characteristics, I enjoyed it at the same time. Troubles started showing after 2-3 months of usage. The DCT gearbox started to skip gears and gave me the headache of the decade (Read the issues in my thread). Finally, after 2 months, got the car repaired and DCT stopped giving me trouble.

After spending 21 big ones, once you start to feel that you are settled, here comes the paltry 2-star GNCAP rating for the Seltos (For me it’s still 2). I travel 40-60km a day through narrow single laned highways of Kerala darting in and out of container lorry lines. Never have I felt so low or so cheated in my life. I thought that for a product as feature-rich and expensive as the Seltos, a 4+ star rating is a must and Kia should have ensured that. I have never been able to enjoy my Seltos after this. Just wanted to sell the car at that moment. However, I had this apartment furnishing coming up and we were moving to a new home. My bank balance was a joke and I could not close the loan. Stuck with the Seltos for another 10k Km. We have settled in our new home and everyone around seems to be happy. Now would be the perfect time to close the loan and sell the Seltos. The Seltos does have a very long waiting period and used car market prices are quite good. So “Sell-Toss” it will be. Then comes the next question. What car are you going to buy next?

I have compromised so much till now. I want a car that can impress me with driving dynamics and I don’t want an SUV. I chose the Accent GLS over Ford 1.6 ROCAM (for my dad) in 2004, I chose the Wagon R over Swift ZXI in 2006, I chose the Dzire VDI over the Swift ZDI in 2009, I chose the S Cross 1.3 alpha over the 1.6 in 2015. And in 2019, I chose the Seltos DCT over Octavia 1.8 TSI. This could not happen again. The same thing has been happening in my life again and again. Not anymore. I would request respected BHPians to chip in with their suggestions and save my day.

The cars I test drove till now:

Here’s what BHPian androdev had to say about the matter:

Two sedans stand out in the current market:

Absolute driver’s delight. The gap between Octavia and 330i is a lot now in terms of overall feel and it makes sense to skip Octavia to get to 330i directly even if pre-owned. Of course, this is a luxury segment, so one needs to do the math on budgeting – but given the 50L range, it is within reach if you do proper research.

Fantastic car if you have family in mind. I would say Camry is making some giant leaps with each iteration. Design (esp front is not universally liked) + wait-time might be the issues. Test drive it before saying it’s a Toyota.

Skoda has been the “default” choice for great sedans (Octavia and Superb) for a value-conscious buyer but BMW 330i and Camry Hybrid are truly exceptional in their current iteration and one doesn’t have to put up with the poor customer service of the VW group.

Here’s what BHPian GautamJ had to say about the matter:

Get the BMW, reasons?

A bimmer (BMW) will surely be expensive to keep, but a drive and experience of RWD pushing you into the seat will make you realise it was well worth the additional expense.