As a guy who has trouble matching outfits, I find myself being quite sensitive to automotive color and trim combinations. My favorite color has always been red, but I don’t necessarily favor red cars; rather, I tend to prefer red trim, like a white 1969 Coronet R/T with a red bumblebee stripe and interior.

While white tends to be inoffensive, earth tones are a different story. They increased in popularity in the 1960s, but certain greens wear a scarlet letter of sorts in today’s collector market. To contemporary eyes, they haven’t aged well.

However, I have noticed that certain top and/or interior trim combinations can make an ugly color more palatable. For example, at the Rodeway Inn in Carlisle several years ago, I caught a glimpse of a 1970 Dodge Super Bee in Light Green (FF4), a color typically considered one of the less desirable today. Nonetheless, a white vinyl top and stripe plus Cragars pulled me in. That car was hot enough to make me forget about Panther Pink (FM3).

I find it curious when enthusiasts feel that certain color combinations are mismatched or odd, like pale yellow (think FoMoCo’s Meadowlark Yellow, GM’s Butternut Yellow/Mayfair Maize/Saffron/Cameo Cream, or Mopar’s Sunfire Yellow) with green trim, a popular combo of the era. It works, folks! It’s as if enthusiasts have forgotten about the color wheel that we were taught in school. Why is it yellow and green don’t match, yet no one bats an eye when Richard Petty zooms by in his turquoise and orange racer?

Admittedly, I’m just a layman when it comes to the color wheel, but take a glance at one and you’ll notice that yellow and green are analogous colors. According to the website Color Matters (colormatters.com), analogous colors include three side-by-side colors on the 12-part color wheel. In our particular example, this would include yellow (a primary color), green (a secondary color), and yellow-green (a tertiary color, which is created by mixing a primary and secondary color). For the aforementioned color combo, pair a tint (a variation of a color mixed with white) and a shade (a variation of a color mixed with black), and we get the pale yellow and dark green trim combo that seems to have been popular in 1968 yet confounds some folks in 2018.

So let’s move to 1970 and take a gander at the all-new Dodge Challenger. While the trademark Scat Pack bumblebee stripe was a decal for performance-oriented 1968-1970 Darts, Coronets, and Chargers, the Challenger R/T’s rear stripe was painted on. This allowed Dodge to offer myriad interesting recommended combinations, with one being Top Banana yellow (FY1) with a Sublime green (V9J) stripe. Despite the change in tint and shade from the previous example above, notice how yellow and green continue to match.

What about trim combinations not recommended by the manufacturer? In the Sept. 2017 issue of MUSCLE CAR REVIEW, there was a Mint Turquoise 1970 GTO Judge with a red interior (“Groovy”), which was not a pairing suggested by Pontiac and therefore likely a special order. Taking another look at the color wheel, we can see certain reds and blues are complementary colors. According to Color Matters, pairing opposing complementary colors is a way to “create maximum contrast and maximum stability.”

The same can be said for the 1970 Oldsmobile 4-4-2 W-30 that was featured in the May 1970 issue of Hi-Performance Cars magazine. It featured red stripes on a searing Sebring Yellow paint job, which was not a factory-recommended combination but nonetheless was complementary and perfect for the day-glow trend of the moment.

Just as certain colors haven’t aged gracefully, others have changed significance over time. Take black for example: Among today’s performance cars, black is quite popular, perhaps trailing only red in trendiness. Yet in the 1960s, black was predominantly a formal color that would be more at home on a Sedan de Ville than a GTO. Black had no performance connotation during the muscle car era except for blackout trim. According to the published production statistics currently available for certain muscle cars, black was at best a middle-of-the-road color in terms of popularity in the 1960s. And green? It tended to be a color that transcended class, being popular for family cars, muscle cars, and anything in between. 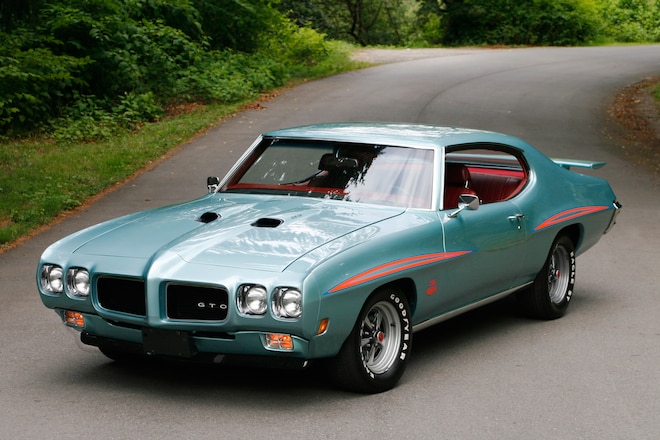