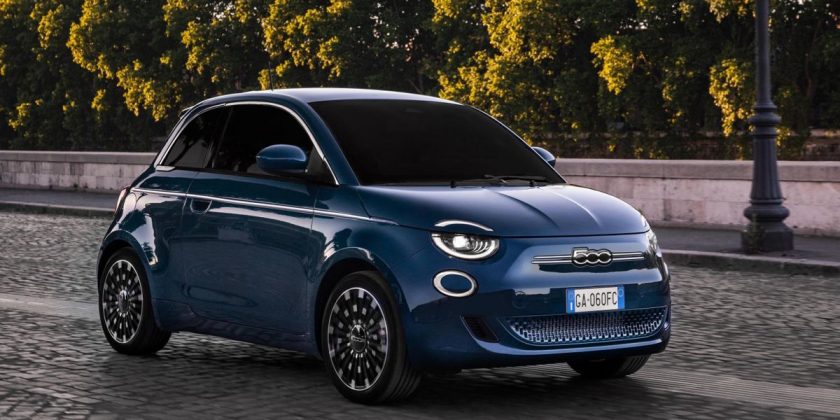 What you’re looking at is the new Fiat 500, and you can’t have it with an engine. Sorry. Following on from the convertible 500 EV revealed earlier this year, Fiat has showcased a hatchback version of the 500, and both cars are sufficiently fresh to be considered an all-new generation.

Under the familiar but tweaked body is a new platform, which houses a 42kWh battery powering a 117bhp electric motor. 0-62mph takes nine seconds, over a second and a half slower than the Mini Electric. Given the kind of driving this car is mostly intended for, however, the 0-31mph time is probably more relevant – it’ll dispatch that lesser-quoted benchmark in 3.1 seconds, nearly a second brisker than the Mini.

The battery gives the 500 a range of up to 199 miles according to the WLTP cycle, and for when you need to top it up, there’s an 85kW fast-charge system to speed things along. With a sufficiently powerful charging station, you can add around 30 miles of range in five minutes, or juice the lithium-ion pack to 80 per cent in 35 minutes.

How the plug-in 500 behaves will depend upon which of the three driving modes you’re using – Normal, Range and, erm Sherpa. Inspired by the Himalayan Sherpa “who is in charge of the whole expedition and is a guide to the destination,” Fiat says, this mode caps the top speed at 50mph, softens the throttle response and turns off the climate control plus the heated seats to save energy.

‘Normal’ is, well, normal, with Fiat describing the experience as “close as possible to driving a vehicle with a normal combustion engine”. ‘Range’, meanwhile, provides a ‘one-pedal-drive’ feature, giving much stronger deceleration when you lift off the throttle pedal. Set thusly, you’ll only ever have to use the brake when coming to a complete stop.

The ‘leccy 500 you see here is the fancy ‘la Prima’ launch edition, finished in three-layer Celestial Blue. It gets LED headlights, 17-inch diamond-cut wheels, chrome trim inside and out, a panoramic glass sunroof and FCA’s new UConnect 5 infotainment system. Level 2 assisted driving is also included as standard, as is the ‘easyWallbox’ 3kW home charger. The latter is upgradable to a 7kW output, allowing for a full charge in around six hours.

At £26,995 with the government grant factored in, the la Prima over £2000 more expensive than the entry-level Mini Electric, but you get more stuff as standard. It’s priced similarly to the Honda e, which starts at £26,160. If you want the 500 la Prima drop-top, you’ll need to part with £29,000. Both versions of the electric 500 are available to order now.

Interestingly, this isn’t the end for the old internal combustion version. Not yet, anyway – it’ll be sold alongside its fresher, all-electric successor for the time being, but as it’s been around since 2007 and is built on a 17-year-old platform, we wouldn’t bank on it sticking around too long.