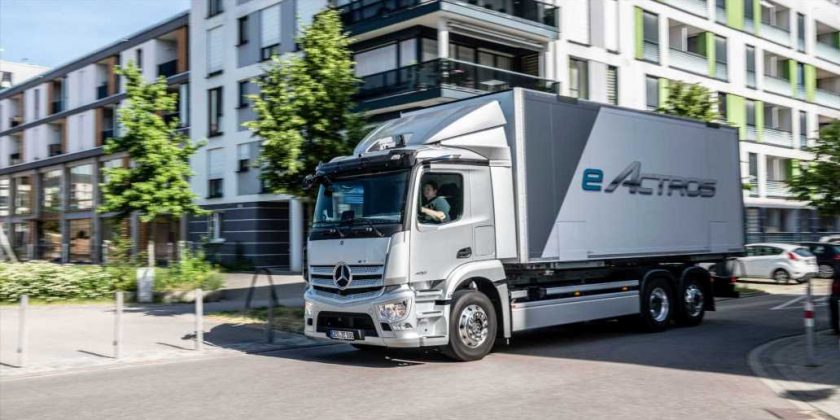 Heavy-duty hauling continues to make forays into battery-electric power, with the folks at Daimler ready to launch their own big EV. With either three or four batteries feeding a pair of electric motors, this electric truck can handle just about whatever you’d need to haul goods around a city center, without rolling any coal.

Called eActros, this giant Mercedes uses two integrated motors to feed power to a two-speed transmission that then transfers that oomph to the rear wheels. The battery packs are rated at 105 kWh each, which means the maximum capacity on this rig is 420 kWh, with the four-battery setup. Mercedes says this truck is good for 400 km, or 248 miles. That’s not great for long-haul trucking, but navigating deliveries around city centers makes this relatively short-range make sense—especially in the growing number of city centers that won’t admit diesel-powered vehicles. Mercedes says that with a 400a DC charging station, the three-battery-equipped trucks can jump from 20 percent to 80 percent of charge in about an hour.

There’s no doubt that the star of this new rig’s show is its powertrain, though Mercedes is also including some standard safety tech that the driver might appreciate. The eActros truck comes standard with MirrorCam, a system that replaces traditional wing mirrors with cameras, and active brake assist with pedestrian detection.

Mercedes says that this rig is headed to production this fall at the truck factory in Wörth am Rhein, Germany. This rig isn’t currently slated for North America, but it will be available in countries throughout Europe: Germany, Austria, Switzerland, Italy, Spain, France, the Netherlands, Belgium, Great Britain, Denmark, Norway, and Sweden. There’s no word on price, but, like most big rigs, we don’t expect this truck to be cheap.

Electrification seems like it’s getting closer every day. Do you think that big rigs will be quicker to adopt EV powertrains?