Though Maroon 5 frontman Adam Levine already took a crack at it, and a small cadre of the automotive press got to drive a prototype a few miles at low speed to tease the powertrain, the Mission E electric sport sedan continues to move at a tantalizingly slow pace toward reality. On Friday, though, the worls at least learned a name of the car that could be the first to give Tesla a run for its money. The Mission E is dead. Long live the Taycan.

The name, according to Porsche, is of “Eurasian” origin and can be roughly translated as “lively young horse.” (It’s a reference to the company’s logo, with includes a leaping steed at its center.) “Our new electric sports car is strong and dependable; it’s a vehicle that can consistently cover long distances and that epitomizes freedom,” said Porsche chairman Oliver Blume in a statement. It’s also somewhat consistent with the company’s usual naming conventions, which it describe as having “a concrete connection with the corresponding model and its characteristics”—though there’s rarely consistency in what those characteristics actually are. Boxster refers to the engine and roadster design, Cayenne implies “fieriness,” Cayman is “sharp and agile” like the crocodilian it’s named after, Macan is derived from the Indonesian word for tiger, and Panamera relates to the Panamericana rally. But hey, Porsche’s cars, Porsche’s rules.

When the Taycan finally does debut in production form sometime in the second half of 2019, it will likely look different from the images we’ve grown used to, all of which depict the concept. But the powertrain has been confirmed: Two permanently activated synchronous motors generating more than 600 horsepower combined. It’ll go to 60 miles per hour in under 3.5 seconds and to a top speed of 124 mph in less than twelve seconds. Porsche claims that multiple launches in a row will be possible without a loss in performance, and maximum range will be over 300 miles, per testing under New European Driving Cycle (NEDC) standards that are usually a bit more generous than U.S. ones.

The company today also announced that it would double its future investment in electromobility by 2020, to the tune of $7 billion going into Taycan variants, further electrification of existing models, expansion of charging infrastructure, R&D into new technology, and the expansion of the production sites for all electric models. First up will be new infrastructure to support the Taycan: a dedicated assembly area, electric motor manufacturing, and a new body shop, all in Stuttgart. 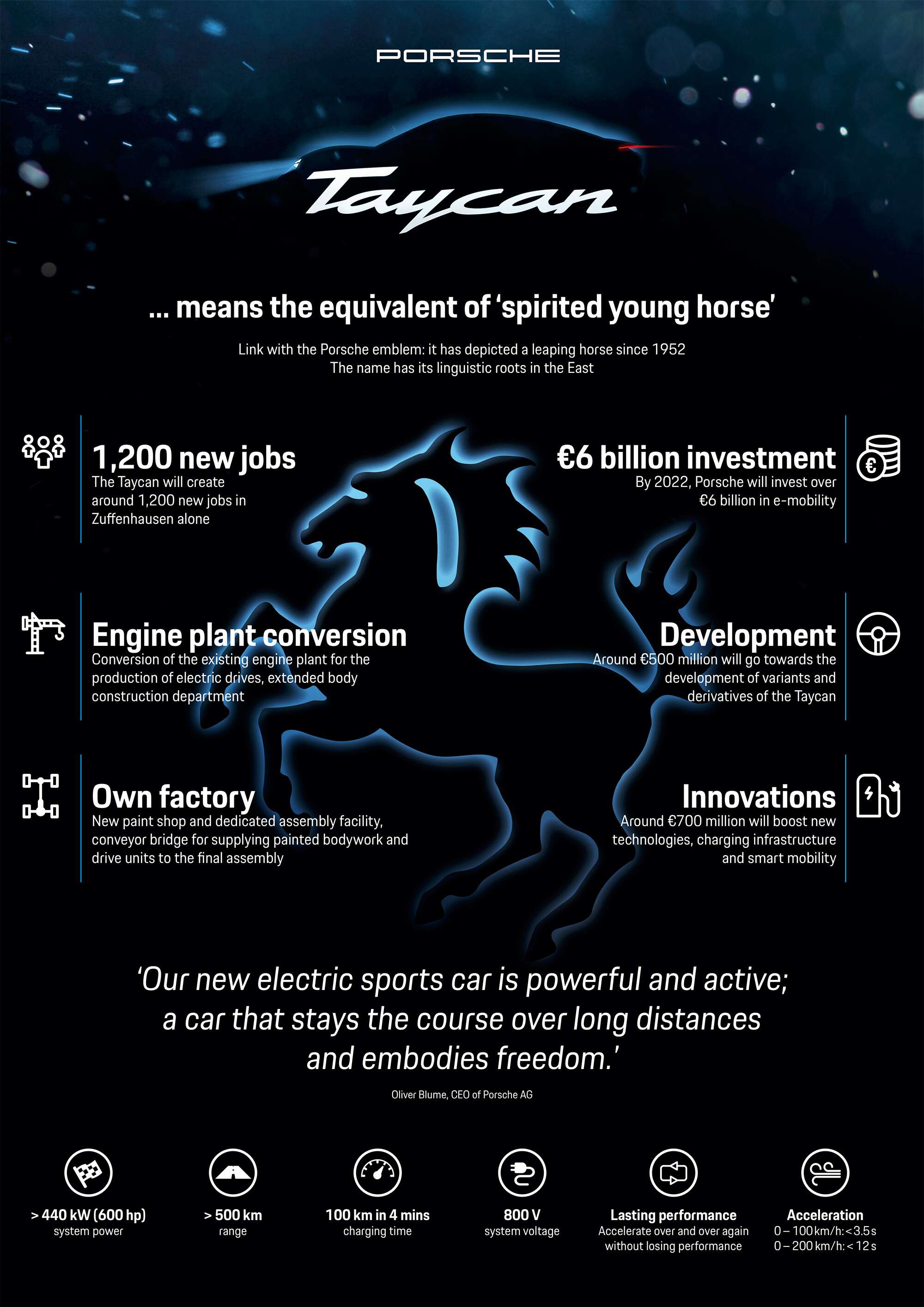 Now, sit back and watch as the Porsche fanatics debate the new name. My vote: Like its corporate siblings the VW Tiguan or Touareg—it’s a bit too…fancy, shall we say. It has flair, but it’s not sharp or particularly evocative, given how unrecognizable it is. Will that matter behind the wheel when you mat the gas coming out of a turn? Probably not.